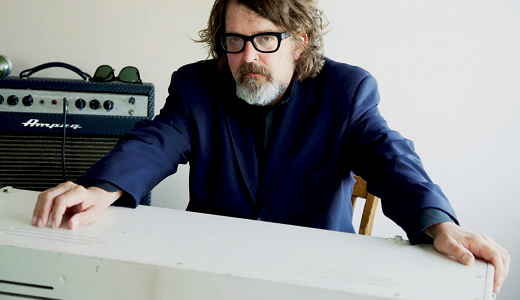 The past few years have been hard on Arsis, between line-up difficulties, the health struggles of frontman James Malone, and the less-than-stellar reception of their last record, 2010’s Starve for the Devil. Then 2012 saw them re-emerge with a new line-up, a freshly invigorated attitude, and a free EP through Scion A/V. All this did much to establish that the Arsis of old had indeed returned. Expect plenty of classic Arsis songs mixed with new rippers from their recently released album, Unwelcome, which has been getting heaped with deserved praise. Joining them is a trio of talented local acts, each with a different sound: the grim frenzy of Esoteric Burial; the melodic energy that flows freely from Dysphoria; and the always-challenging gentlemen in The Oedipus Complex. —Austin Weber

Talk about a (sort-of) world premiere! The Chicagolanders just yesterday dropped their stellar sophomore album, Peach, and now here they are in your face, planning to smack you upside with their ’60s-psychedelia-meets-’90s-Britpop grooves. Having won over fans with performances at the Austin Psych Fest and on tour with The Warlocks, Ringo Deathstarr, Spindrift and more, the poppy newgazers went back into the studio with producer Brian Deck (known for his work with Califone, Modest Mouse and Iron & Wine) to turn out their latest chapter. Fans of pop-psych from Syd Barrett to the Stone Roses will be delighted, and, hey, dudes — this is something the girls are going to be into, so if you’re looking to make a new friend, this is your best chance on a Wednesday night in Louisville. —Peter Berkowitz

What Germantown lacks in physical beauty she makes up for with loads of personality, most notably a penchant for fun. In addition to an abundance of dive bars, the nabe throws some lively street parties, including this weekend’s Germantown-Schnitzelburg Blues Festival. Now in its fourth year, the music fest will take place outside the iconic Check’s Café on the corner of Hickory and Burnett, where an outdoor stage will feature three blues acts both nights, including headliners the Gordon Bonham Blues Band on Friday and Lamont Gillespie and 100 Proof on Saturday. It’s also worth noting that this year’s primary sponsor is Wild Turkey, so expect the rowdiness to be ratcheted up a few notches as the bourbon flows to the sound of the blues. —Sarah Kelley

The 23rd annual Americana World Festival will be bigger and, as a result, even better than ever. After years at the Americana Community Center, the festival moves to Iroquois Amphitheater thanks to a new partnership between these two south Louisville assets. As usual, the festival celebrates the cultural and ethnic diversity in Louisville through a variety of food and drinks, international crafts and goods from local vendors, and an array of music from the likes of Appalatin, The Monarchs and 100% Legal. U.S. Rep. John Yarmuth will attend and make brief remarks at 11:50 a.m. This is where Louisville meets the world. —Charles Bowles

The mental process of crafting a story isn’t so different from the physical art of hand-making textiles. Both involve skill and attention to detail, and both can result in products that keep you warm and comforted. The Spin-A-Yarn Storytelling Festival celebrates both art forms. Select locals, including Dawne Gee of WAVE-TV, will entertain as storytellers, while The Little Loomhouse will hold weaving and spinning demonstrations and explain the history of this ancient art. Tours will be given of the property’s century-old cabins, which are designated a Kentucky State Historic Site and a Louisville Landmark. Bluegrass music will set the rustic scene. The first 200 visitors at this family-friendly event receive a complimentary T-shirt, and a free shuttle is available from the parking lot behind DeSales High School. —April Corbin

It’s raining beer, hallelujah! But instead of ripping off my roof and staying in bed, I’m gonna head over to St. Anthony’s Catholic Church for Keg Liquors’ eighth annual Fest of Ale. You can expect more than 50 breweries serving up over 150 craft and import beers, and six wine distributors passing out samples of their grape goodness. The fest is a fundraiser for WHAS Crusade for Children; last year more than $9,000 was raised. Todd Antz, owner of Keg Liquors, plans to beat that amount this year. “It’s a great chance to kick back, meet people in the microbrewing industry and help out a great cause,” he says. So there’s wine and charity and general merriment — all taking place in close proximity of a spiritual place. Does this count as going to church? —Sara Havens

Culbertson Mansion State Historic Site and the New Albanian Brewing Company are working together on a special celebration of New Albany’s Bicentennial. The celebration will honor the Culbertson family’s long tradition of outdoor garden parties. The garden party, a Victorian-era tradition, will be modernized with lawn games, food by Havana Blues Tapas Restaurant, and live music by The Thumps. NABC will debut their Tricentennial Ale, a hoppy brew celebrating the next 100 years of New Albany’s future. Beer may be purchased separately for $4 a glass. Cheers to New Albany’s first 200! —Charles Bowles

Classic blues from Robert Johnson and Skip James, early Tin Pan Alley and early jazz are warmly and engagingly reconstructed by Washington, D.C.’s Bumper Jacksons on their second record, Big Horn Mama. Wait, there’s more — on the band’s first trip to Kentucky, traditional banjo tune “Jubilee” may make it to the setlist. The album contains added musicians, but the core duo of Jess Eliot Myhre (clarinet, washboard, vocals) and Chris Ousley (guitar, banjo, vocals) will bring their old-time music to Louisville. While early jazz, blues and mountain music can be over-analyzed and squeezed dry with too much earnestness, the light-hearted approach of the Bumper Jacksons serves the music much better. —Martin Z. Kasdan Jr.

Grammy-nominated singer/songwriter Peter Case has been attracting a faithful crowd of followers for more than three decades now, first as a New Waver with The Nerves and The Plimsouls, and as a solo act since the mid-’80s. His songs have been covered by a plethora of thoroughly respectable types: John Prine, Dave Alvin, Alejandro Escovedo, and even some less Austin-ish folks like the Goo Goo Dolls. Springsteen is on record as a fan. Case also has worked as a musicologist, producer and songwriting teacher. He published a memoir in 2007, only to find his story evolve as he underwent heart surgery two years later. Now the San Francisco troubadour is rested and ready to deliver a memorable night of folk, rock and soul in a room meant for close listening. —Peter Berkowitz

The Harrison County Artisan Center in Corydon, Ind., exhibits current work by Louisville artist Julius Friedman in a show running weekends through June 16. Friedman’s subjects sound soft — nature and the ballet — but the images are printed with brilliant effect on raw aluminum. Works by the well-known artist and designer are included in the permanent collections of the Museum of Modern Art and the National Gallery of Art. This is his first time to show with Harrison County Arts. The gallery is located on Chestnut Street, a block off the historic Old Capitol statehouse square in downtown Corydon, and next to Butt Drugs, which features an excellent original drugstore soda fountain. —Bill Doolittle

This exhibition is perfectly timed. The 2013 crop of blockbuster movies such as “Iron Man 3” and “Man of Steel” need a personal touch, and that’s exactly what “The Super Hero Show” does. Four artists at StudioWorks have made the larger-than-life superhero character part of their own world and, through their art, part of ours. Bradley Bohannon, Alexander Burden, Jeremy Smith and Matthew Torstick’s superheroes are gleaned from sources as varied as the Power Rangers, Tron, elite military units and mythical beings. What they have in common is the extraordinary ability to fight on the side of what’s right against the evils of the world(s), whether it be a frustrating job, brussels sprouts or bullying. We could all use a superpower now and then, especially when trying to find a parking space. —Jo Anne Triplett

Spring has been quite beautiful. Our area’s abundance of red flowers, green trees and yellow bushes has the ability to make us swoon. That’s something Jane Morgan and her fellow Plein Air Painters of Kentucky know firsthand. It’s in their job description to paint outdoors, so swoon they must. The 20-plus artists got busy and created more than 60 paintings, coupling their love of nature with Kentucky’s architectural and historical sites. The Plein Air Painters went to such locales as Frankfort, Bardstown and the Hermitage Farm in Goshen. Louisville Metro looks stunning, too, with scenes that include the Peterson-Dumesnil House and the Water Co. reservoir and grounds. Even locations as ordinary as a neighborhood street become something special when the landscape becomes as important as the buildings. —Jo Anne Triplett