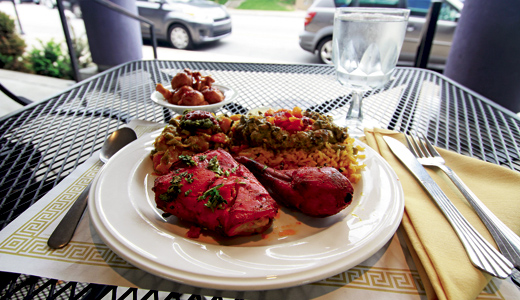 “Sitar.” Sounds like “guitar,” and sort of acts like one, too. This oversize Indian guitar-equivalent that the Beatles loved plays eerie, sinuous music that can’t be duplicated on a keyboard because it slides into the spaces between the keys.

When you think about it, Indian food is kind of like that, too. The sitar is an instrument of intriguing complexity that engages the senses with surprising new sounds that may not be familiar to Westerners but that everyone can learn to love as George Harrison did when he idly picked up a sitar and started strumming it during the filming of the movie “Help!”

Back when the Beatles were young, and so was I, Louisvillians pretty much had to travel to England to enjoy Indian food. Or, for that matter, Indian music. I still remember fondly discovering vindaloo and tandoori and chicken tikka masala and more at the countless curry houses that abounded around London’s Victoria Station.

When this region’s first Indian eateries opened in Cincinnati in the ’70s, it seemed well worth the short trip to load up on curry. It would be years later before an Indian restaurant finally came to Louisville as a permanent fixture, but since the arrival of Shalimar and Kashmir in the ’90s, and a half-dozen more now, we’re finally well-fixed for Indian fare.

Sitar — the restaurant, not the instrument — opened on Bardstown Road in 2008, a member of a loosely connected mini-chain of a half-dozen Sitar restaurants in Tennessee and Alabama. It seems to be thriving after five years, offering an extensive evening menu and drawing crowds with its smallish but well-curated lunch buffet that ranks as one of the Bardstown strip’s best midday bargains at $7.99 for all you can eat or $7.19 a pound for a takeout box.

The lunch buffet line doesn’t house an overly large selection, but it offers a good sampling of Indian flavors, with about a half-dozen vegetarian options to the left and a similar selection of meatful dishes to the right, salad in the middle and soups and dessert down at the end. We managed to sample just about all of it and judged it all above average for local Indian fare.

We came, we saw, we ate. Tandoori chicken is juicy and savory, bright red with tandoori spices and charred black edges from high heat in the tandoori oven. Veggie korma with peas and chicken korma swim in a thick creamy orange sauce made with yogurt and cashews. Chicken tikka masala comes up bright red in its thick tomato-curry sauce. Sag puts a fiery Indian spin on creamed spinach, and mildly spicy channa masala curry makes even better use of chickpeas than hummus.

Naan flatbread was tender and fresh. White basmati rice was scented with seeds; biryani rice loaded with veggies, pilaf-style. On the dessert table, I’m always up for a bowl of kheer, delicately scented rice pudding with pistachios, and gulab jamun, “donut holes” in honeyed liquid.

There’s sometimes a language barrier to service at Sitar, but our glasses were refilled and plates cleared away with the courteous efficiency I’d expect at a white-tablecloth eatery. We pretty much ravaged the buffet and got away with a $19.26 tab plus a $4 tip.

Get your disco on at APRON’s Disco Ball
APRON Inc., the new local nonprofit that helps get local food and drink workers “out of the weeds,” will host its second annual celebration and fundraiser, “Disco Ball,” on Sunday, June 2, from 4-7 p.m. at The Ice House, 226 E. Washington St.

The theme of the evening is “We Are Family,” with a live DJ playing disco-inspired music. More than 25 participating restaurants will serve samples of cocktails, appetizers and desserts. There’ll also be a silent auction featuring travel, shopping, dining and beverage products. Tickets are $40 in advance, available online at aproninc.org/events, or $50 at the door.