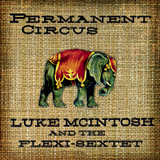 Born in Scotland, raised in Australia, currently residing in Louisville, bassist McIntosh is a strong and captivating player with far-reaching influences. Permanent Circus was recorded live last September at the venerable Rudyard Kipling with an international cast of musicians. A download-only version of Miles Davis’ “Jean Pierre” takes the 61-minute CD excursion to 81 minutes and is worth it for the fun he and guitarist Brandon Coleman, trumpeter Ansyn Banks, saxophonist Samir Kambarov, keyboardist Diego Lyra and drummer Bruno “Gafanhoto” Souza have. It provides a great bookend to the opening tribute to the Godfather of Soul, “JB,” a 15-minute funk workout. “Elle in the Morning,” a blues ballad, adds vocalist Carly Johnson and features a moving guitar solo. Overall, the album is a musical cousin to the Headhunters and post-comeback Miles, played with verve and imagination.