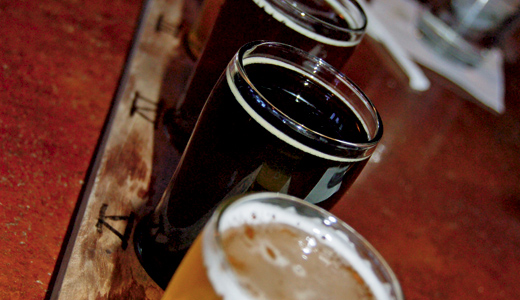 A wise man by the name of Gen. George Patton once said, “Accept the challenges so that you may feel the exhilaration of victory.” So when I proposed this particular beer challenge to my fellow dining cohort Kevin Gibson (aka The Taste Bud), he accepted without hesitation. The force is strong with that one.

We’re calling it the Lou Brew Trail (feel free to make this a real thing, tourism department peeps) — and it’s not for the timid hops lover. Louisville has five brewpubs (NABC, Against the Grain, BBC, Cumberland, Apocalypse — plus the newly opened Falls City Tasting Room) that feature original, locally made beer of many varieties. We thought we’d try to hit them all in one day, share one flight from each, order a pint of our favorite, and then document our discussion as it occurred. For better or worse, here is our drunky dialogue with nary a revision to be made.

(Unfortunately, the only day we had free for the challenge was a Sunday, so Apocalypse Brew Works was closed. Our mistake. Hey, even Lewis and Clark hit a few roadblocks along the way.) —SH

Sara: It bites my lip and swallows my tongue … like a hot make-out session in a public bathroom. Yum!

Kevin: Good intro to the American bitter. They won’t break out the heavy stuff till later.

Sara: Tastes like I’m giving myself an oil change.

Kevin: It’s tasty, but I need a knife and fork.

Kevin: Reminds me of an Indian girl I once dated.

Kevin: A hoppy red. There’s a little bit of evil that sneaks up on you, just like a redhead.

Sara: You definitely can’t trust a ginger. Would you say this beer’s carpet matches its curtains?

Sara: Is this legal this side of the Mississippi? I definitely couldn’t drink a whole glass.

Kevin: It’s delicious and dangerous. This is a beer you could almost drink in shots.

Sara: You had me at naughty.

Kevin: I’m not a fan of Belgian hops, but this is palatable. Although, it does taste a little like socks.

Kevin: After enough Belgian hops, you won’t have any taste buds anymore.

Sara: What the hell is a Wallonian? Someone who lives in the walls? If these walls could talk, would they like this beer?

Kevin: Wallonians are an ancient race of alcoholics who hit the wall way too soon.

Kevin: It tastes like a buttery nipple that has been out in the sun.

Kevin: It’s got a serious bite. Maybe the best thing to come out of Russia since those big furry hats.

Sara: What about vodka?

Sara: It tastes great and is less filling.

Kevin: I think that may be taken.

•Against the Grain Brewery

Sara: How about Slippery When Swallowing a PBR?

Kevin: It’s better than PBR but it’s not ironic enough.

Sara: You gotta love a hoppy ending, no?

Kevin: Especially if it’s a massage. And this massages my taste buds.

Sara: I was a Golden Shower once for Halloween!

Sara: Well, if I sprayed yellow water in your face, we might be married now. How’s the beer taste in your mouth?

Kevin: I’m gonna be burping this for days. It’s sour, but there’s also a weird sweetness to it.

Sara: It’s like finding money in a sweaty locker room. I need a Golden Sower for my tongue.

Kevin: It’s very malty, great mouth-feel, but not for the lactose intolerant.

Sara: It’s sweet and smooth, like Usher on the dance floor.

Kevin: Alcohol by volume is 7.5%; what’s the caffeine by volume?

Kevin: It tastes just like my pork belly. It really is like liquid pork belly — and I mean that in a good way.

Kevin: I don’t always drink liquid smoke, but when I do, it’s at Against the Grain.

Sara: They are definitely smoke-happy here … or would you say smoke hoppy?

Kevin: Don’t knock it till you’ve had it in your mouth.

Sara: It tastes like Bruce Jenner’s jock strap … from 1974. But, mind you, I think Coors Light tastes like crème brulee.

Sara: I wrecked into a home once. Just kiddin’.

Kevin: Seriously, this is delicious, but if I drink too much of it, my dog is going to lock me out of the house.

Sara: I feel like I’m chewing a cud of wheat, if that’s what you call it.

Sara: One of my favorites of the day! Three cheers for Alt!

Kevin: Agreed. I cut my teeth on this stuff; it popped my craft beer cherry.

Sara: Yumm … it’s like I’m in the basement because of a tornado warning and I have the best bourbon ever, my dog, and a cassette tape of Debbie Gibson’s Out of the Blue.

Kevin: This is the one I effusively praise to anyone who will listen.

Kevin: More American hops for me.

Sara: It’s like smelling your own breath and liking it.

Kevin: If your breath smells like this, you’re drinking too much coffee.

Sara: Coffee is third to beer and bourbon.

Sara: That’s the Danny of the beers … ick!

Kevin: I like it — I’d rather drink this than listen to New Kids any day.

Sara: Jon was my favorite — quiet, shy and less filling, like a good beer should be.

Sara: I like chocolate and I like fire. But together, they aren’t happy friends. It’s like bourbon and stout. I will enjoy you separate but equal.

Kevin: Great beer with a great mouth-feel. But it’s also telling that my girlfriend says it tastes like “college.”

Kevin: This is their version of Little Kings. At age 11, my reward after cutting the grass was a Little King.

Sara: Oh, is that the stuff you sneaked into movie theaters? I tried that once during a “Grease” revival and learned quickly that beer and sitting for long periods of time do not mix.

Sara: It’s like a blanket of puppy love … and it never has to go outside or bark.

Kevin: It’s malty and delicious. It’s like bathing in a pool of kittens.

Kevin: It’s a classic American Pale Ale. It’s solid, but not quite as good as BBC.

Sara: It’s like if ET’s fingers also shocked. It’s loving, but there’s a backhanded compliment to it.

Kevin: After 57 beers, it’s hard to tell the difference.

Sara: I taste apricot … also known as April at Epcot Center. Just kidding. I haven’t been to Disney World since I was in high school.

Kevin: You need a water, but yes, Indian hops are harsher, which is why I like the APAs better than the IPAs.

Sara: Baby, this can light my fire.

Kevin: It’s like nuclear coffee. People who love porters would love to pour this over pancakes.

Sara: So would you call it a pourter?