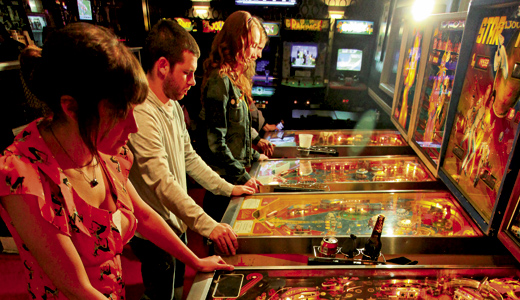 Perhaps one of the most original, laid-back and hip outside hangout spots in the city, the Garage Bar’s patio is dotted with picnic tables, a handful of grassy blocks (which I incorrectly refer to as knolls) and two ping pong tables. Unlike pool or darts, ping pong is a game anyone can pick up and play — with or without much skill or accuracy. Of course, you have your table hustlers who maneuver the paddle with incredible Forrest Gump-like moves, but if you buy ’em enough basil gimlets, you might have a chance to commandeer the game. Playing pong at night is most fun, since the tables appear to glow among the backdrop of NuLu’s hustle and bustle. Keep those fancy moves in the bedroom and volley away the evening. —Sara Havens

You needn’t have the skills of pool shark Paul Newman in “The Hustler” to get your billiards on in this place — with 16 tables, there’s ample room for even the novice player. Two long rows of pool tables anchor the room, with bar stools and four-top dining tables lining red brick walls adorned with more than a dozen flat-screen TVs. There’s also a large patio, a portion of which is heated, which in Kentucky might very well be necessary well into spring. And if pool isn’t your game, there are plenty of other diversions to suit your fancy, including two ping pong tables, darts, pinball, Golden Tee, an electronic boxing game, and old-school skeeball. Assuming you work up an appetite from all of this activity (and yes, drinking counts), the kitchen is open until at least 3 a.m. every night, serving an array of greasy grub to soak up the alcohol. In the event you find yourself closer to St. Matthews and in search of billiards, there’s a second Diamond Pub location at 3814 Frankfort Ave. —Sarah Kelley

Z-bar co-owner Antz Wettig is obsessed with old arcade games, and like other aspects of his business (craft beer, new music), he’s on trend now with his promotion of old-school pinball machines and stand-up video games. Wettig is into finding machines and restoring them, with exacting standards. The bar just acquired and restored a Muhammad Ali pinball machine, after a long search. They have around 30 machines now, and even more in storage waiting to be unveiled. (You’ve probably heard that the bar also sells drinks and food, and hosts events, when gaming regulars can be distracted from their true passion.) Wettig’s favorite is “Joust,” which the International Arcade Museum summarizes thusly: “You are a knight flying on an ostrich, battling buzzard-mounted enemies. To fly, you repeatedly hit the flap button. To topple the Buzzard-Riders, ‘the highest lance wins.’ Two-player head-to-head play is excellent.” LEO’s favorite is “Tapper,” a 1983 Bally Midway video game where a bartender has to serve patrons quickly, before they get angry. —Peter Berkowitz

The lovely aroma of BBQ wafting out of the two giant smokers outside beckon you to the Frankfort Avenue Beer Depot (FADB), which not only features arguably the best ribs, pork and brisket in Louisville, but a large back patio full of games to play while you get your drink on. Grab some putters and balls out of the locker out back to play the rather makeshift all-terrain four-hole putt-putt course known as “Beerhalla” — a considerably less snooty version of Valhalla Golf Club — or grab some paddles to play ping pong. Also, go to the bar to get your UK and U of L beanbags and play the Southern sport of kings, cornhole. If you’re a Yankee out-of-towner and not familiar with the rules, just ask any self-respecting local and they’ll be glad to fill you in. —Joe Sonka