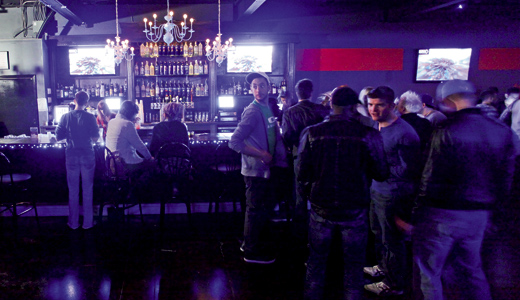 NoWhere in the HighlandsPhoto by Frankie Steele

I’ve said it in these pages before — new bars are like new babies to me, and I welcome them with open arms, whatever they turn out to be. Some grow into brawny sports bars, like the new Diamond on Barret. I watched most of the NFL season there on Sunday afternoons. However, my label of a “sports bar” might not be the same for the 21-year-old frat boy who visits Diamond for late-night concerts. His view of Diamond is completely different. The same can be applied to most labels we assign to people, places and things — we give labels to fit things into neat little compartments. But labels are limiting, segregating and subjective.

When I first took this assignment, the focus was to write about Louisville’s new “gay bars” opening in the Highlands and beyond. Each of these establishments is gay-owned and gay-friendly, but does that make them different from other bars? As a member of the LGBT community myself and by spending time in these places, I knew “gay bar” was a loose term. What I stumbled upon, however, was a full-blown discussion about the label and its gradual decline due to society’s increasing acceptance of the LGBT community. I started with Fairness Campaign director Chris Hartman, who put things into perspective. “Formerly — and in many places still — ‘gay bars’ have been necessary safe spaces for people to congregate,” he says. “As LGBT people feel more safety and acceptance in our broader community, spaces specifically designated as LGBT spots will continue to decline, but likely never disappear altogether.”

Hartman says the trend is heading in the direction of more gay-friendly spaces, like Zanzabar and Mag Bar. “First, I think the term ‘gay bar’ has been phasing out for a while, especially since the word ‘gay’ doesn’t successfully represent our whole lesbian, gay, bisexual, transgender, queer, etc. community. I think alternative, queer-friendly spaces are representative of where the trend is heading, which is toward bars and community hangout spots that are inclusive and welcoming of everyone — LGBT and straight alike.”

It turns out that all of the bar owners I talked to for this story agree. “Why do you need a separate bar that says, ‘I’m this’ and ‘I’m this’?” asks David Mattingly, one of the owners of NoWhere, which opened last month in the space formerly occupied by Amazing Grace grocery in the Highlands. “For me, I was tired of going to bars in the downtown area that put us into dark places. It wasn’t welcoming. We deserve better. We are not second-class citizens. We are fathers, we’re educators, we’re a thriving part of society. Why should we have a place that is not in mainstream America? This place is that.”

Mattingly’s hip nightclub/bar has been slammed every weekend since opening. He’s happy the clientele appears to be diverse and all encompassing, just like the neighborhood. “From what I’ve seen from the crowds, this is an ‘everybody bar,’” he says. “This bar doesn’t need a label. This is a bar for the community of the Highlands and all of Louisville.”

Across Bardstown Road from NoWhere is Big Bar, a small neighborhood tavern that has been open for a year. Owner Kevin Bryan has also been saddled with the label “gay bar,” but says it just doesn’t begin to describe his business.

“Our customers are about 70 percent gay, but what sets Big Bar apart is that it’s a comfortable, cozy neighborhood bar for everyone,” he says. “Big Bar is for people — gay, straight, black, white, Latino. We welcome all, and people feel like it’s their bar. They have a sense of ownership.”

Further down the road at the intersection of Bardstown and Alta, Jim Pfeiffer and his five business partners have been putting the finishing touches on Mixer, a new piano/cocktail bar that does a lot with a little space. Pfeiffer also shoos off the “gay bar” label and stresses that his bar is for the neighbors and diverse community that make the Highlands, well, the Highlands.

“Our philosophy is we want our crowd to reflect the mix of the neighborhood. We’ve got a bohemian style,” he says. “We don’t want any ‘ism’ here — ageism, sexism, sexual orientationism, racism. We’re just a hate-free zone, and all are welcome.”

Louisville native Todd Roman has been successfully operating the nightclub Play in Nashville for nine years. And while he’s wrestled with the “gay bar/club” label through the years, he now considers his business to be on equal footing with the other clubs. In fact, Play has been named the No. 1 dance club in the city by the Nashville Scene, LEO’s sister paper. Roman is happy to announce that he’s bringing Play to Louisville — more specifically Butchertown — later this summer.

“We’ve gotten such an outcry from the community. There was such a need for something new with more options,” he says. “We looked at a number of different cities — Ft. Lauderdale, Atlanta, Indianapolis — and Louisville seemed to be the best that we’ve seen as far as growth as a city, and the Butchertown area looked like a wonderful opportunity.”

Roman has seen the level of mainstream acceptance increase while running the Nashville location. “‘Gay bar’ is a very outdated label. With all the political movements in the community, I think people today look more toward entertainment as opposed to a ‘genre’ of people,” he says. “When we came into Nashville, we felt we were coming into a new time. Now everyone walks into our club — and you see them laugh and have a good time, and that’s what it’s about.”

The next obvious question might be: Can Louisville handle this surge of new bar business in such a concentrated area? Roman is not concerned and says it’s one of the reasons he chose Louisville to host his second location. “Our perspective on that is that we see it as a wonderful thing for the community. I think the more options there are for the community, everyone benefits.”

NoWhere’s David Mattingly points to popular nightlife areas like the Short North in Columbus, Ohio, and Northalsted in Chicago as examples of how clusters of bars can succeed. “That’s what we need to do here,” he says. “We all have our niche. I don’t think anyone else is doing what we’re doing.”

The Fairness Campaign’s Chris Hartman agrees. “I’m a firm believer that if you build it, they will come,” he says. “Louisville is poised nationally to become one of the next epicenters of alternative arts, music, food and entertainment culture. The more our city has to offer in these areas, the more attractive it will be for everyone — residents and visitors alike.”

Now that the serious discussion is over, let’s check out the new bars:

Big Bar (1202 Bardstown Road) — The smallest bar with the biggest name, Big Bar has been open a year and already has a stable of regulars (myself included). They offer karaoke during the week, throwback videos and DJs on the weekends, a bottomless mimosa/bloody mary special on Sundays, and a patio that is inviting even during frigid winter nights thanks to a few heaters. It’s the perfect spot to chill out, people watch and catch up with friends.

NoWhere (1133 Bardstown Road) — Hipsters flock to the dark corners near the pool tables, clubbers bounce on the massive dance floor to the DJ’s beats, and the rest of the mixed crowd fills out the patio and bar area discussing the day’s highlights, catching up with old friends or simply surveying the scene. NoWhere reminds me of the defunct @tmosphere but with far fewer shady areas. It’s the perfect spot if you’re single and willing to mingle … or just lust after the sexy bar staff.

Mixer (1565 Bardstown Road) — Part piano bar, part upscale cocktail bar, Mixer offers a quaint atmosphere you can’t find anywhere else along that block of Bardstown Road. The star of the show is the large Grand Piano that can play or be played. There will be bartenders who sing, patrons who are encouraged to sing along, and even replays of famous concerts (Cher, Streisand … gasp!) set to the piano. Outdoor seating and a hybrid of a beer garden and cabana out back are also planned. It’s the perfect spot to catch up with neighbors and shake off the week.