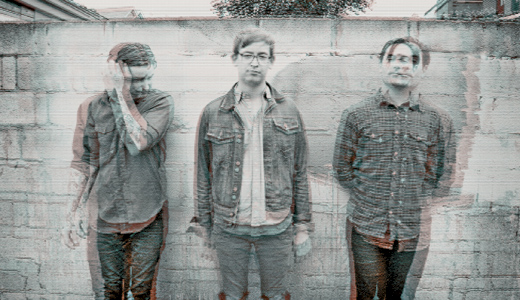 Rock ’n’ roll curmudgeons have called the genre “just noise” since its 1950s inception, but few bands embrace that description by creating tightly crafted post-punk quite like METZ.

Originating from the sleepy government town of Toronto, Canada, Hayden Menzies, Chris Slorach and Alex Edkins have been playing music together for more than four years but just released their breakout self-titled debut album in the fall of 2012. The post-hardcore feel of the record combined with succinct song titles such as “Headache” and “Rats” give the listener a feeling of urgent hostility toward the industrial feel of their town’s surroundings with no blatant outcry of message or politics.

“The first couple of years we were playing, it was us just trying to figure out what we wanted to do musically,” Edkins explains. “So we put out a couple of 7-inches and learned what we liked doing and what we were good at … it took a little while for us to feel confident enough in a group of songs that we wanted to put together in an LP, so that was kind of why it took longer than most bands do. But looking back, I think we’re pretty content with the fact that we did it that way and didn’t rush it.”

Not only did years of honing their craft allow Edkins and the other members to create the tight instrumentation of their first full-length, but the band also insists upon writing songs collaboratively.

“We all do different things when it comes to writing, but most of the time, to get the right energy, it involves the three of us playing loudly in the same room in a kind of live dynamic so that we know if it’s going to work or not,” Edkins says. “So that’s where the collaborative part comes in, because we need all three elements there to know. But often writing and arranging comes after that, as we just build on that foundation.”

Touring has kept the band from advancing much on this front (along with a food poisoning incident in Vermont and the bad timing of being in the Boston area during last month’s bombings), but Edkins revealed they finished one new song when they returned from their European tour and are excited to resume the creative process when they return to Canada.

“I think we just want to make a better, more diverse-sounding record for the next one,” Edkins says. “I think the songwriting will be better and is progressing, and as long as we do that, I think we will all be satisfied.”

But until then, METZ continues to move from town to town, getting loud wherever they go. Having personally booked their show at Zanzabar next week, the trio is excited to be making their way to Louisville for the first time.

“We’re good friends with (Young Widows), we love those guys,” Edkins gushes. “They came up to Canada once when they were on tour, and we played with them years and years ago when we were just getting started. Same goes for (Louisville band) Coliseum. We’re totally excited to finally play Louisville, because they have been telling us to come down and play forever and we finally get to.”