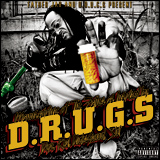 Never mind the Fiona Apple-length title above, the long in-the-works new album from Father Jah may just be the best of his career. While not without its problems (the nauseating “NFL,” the poorly executed “Find a Way”), producer D.R.U.G.S. Beats gives him his most sonically satisfying of his two decades of activity. Embracing his self-described “intelligent ignorence (sic)” this time out comes off more balanced than the schizophrenic nature of his earlier work. From the street stories of “Exotic Vegetables” to the boom bap of “Lovin My Life (One Love)” and crew cut “WWE=MC²,” Jah has come in to his own as a writer and performer. He may never break out of city limits, but Louisville’s elder statesman of hip-hop finally has a record worthy of the respect he garners from his fellow emcees.