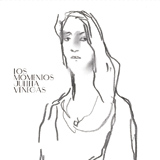 On her sixth studio album, the “studio” was Julieta Venegas’ home. Momentos is a bare-boned display of an enlightened soul, starting with the vague outline of Venegas sketched on the album sleeve. “Hoy” opens a new “day,” like a fresh page in her eclectic catalog, and is renewed by an unofficial children’s choir. But other moments aren’t so uplifting. “Tuve Para Dar” confesses the pain of a failed relationship, a place where “no promises made it out alive,” set over a beautiful homage to synth-driven melancholia. Each song is alluring in its own stylistic flare. She resurrects the melodic edge of her earlier records, where her voice was a razor against minimal, electro-accordion beats. That was only the beginning of her place in Spanish pop. Whatever the language, Julieta Venegas speaks to any lover of music.