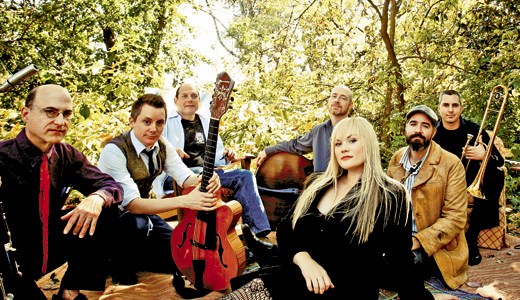 Liberation Prophecy has been on hiatus for a few years, but saxophonist/composer/leader Jacob Duncan is ready to move the eclectic band forward again. Their first record, 2006’s Last Exit Angel, evoked comparisons to a wide range of mostly jazz musicians, from Charles Mingus to Carla Bley, with Frank Zappa thrown in for good measure. The new album, Invisible House, stretches in even more directions, with folk and world music thrown into the mix.

“I started thinking about music in different ways,” Duncan says. “I wanted things to be more story-oriented. I wanted to really feel emotion when I heard songs, heard music. (On the new album) there is more emphasis on song, melody and story. Before, it was actually more composed, Zappa-esque, Sun Ra, there were a whole bunch of things happening.

“In terms of traditional jazz elements, there were very few on the first one,” he continues. “But in terms of jazz, I actually feel that it’s completely in the tradition. We didn’t have the swing element on the album, but I don’t think of jazz that way. I feel there are a couple of different definitions of jazz. One would be what was jazz, one would be what is jazz. Jazz has kind of amalgamated into world music, many different cultures coming together in many different melodies. Sometimes there’s an obvious improvisational aspect, other times it’s more subtle. But in terms of the elements on this new album, there is improvisation. We are using rhythms from now, so we are in the present.”

With most of the songs having lyrics, Duncan discussed the collaborative process of songwriting, putting his work into historical perspective. “The album does have melodies that I would say have a lot of correlation to the American Songbook. There’s a tradition of lyricist and composer that I feel is incredibly strong in the American Songbook; in fact, off the top of my head, I can only think of a couple of songwriters who didn’t have partners, Cole Porter and Irving Berlin. Most everyone else was a team, the Gershwins and so forth. I feel that all of that is in this new album. I feel that it’s also very diverse.”

Throughout the conversation, Duncan emphasized the importance of community. “Another element of old jazz is it’s territorial. The lyricists and songwriters and the band are from this region, right here in Louisville, Ky. I am super proud of this album. So to me, it’s a throwback in some ways to the ’30s; some of that music didn’t have all these improvisational elements, but it had the swing. This new record does swing sometimes, but not in the same sense.”

Invisible House has 10 songs, three of which are instrumentals. The rest feature vocals, with lyrics by Duncan, Will Oldham, Greta Smith or Joe Manning. Duncan says he had a lot more material, but “I picked the songs that I felt were the most personal. If I listen to a song and feel like it was memorable, I wanted it on the album. There might be jazz melodies that might be fun in a live show, but when I think of an album, I think more of walking into a room of paintings, or (reading) a book of short stories. I want it to be personal, and I want it to have context within the album, and I want everything to relate to each other. I don’t want it to just be a meandering effect.”

This brought up the difference in Duncan’s approaches between recording an album and playing live. “Live — there’s going to be some surprises! We are going to rip it up a lot more, more soloing, whatever happens in the moment, it’s really in the moment that we’ll find out,” he laughs.

Duncan also brought up his philosophy as it related to the band name, noting first that he believes the music includes a good balance of genres. “It’s difficult to say it sounds like anything. I would rather that people listen with an open mind, and that the starting point be liberation. At this point in my life, liberation equals love, trying to drop all assumptions. It’s not revolution or overthrow, it’s love and connection.”