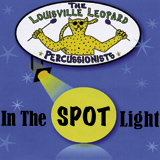 It’s a shame the LLPs (who are between 7 and 12 years old) weren’t aren’t around for 1970s game shows, because their millions o’ mallets and sticks approach to jazz (and often, by accident, swingin’ bachelor pad lounge music) would have been perfect for those leisure suit-wearing hosts. For their fourth studio album, the collective has recorded another set of fun tunes from Basie and Parker, Davis and Waller, as well as Mozart, the Jacksons and Rush (yes, the power-trio Hall of Famers) and more. Musical director Diane Downs has again selected a winning group of titles, from the “Rocky & Bullwinkle” and “Angry Birds” themes to a smattering of Cuban-themed classics (Ray Bryant’s “Cubano Chant,” “Besame Mucho,” “Manteca”). What the kids lack in Lincoln Center-level experience is more than made up for with heart and soul.