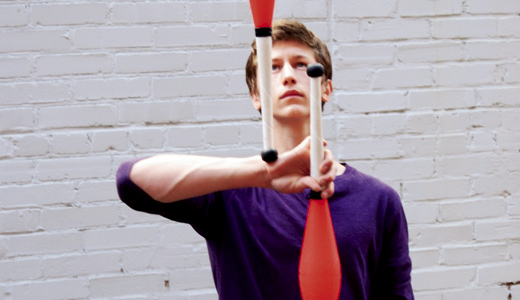 Nathan Biggs-Penton has been juggling for the past six years, but now he is in the biggest juggling act of his life. Biggs-Penton, 17, a junior at the Youth Performing Arts School (YPAS), has been noticed internationally for his skills. Earlier this year, he auditioned for the École Nationale de Cirque (Nation Circus School) in Montreal, Quebec. And now he has been invited to study at the Swedish University of Dance and Circus in Stockholm, Sweden. In order to raise funds for his trip, he’s doing a series of donation-only shows that will showcase his juggling abilities.

LEO: How did you first get into juggling?
Nathan Biggs-Penton: Originally, I lived in Winchester, Va., and a friend of mine brought me to a new store that just opened up called Incredible Flying Objects, which is just kind of funny. It was a toy and magic store, and they had some juggling props. Both the owner and his son were jugglers, and they would teach people how to juggle. I thought it was really cool. I lived five minutes away, so I just kept going back and got to be pretty good friends with them.

LEO: How do you perfect your craft?
NBP: A lot of my friends have coaches they work with more directly in a circus program, but it has always been just for fun for me. Since I moved here, there is not a huge juggling community, so I’m just on my own and I watch YouTube videos to get inspiration … most of the time I juggle whenever I’m not doing something else.

LEO: What’s your favorite thing to juggle?
NBP: I prefer clubs. In my opinion, there are more things you can do with them — you can balance them, you can roll them around your body because of the shape. There are tons of things that you can do with a club that the dimensions of a ball or a ring don’t quite give you.

LEO: Talk about this opportunity in Sweden, how did you learn about it?
NBP: I had been talking to the juggling coach (Jay Gilligan) in Sweden because I had been interested in a couple circus schools, and you have to go and audition live. I was interested in going to Sweden, but due to financial troubles, I wasn’t able to go over there. But after talking to him, he was interested in having me come to the school, so he is working on figuring out how to have me be a foreign exchange student at the school for a year.

LEO: What do you think you can learn by going to Sweden?
NBP: Some of my favorite jugglers in the world went through the school in Sweden, and the juggling coach (Gilligan) himself is a huge inspiration of mine as a performer, juggler and creative thinker. The process they have is great; the coach has several distinct processes he uses for some of the creativity. He has a very distinct way and formatted way of how you can use simple ideas and get beautiful (juggling) sequences.