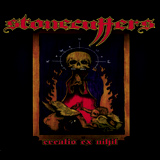 Good news, guys, we found Riki Rachtman! Turns out he was hiding inside the new Stonecutters album, Creatio Ex Nihil (Latin for “Creation from Nothingness,” apparently). Fans of the old, real “Headbangers Ball” will be thrilled by the new collection, and any thrashers who just woke up from a 1988 coma will not be surprised by Stonecutters’ traditional approach to the style popularized by Anthrax, Megadeth, Testament and other skateboarding-friendly dark lords. Some of the genre’s favorite tricks are employed, like the standard slow classical guitar intro merging into fast and heavy guitar riffage. While some mad-at-everything lyrics might be too typical and expected, the musicianship is top-notch and tight. Also, bonus points go to the band for choosing Dave Pollard’s typically dark but beautiful artwork, for those who buy the physical version.