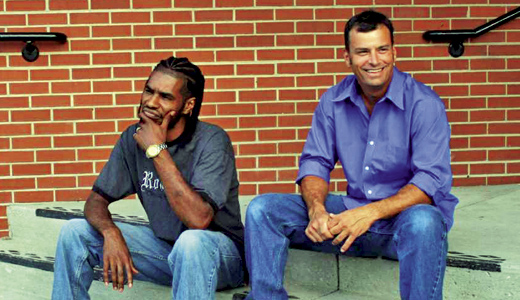 Rich Regains and Cleveland have been close friends and cohorts for more than two decades. They’ve been starving artists and road warriors and personal confidants through growing up, marriages, divorces, the pangs of starting families and everything in between. And they can still get on stage and laugh about all of it together, two brothers-in-arms who have somehow made it out of the fire in one piece. One has worked with Dave Chappelle, the other with Larry the Cable Guy — but what do they say about paths diverging in a yellow wood? This weekend, they’ll bring their “The Black Guy/White Guy Show” back to Comedy Caravan for a long overdue reunion. And as an added bonus, the shows will also be recorded for broadcast on the SIRIUS Satellite Radio Comedy Network.

LEO: Cleveland is coming out of retirement to do a whole weekend, huh?
Cleveland: I’m coming out of retirement for these shows. Comedy is like an ex-girlfriend that may kill me, but I always think maybe this time is gonna be different; this time she’ll have learned her lesson and be nicer to me. But Rich called and said they had offered him a weekend at the Caravan, and said, “There’s no one I wanna do it with but you.” I hadn’t played it in two years, and he hadn’t been there in three, so it was kinda like a homecoming for us both. So for that weekend we have a lot of comedians, a lot of old-school comedians, coming out of the woodwork to perform as well.

LEO: Is “The Black Guy/White Guy Show” a thematic show as far as material?
Cleveland: Anytime Rich and I get together, that’s what we call it, “The Black Guy/White Guy Show.” But no, the funny thing is it has nothing to do with black or white — we’re just really good friends who so happen to be a black guy and a white guy.
Rich Regains: We just notice all the things that make us alike and the things that make us not alike, and love talking about them.

LEO: So it doesn’t end up being a night of just racial comedy?
RR: It’s stuff we all like — hot sauce and white women — the things we can all agree on.

LEO: How long have you done this show?
Cleveland: We’ve been doing it for 15 years, but this is only the second time we’ve brought it home to Louisville.
RR: Over the years of being on the road together, we’ve fought our way out of a number of honky-tonks, so this show has always been this show. It was only later that we started calling it the “The Black Guy/White Guy Show.”
Cleveland: And that’s only because “The Blues Brothers Meets Blazing Saddles” was too much of a mouthful.
RR: When the two of us do a show, no matter the size of the audience, it will turn into an intimate show. That’s why they used to send us out to do one-nighters in East Undershire, Ark., where they’ve never had comedy before, just to test the waters.
Cleveland: We were like the trailblazers for all the other comedians on the circuit — we’d have to play it first. We carved a path, we were like the Reservoir Dogs. We came in and cleaned house. And no lie, in the beginning, it was like the first 15 minutes of “Saving Private Ryan” — it was a bloodbath.