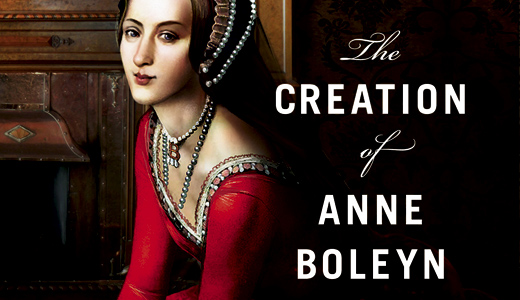 ‘The Creation of Anne Boleyn: A New Look at England’s Most Notorious Queen’
By Susan Bordo. Houghton Mifflin Harcourt; 368 pgs., $27.

When Anne Boleyn, Queen of England, left her rooms within the Tower of London to be executed on May 19, 1536, few could have imagined that her impending death would be not the end, but the beginning of her legend. Accused by her husband, Henry VIII, and his chief henchman, Thomas Cromwell, of adultery, incest and treason — charges nearly all serious historians consider to be without merit — she was convicted in a sham trial and was supposed to die in disgrace, her besmirched name spoken only in hushed whispers. All traces of her reign were being blotted out as she approached the scaffold. The intertwined Hs and As in the wooden paneling at Hampton Court Palace and official portraits were being removed and destroyed, ready to be replaced by the likeness of Jane Seymour, her lady-in-waiting turned successor who had caught the eye of the king.

Yet in the centuries since her death, Anne has had the last laugh on her lecherous husband, capturing the imagination of scholars, artists and a wide swath of the general public, a regal chameleon whose image has changed with the times. Her stunning evolution is the subject of Susan Bordo’s enchanting “The Creation of Anne Boleyn: A New Look at England’s Most Notorious Queen.”

Bordo, the Otis A. Singletary Chair in the Humanities at the University of Kentucky, where she teaches English and Gender and Women’s Studies, is known for her feminist critiques of modern culture. When a young writer from England approached her to collaborate on a book that was to be titled “The Anne Boleyn Diet,” which would have examined famous women who broke the rules in the pursuit of pleasure, Bordo was intrigued. She began researching the proposed book’s title character. And then she couldn’t stop.

Like so many before her, Bordo fell under the spell of Anne Boleyn, reading every book she could get her hands on, watching countless movies and documentaries, engaging in scholarly debates with the fervor of a new convert. She started to see the specter of Anne in her young female students, many of who were struggling with their femininity in these complex times. She grew frustrated when encountering the old fables and stereotypes about Anne in the cultural imagination, a realm where “fantasy, not fact, rules.”

“The Creation of Anne Boleyn” is a search for the real Anne, one that finds Bordo analyzing biased diplomatic dispatches from the 16th century; deconstructing Anne’s physical appearance and alleged flaws; tracing her various incarnations as whore, saint and victim; and examining contemporary depictions of her, including the classic film “Anne of the Thousand Days,” Philippa Gregory’s wildly inaccurate novel “The Other Boleyn Girl,” and the popular Showtime series “The Tudors” — all in an effort to explain why this Tudor queen has lived “a hundred lives, forever.”

The journey is an engrossing one, blending biography, cultural history and literary analysis with a creative writer’s knack for narrative and detail. Bordo’s prose crackles with intensity as she makes the persuasive case that Anne reflected a culture in transition with regard to the role of women in public and private life in Tudor England. “Henry’s attraction to Anne,” she believes, “seems to have been fueled not only by sexual attraction but by common enjoyments, compatible interests, intellectual stimulation, and shared political purpose” — ingredients that were not typically part of medieval marriages. The outspoken Anne, Bordo argues, repeatedly inserted herself into the realm of politics — a man’s dominion — a decision that ultimately laid the groundwork for her demise.

After the many faces of Anne have been analyzed, Bordo observes that this 16th-century queen has emerged as an unlikely icon to many young women today who “have created their own Anne, patched together out of those pieces of the media images that they find attractive.” She finds that “they identify passionately with, or aspire to, this many-sidedness,” recognizing in Anne a kindred spirit.

With “The Creation of Anne Boleyn,” Bordo makes a persuasive case for Anne’s continued cultural relevance, separating historical fact from fiction in the process, all the while explaining why this Tudor queen of but a thousand days persists in seducing us still.

Jason Howard is one of those Howards — descended from the family of Anne’s mother, Elizabeth Howard. He is the author of “A Few Honest Words.”