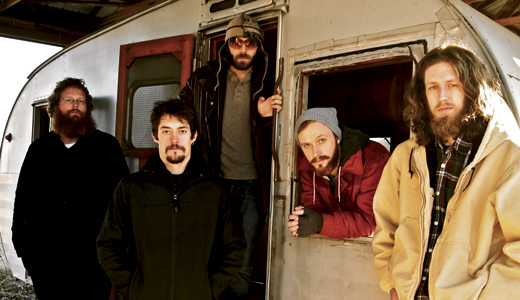 Shadwick Wilde was once a true punk and toured with the bands Iron Cross and Brassknuckle Boys. Now older, matured and more inwardly focused, he carries on the trajectory of countless punks before him by evolving into an alt-country troubadour. His current band, Quiet Hollers, formed in 2010 after the release of his first solo record. Now the full-time quintet is releasing its debut, I Am the Morning, with a release show Saturday at Headliners.

The album was one of the last recorded at Kevin Ratterman’s Funeral Home studio, and it had its own noteworthy drama to deal with going in. Drummer Nick Goldring sustained a teardrop fracture of his C5 vertebrae in a diving accident, breaking his neck.

“Less than a week later, he was playing shows again,” Wilde says. “He did the whole record with a neck brace on. The only thing he really couldn’t do was turn his head or carry his drums,” which the band did for him.

“I have a sneaking suspicion he might have worn the neck brace a little longer than he needed to so he wouldn’t have to carry his drums,” laughs the singer-songwriter.

Wilde says he hopes to help break down local cliques with some of the other bands at his show, with Discount Guns’ harder blues-rock, the Downtown County Band’s bluegrass perspective, and Mercy Academy’s indie folk-rock.

The after-party promises to be another example of similar-but-different fun as Wilde’s day job, the Mag Bar, hosts the celebrants. Having already worked the crowd at Headliners, Wilde expects to wind up working the crowd behind the bar at the Mag, at least for a minute. “The Mag Bar has been really supportive of the band … Last tour, they actually gave us a gas card if we’d wear Mag Bar T-shirts and put up stickers everywhere we went. I’m very fortunate to have such a supportive employer.”

Sure beats working for a law firm. “Yeah, but I might have a chance of actually making money if I did that.”