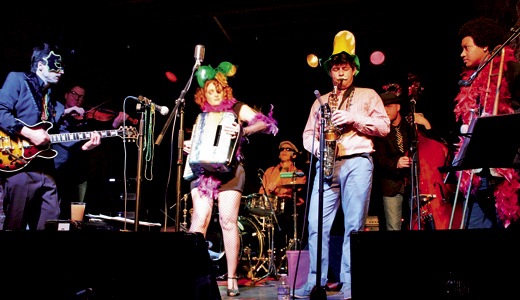 Mark Hamilton has played in many Louisville bands. But it took a trip to New Orleans for the guitarist to find the inspiration to start a band of his own.

The Billy Goat Strut Revue was founded in 2011 to play the “antique jazz” of the 1920s and ’30s, with the players’ respective Kentucky flavors added. It’s riverboat music, perfect for boozy journeys down the Ohio and outrunning sheriffs and husbands. Hamilton put the band together one at a time. He’d ask, “What do you think of this idea?” Some musicians liked it; they became members.

Their first gig was with vocalist Brigid Kaelin. When she moved away, she recommended Laura Ellis, who had sung and played accordion with Shine-Ola for a decade.

“I’m like the imposter Brigid,” laughs Ellis. When the original had to leave, the part was recast, as on “Roseanne.” “I’m like the second Becky!”

The band started out backing for burlesque dancers. At first the dancers were supposed to be the main focus of the evening. Eventually, the band became the stars, with the dancers providing added value. “It was like a partnership — we’ll provide live music for burlesque dancers, and in between while they change, we’ll play some other stuff,” Ellis says. “That was really fun, but then you’re talking about seven people in the band, five dancers, everybody wants to get paid, nobody can practice at the same time … whew, it was a lot.”

How did they manage it?

“Well, we really didn’t,” Ellis says, and she and Hamilton laugh. On their fifth gig, the band played a wedding and realized they could hold a crowd’s attention on their own. “I hope we get to play with them again someday,” she adds.

Their debut album, This is Bourbon Jazz, will be released at a show at Uncle Slayton’s on Friday. The songs are all covers, chosen by various members. “We’ve talked about (writing new songs),” Hamilton says. “It would be really cool. We’ll see what happens. Right now it seems fresh to breathe new life into these old tunes.”