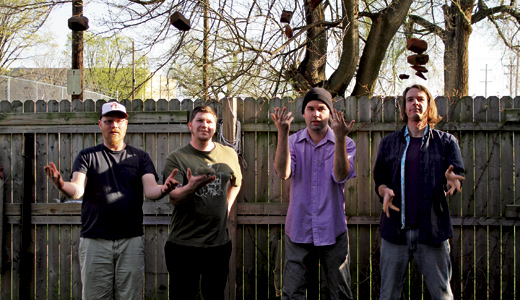 For about a decade, The Teeth have made some of the finest No Wave proto-punk you’ve probably never heard. An early career plagued by line-up changes has ultimately resulted in the current iteration of Matt Dodds on guitars/vocals, J.R. Rector on drums, Ben Herning on vocals, and Brad Anderson on bass, as The Teeth.

On both their longevity and ability to endure, Dodds muses, “Every time someone has left the band, or we lose our practice space, or one of us nearly dies or whatever, J.R. has kept working on how to recover and carry on. Me and him have been really good friends for probably over 20 years, so there’s that, too.”

The Teeth’s second full-length on Noise Pollution Records, recorded in a warehouse between fall 2011 and summer 2012, is called Brennschulss (a nod to the novel “Gravity’s Rainbow”). “There’s not really a theme to the record, at least nothing official,” Dodds says. “But I think we did have it in mind that we were assembling a set of songs that would eventually be on a record together, as we were writing over the last year or so, and I think that had an influence on how it turned out.”

Dodds continues, “We’ve all had some pretty heavy events happen in our lives during the period of time in which a lot of the songs on the record were written. Some of them really good, but a lot of them really bad, and I feel like that’s maybe had an influence on the tone of a few of these songs — but I’m not sure I could exactly say what’s going on.”

Regarding their constituent interests, Dodds explains, “What I think we do have in common as an influence is a love for absurd situations, real or invented.” It’s this consideration for the unusual that The Teeth thrive in, which is as apparent on their latest release as it is in their live show.

Learn more about this at facebook.com/noisepollutionrecords.