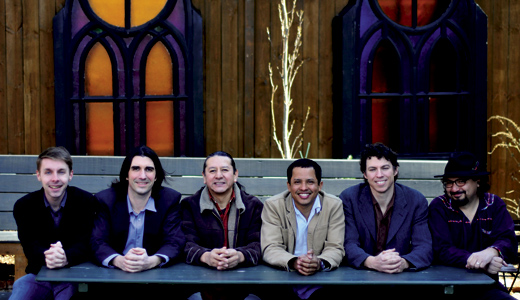 Mountains are the common link between the six members of Appalatin, who each took a different path to arrive in Louisville before the turn of the aughts.

Yani Vozos, Kentucky-born, picked up Spanish while living in Honduras on a Peace Corps trip. His lingual education wasn’t far off from Marlon Obando’s upbringing in Nicaragua. On this common ground, they wrote songs containing both Spanish and English lyrics.

Fernando Moya was already engrossed in performance with the traditional Andean group Andes Manta before extending his skills on wooden flutes and charango in Appalatin.

Steve Sizemore perhaps described it best when he said, “It just entered my soul,” about his experience living in South America from ’99-01. Now he bangs out on the bongos, conga and cajón drums, which are a heavy hip-shaking enticer of their African percussion selection.

Louis de Leon is the one you hear wailing on harmonica, something he picked up living in Guatemala. He also plays additional percussion, which he pulls out of a sticker-plastered suitcase filled with African instruments.

They all crossed paths in 2009, individually led by a connection with Latin culture and their destination of Louisville. Sharing a love for the rich Afro-Cuban allure of Buena Vista Social Club, the band merged their colorful backgrounds into a spread of Andean-inspired blues, using indigenous flutes as counterparts to harmonica and acoustic folk flairs. They are a fusion band of both language and style, proving that, when it comes to the roots, Latin America is a doppelganger.

“I definitely see parallels between roots music and the kind of Latin music we play,” says bassist Luke McIntosh, who has been with Appalatin for the past year. “It’s really not quite as strange a fusion as people think.”

Appalatin sealed this sound in their definitive, self-titled debut from 2010. It opens with “Canta Mi Gente,” set over a classic Cuban “son” style of music, reflecting their original connection to that historic music club from Havana. The title means “sing my people,” and since the beginning, this is what Appalatin set out to do: connect others through music. That’s why they write songs like “Spread the Love Around” and lyrics that tell us to “make sweet, sweet love,” because love is the answer to every problem of the sort.

This Friday marks the release of their second album, Waterside, joined by local songbird Andrea Davidson (who performs guest vocals on the single “Down by the Waterside” and throughout the record). The event launches Appalatin’s second effort in the local realm, and soon beyond if touring ensues as planned.

“It’s all poco a poco,” says Vozos, who holds down guitar and vocals with Obando, “little by little.”

It is apparent the Kentucky environment was the creative muse for Waterside, which features more foot-stompers than their debut. Take the “Danville Stomp” for a ride and try not to lose step in the sweep of the mandolin and harmonica. To a region that has shown continuous support, Appalatin honors it with “Kentucky Soul,” a ballad that earns the tag Latin-Americana.

Together, these men forged a space in modern music where there was a solid link from Appalachia to the Andes Mountains. It was only a matter of time until the rest of Louisville picked up on it.

Appalatin played their first gig at the Jazz Factory, and through the support of Heine Bros. Coffee co-founder Mike Mays, performed regularly at different Bros. in Louisville.

“We owe a lot to Mike Mays, because he gave us that venue to basically experiment,” says Vozos.

On May 19, Appalatin played their largest gig to date — and possibly to their biggest crowd — opening for the Dalai Lama at the KFC Yum! Center. In fact, they played twice.

“The vibe was pretty special,” says Vozos, recalling the sense of world peace.

Any member of Appalatin will tell you that the ways we can relate to one another are valuable. For them, it is through music; through the music of Appalatin, we can also form new bonds. It takes just a little bit of love.