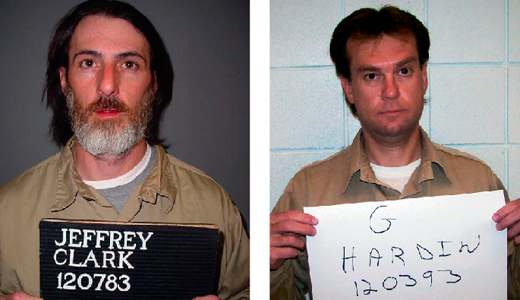 After years of attempting to prove they are innocent, Garr Keith Hardin and Jeffrey Dewayne Clark — convicted and sentenced to life in prison for the 1992 murder of Louisvillian Rhonda Sue Warford — achieved a major victory in their cause from a recent unanimous decision of the Kentucky Supreme Court.

Last year, the state Supreme Court reviewed their motion to allow DNA testing of evidence from the crime scene — not available at the time of their trial in 1995 — which was previously rejected by the Meade County Circuit Court. Attorneys for Hardin and Clark claim hairs from the victim’s hand could match another person linked to the crime and exonerate them.

In an April court opinion, Justice Bill Cunningham concluded the lower court had abused its discretion in denying the motion, adding a scathing indictment of the previous Meade County commonwealth’s attorney and Attorney General Jack Conway, who both fought to exclude the evidence from new testing.

“We are mystified, if not amazed, that the Commonwealth has such little interest in the possibility that DNA testing might lead to the prosecution of a guilty person heretofore uncharged and now at large upon the Commonwealth,” wrote Cunningham.

“We proclaim that evidence admitted into criminal trials in this state belongs to the Commonwealth of Kentucky. It does not belong to the Commonwealth’s Attorney. The latter is charged with the duty to preserve and protect the integrity of the evidence, not to hoard it.”

The Hardin and Clark case is just one in a growing movement over the right to post-conviction DNA testing, which has freed 303 convicted prisoners in America and several in Kentucky over the past two decades.

The attorney general has another week to decide whether to file a petition asking the court to reconsider its opinion. Although spokeswoman Allison Gardner Martin tells LEO a decision has not yet been made, she said via a written statement, “The Office of the Attorney General respects the Court’s decision. At the time this case was briefed and argued, Kentucky law only considered DNA testing in capital cases. Since this was not a capital case, our attorneys did not believe that this statute applied and agreed with the trial judge that the defendants had not met the burden of proof required by the statute. The statute has since changed to allow for DNA testing in non-capital cases.”

A new law passed by Kentucky’s General Assembly this year will expand such rights beyond just capital death penalty cases to other major felonies, as Kentucky’s laws were one of the two most restrictive in the country, along with Alabama.

The new law — passed nearly unanimously in both chambers — goes into effect this June, giving hope to many incarcerated Kentuckians, several of whom are currently battling reluctant commonwealth’s attorneys and county courts that refuse to subject evidence to further testing.

The 1995 trial for Hardin and Clark was sensational, with the prosecution arguing that their motive in the stabbing death of Rhonda Sue Warford in a rural field was satanic ritual sacrifice. While both admitted to dabbling in Satanism — in addition to making false statements to authorities and other incriminating statements — the Kentucky Supreme Court would later describe the evidence presented in the case as “highly circumstantial.”

While three hairs found in the hand of Warford did not match either of the defendants, one hair on her sweatpants was deemed similar to Hardin’s, and the victim’s fingerprint was found inside Clark’s car. However, Hardin was dating Warford at the time, which could have explained the hair’s presence, and the victim was known to be a passenger in Clark’s car, with the prosecution’s own witness admitting it could have been a very old fingerprint. Tire marks at the crime scene did not match either defendant’s car.

Additionally, both men had alibis for the night of the crime, testimony was given suggesting another person linked to Warford confessed to the murder, and a prosecution expert witness said the murder did not appear to be a satanic ritual sacrifice.

During the trial, a witnesses for the prosecution claimed Clark admitted to the murder in jail; following the conviction, however, a letter surfaced revealing that same witness had attempted to solicit another inmate to fabricate testimony that Clark confessed, hoping to receive shock probation for himself.

Smith tells LEO that the new law will make a world of difference for such prisoners seeking post-conviction DNA testing. Whereas some commonwealth’s attorney offices — particularly Jefferson County’s — have consented to gathering and testing evidence, many smaller county offices have stymied such efforts, citing Kentucky law.

“Having it in a statute that we can point to means that there’s no interpreting anything,” Smith says. “It hasn’t been fair. If you’re in one county you had access to this testing, and if you don’t, you have to sit there.”

While Smith says the actions of Jefferson County commonwealth’s attorneys have resulted in several exonerations — as well as time and money saved from legal challenges — some prosecutors have been especially stubborn, refusing to admit they may have fought to wrongly convict an innocent person.

“Some folks, when you approach them, are open to the idea that they may have made a mistake and that they’re only human,” Smith says. “And other folks don’t think of themselves so much as human.”

Former Meade County Commonwealth’s Attorney Kenton Smith — who prosecuted the original case and served until 2008 — tells LEO that while he has the greatest respect for the Supreme Court, he stands by his actions and hopes Hardin and Clark remain incarcerated.

“It was imperative that these two people stay in jail,” he says. “I was and I am absolutely, completely and totally convinced of their guilt.

“Mr. Hardin and Mr. Clark were the only people in my 22 years of prosecuting that simply killed for the enjoyment of killing. So I just felt and feel like they’re obviously murderers and they’re right where they need to be.”

But the former prosecutor concedes that the evidence was circumstantial, adding, “I possibly had tunnel vision on keeping two very dangerous people incarcerated.”

And if the hairs tested do in fact link another person to the murder, he says that will just confirm his belief that there was a third person involved in the crime who committed it alongside Hardin and Clark. However, the Supreme Court opinion noted that the commonwealth’s theory at the time was that the defendants acted alone, presenting no evidence of a third party’s involvement.

While the new post-conviction DNA testing law will soon go into effect in Kentucky, Linda Smith of the Kentucky Innocence Project is fighting commonwealth’s attorneys in other cases around the state to release such evidence for testing.

Smith is representing William Virgil, who was convicted of murder in Campbell County in 1987 and sentenced to 70 years. Commonwealth’s Attorney Michelle Snodgrass has sought for years to block Virgil’s efforts to conduct DNA testing on semen in the case that could exonerate him, though a Campbell County Circuit Court judge recently agreed to schedule arguments on a new motion by Smith.

The Innocence Project attorney also represents Juan Gonzalez, who took a plea deal on a 1994 rape charge, despite later DNA testing showing that semen from the victim was not his. Gonzalez, who was not a legal immigrant at the time, was subsequently deported, and after re-entering America is now serving a federal sentence for illegal re-entrance with a felony — one that DNA evidence shows he did not commit.

But Henderson County officials aren’t cooperating in exonerating Gonzalez from his previous felony, Smith says, “So he’s essentially being punished twice for a rape he never committed.”

Despite these setbacks, Smith hopes to continue receiving applications from prisoners seeking assistance from the Kentucky Innocence Project, adding that the new statute eliminates procedural obstructions that she and her clients have had to fight in recent years.

“Most of the time I think our system works,” Smith says. “But when it doesn’t, those folks do write us, and we don’t get too many who are just trying to play a game, because you know that the evidence is going to speak volumes.”