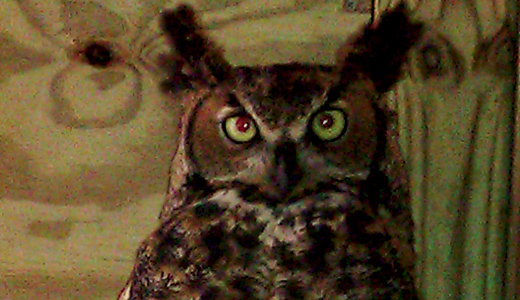 Ginger casts a sideways stare at the strange people gathered around her cage. A red-tailed hawk, Ginger has a white band of feathers on her neck that distinguishes her.

She also has a compromised wing that doesn’t snug to her body properly and prevents her from flying, the result of a shotgun wound she suffered in the early 1990s. A mammal rehab group had taken Ginger in but couldn’t figure out what was wrong with her. When the raptor didn’t improve, she was turned over to Raptor Rehabilitation of Kentucky, located here in Louisville on Southern Avenue.

“She still had lead shot in her body,” says Eileen Wicker, director of the Louisville-based rescue and rehab operation. “She had 17 pieces in her. We could literally pick the shot out of her with our fingernails.”

Today, despite a slightly malformed wing, Ginger is not only a regal creature, but a top-notch foster mother to young hawks who end up at the facility.

“Isn’t Ginger by far the most superior hawk you’ve ever seen?” says volunteer Camille Allman, who was instrumental in nursing the hawk back to health two decades ago.

Wicker took over running Raptor Rehabilitation 25 years ago, along with her husband, John. They and their volunteer staff care for an array of birds of prey, from owls to hawks to vultures, and utilize those birds in community and education outreach programs.

They even have a bald eagle named Aquila in permanent residence, as well as a rather outspoken great horned owl named Luna. It’s a wonder Luna’s neighbor Hagatha, another owl who was raised in captivity and can’t be released into the wild because she has been “humanized,” gets any sleep because of all the noise Luna makes.

“She is just a crazy bird,” Wicker says while taking two visitors on a tour. “She hoots like that all the time.”

In recent years, Wicker, 65, has suffered various health problems, making the job increasingly difficult. As a result, she has promised John, 68, that in five years, she will give up this mission on which she’s built most of her adult life.

“This has been his life as well as mine,” Wicker says. “Thank goodness he’s sympathetic and loves these birds.”

In addition to uncertainty about what will happen in five years, the organization is facing financial troubles. Raptor Rehab, as it is often called, runs on a $95,000 annual budget that comes primarily from donations. The down economy in recent years has resulted in decreased donations, as is the case with many nonprofits. Another financial burden has been increasing costs: Birds of prey like to eat rodents — lots of rodents — and mice that a year ago cost 37 cents each now cost nearly a dollar, thanks to a shortage caused by a bacterial outbreak.

Last summer the shortage grew so bad that Raptor Rehab had to stop taking in birds for six weeks. And when they can’t take in an injured bird, there’s a good chance the bird will be euthanized, because Raptor Rehab is the largest such facility in Kentucky.

Metro Councilman Kevin Kramer, R-11, has been a supporter of Raptor Rehab, helping to secure land for a potential expansion and working to acquire a grant that ultimately fell through.

“Eileen and John are doing tremendous work with those birds,” Kramer says. As an example, he tells the story of an injured goose on Interstate 71 that was causing traffic delays, in large part because its flock would not leave its side. When other rescue groups failed to respond, the Wickers came to pick up the fallen bird and to shoo the rest away.

“To have that organization right in my backyard,” Kramer says, “you have to be proud of that.”

But can it continue? Despite financial hardships, there are still supporters out there. Eileen says they have a group of people who donate regularly, in addition to anonymous contributions. One anonymous donor even willed $10,000 to Raptor Rehab.

Then there’s young supporters, like 12-year-old Hannah Payne, who gets $40 a month allowance, half of which she donates to Raptor Rehab.

“The public supports us,” Wicker says. “Every year we just seem to make it. I think that’s probably because I’m tight.”

It’s remarkable to watch Wicker move through the facility, interacting with her cast of volunteers as though they are family. John, ever present, is something of a silent partner, always there to do the work but remaining mostly in the shadow of his wife.

“We have the best volunteers,” Eileen is quick to say.

Recently, two young barn owls were found flopping around in someone’s backyard. Raptor Rehab came to the rescue, and on a Sunday afternoon volunteers were tending to the two raptors huddled in a pet carrier. One of the owls looked terrified and stayed buried in the back corner, while the other hissed and squawked as if prepared to fight to the death to protect its partner. Perhaps that kind of resolve is what fuels Wicker.

“I would do anything for these birds,” she says. But even she acknowledges that as her time at Raptor Rehab grows shorter, the facility’s future grows murkier. If forced to close in five years, all the resident birds will have to be placed in other facilities.

Well, except for Eo, a turkey vulture who just last week celebrated his 21st birthday with a big bash at the facility. He came to Raptor Rehab as a chick and is a favorite among volunteers. “He might have to stay in my bedroom,” Wicker says with a smile.

When speaking about who might take her place in 2018, she says, “This has been a labor of love. There’s no way you could pay somebody to do what I do.”

Councilman Kramer agrees: “I would love to see them get a strong board of directors that could look 15 or 20 years down the road to ensure the great work they are doing now continues. It’s really bigger than John and Eileen already, but because of their passion, commitment and energy, they are performing a task that is well beyond what two people should perform.”