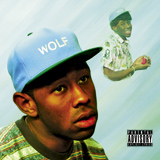 That Wolf leads with “Fuck You” as the introductory vocal is a fair indication of what to expect. Known for controversy, Tyler and his Odd Future crew are ever apt to offend, casually throwing out race, gender and sexually-oriented epithets with a cavalier flair, as if to punctuate how little they care at who they might insult. This predilection for caustic and divisive language is touched on in tracks like “Domo23,” which simultaneously dismisses the media while not so humbly bragging about Tyler’s financial and sexual successes. “Answer” and the wonderful, Frank Ocean-backed “Slater” attempt to explain some of Tyler’s obvious anger issues by attending to his absentee father, who by extrapolation is presented as the impetus for his negativity. The high point is Tyler’s incredible production and wonderful flow, undercut only by his unmitigated desire to needlessly antagonize.