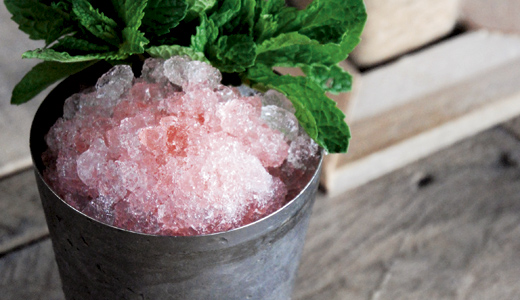 Whether you live here or you’re only in town for the ponies, chances are good you’d like to have a few Derbytime drinks. Drinks you can sip respectably in broad daylight. Drinks steeped in nostalgia and tradition. Drinks that make you slap your knee and proclaim, “By God, I love Kentucky!” Well, never you worry your humidity-stricken head. Throw on your haberdasher’s finest and head on down to these local haunts.

A light and lovely libation …

In the 1930s while Mussolini was wasting his time with warmongering, fellow Italian Giusseppi Cipriani was doing something far more beneficial for the world — inventing the Bellini. By 1945, Mussolini had been captured, oddly enough by a man named Bellini, and executed. Giusseppi lived out the rest of his years rubbing elbows with celebrities and various royal family members at the bar he owned. Proving, in my opinion, that time is much better spent enjoying pureed peaches and Prosecco than engaging in full-on military combat.

Traditionally, a Bellini consists only of peach puree and Prosecco (an Italian sparkling wine), but the ever-inventive staff of Proof on Main stepped it up a notch. Less sweet, equally elegant and only slightly more intoxicating, it’s a feminine way to drink bourbon and a masculine way to drink a Bellini.

They make this lovely little delight by pouring 1 ounce of bourbon into a flute, adding 1 ounce of house-made peach and vanilla syrup, 2 dashes of Angostura Bitters, half an ounce of orange juice and topping with champagne.

Close only counts in horseshoes and hand grenades. I know it’s tradition to have a pre-mixed mint julep or four at Churchill Downs the first Saturday in May, but it would be in your best interest to enjoy the real deal. The mint julep of tradition. The mint julep of America. The mint julep that moved one Kentucky writer to declare, “The nectar of the gods is tame beside it.”

Most likely invented in the late 1700s, the julep is believed to have been used as a medicinal morning drink, much like coffee, by Southern farmers. I believe it went something like this: sit up, rub your eyes, sip a refreshing julep, and bam! Suddenly, plowing the fields all day doesn’t seem half bad. From its humble beginnings on the farm, the julep climbed her way to the top and became the most popular American-born cocktail for over a century until the sexier, easier-to-get martini sauntered in and took center stage during the Prohibition era.

Technically, there are four ingredients in a mint julep, but if you’ve set off to make yourself a drink, you probably already planned on the ice and liquor bit, so it’s really more of a two-ingredient production. I’ve lived in Kentucky long enough to know you’re not going to want to hear this, but a julep does not have to be made with bourbon. Just about any spirit you have on hand will do. Below is Louisville bartending legend Jared Schubert’s detailed instructions on making this legend.

Place two mint sprigs into a julep cup. Add 1 tablespoon of sugar, 2.5 tablespoons of water and 3 ounces of bourbon. Press the mint very lightly with a wooden muddler to release the flavor. Fill glass with crushed ice. Garnish three to four mint sprigs, insert a straw and enjoy.

Against the Grain’s Bloody Mary

According to most, the bloody mary was invented in 1921 by French bartender Ferdinand Petiot, and it simply consisted of equal parts vodka and tomato juice. A relatively mundane start for the lovely libation that satiates so many of us slightly hungover Sunday brunch-goers. Nowadays, bloody marys tend to be equal parts food and alcohol and can come with any dizzying combination of meats, cheeses, pickled provisions, fried whatnots, fruits and vegetables. Hell, I wouldn’t even judge you if you put an egg on it, ate it with a fork, and called it huevos rancheros.

If you love bloody marys as much as I do, it would behoove you to get your behind down to Against the Grain and try their version. Concocted by local bartender extraordinaire Joe Riggs, it all starts by macerating vodka for about a week with smoked horseradish, smoked garlic, onions, peppers lemons and dill. The mix is also made in house and includes their signature barbecue sauce, Sriracha, jalapeno juice and smoked black peppercorns. The whole kit and caboodle is topped with a beautiful tangle of celery curls.