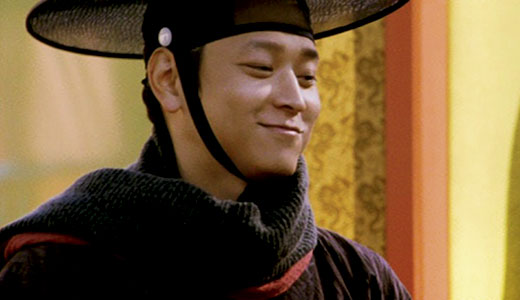 THE SORCERER AND THE WHITE SNAKE

Jet Li claims he was tricked into doing this movie, but he should be proud of the result. According to the ancient Chinese legend of Madam White Snake, a mystical 1,000-year-old serpent-demon hides in the form of a beautiful woman (Shengyi Huang), targeting the soul of a humble herbalist (Raymond Lam). Li stars as the sorcerer-monk who discovers her true identity, then battles to save both souls: the man and the demon’s. Some have dumped on this, preferring an earlier Shaw Brothers version, but we thought it was some of Li’s best physical work.

A crazy Korean martial-arts time-travel tale about dark lords, goblin armies and Woochi, the great warrior-spirit here to save us all … maybe. Dong-won Kang (“Duelist”) stars as Jeon Woo-chi, the lazy, skirt-chasing, would-be monk who finds himself unexpectedly in our modern world, completely unprepared for the battle that awaits him. Fans of Korean fantasy flicks know that no one tops these guys when it comes to crazy effects and over-the-top action. To say more would spoil the fun. A hoot and a half — don’t miss it.

If you are as tired of sports flicks as we are, here’s the cure from director Yudai Yamaguchi, the man who brought us the perfect zombie-sports splatterfest, “Battlefield Baseball.” Tak Sakaguchi returns, this time finding himself deep in the bowels of Pterodactyl Juvenile Reformatory after accidentally killing his father with a deadly “fireball pitch.” The place is run by a pair of Nazi psycho-bitches who force him to play ball in their national prison tournament, or they’ll give his cellmate a lethal cavity search. Hilariously offensive and over the top at every turn; a shlock masterpiece.

James Gandolfini and Famke Janssen take time off from blockbusters to make this dark indie drama something special. He owns a rundown amusement park on the Jersey shore. She’s a childhood friend and former lover. They are brought together again and must relive an unthinkable crime when a stranger suddenly appears with Gandolfini’s sister’s ashes, claiming to be her husband.

ERROLL GARNER: NO ONE CAN HEAR YOU READ

If you don’t recognize the name “Erroll Garner” then we know two things about you: 1) You know nothing about the piano, and 2) you probably listen to music on your phone. For the rest of us, Garner spent 40 years exploring the piano, an instrument stifled by centuries of German classical traditions, turning it into an expressive tool for the masses. His freewheeling jazz found expression on the keyboard in ways that no other performer had ever dreamed of, profoundly enriching our generation’s music and inspiring countless performers around the world. This doc explores his living legacy with great live performances.

A surprisingly original indie horror/thriller from South Africa about four ill people who volunteer for a mysterious corporate medical experiment in a remote testing facility. They have no idea what its goals are, no supplies, and no way out. Then something goes wrong, and the medicos send in an army to get rid of the evidence … And that’s when this thing takes off in very unexpected ways. Not the best movie ever made, but different and interesting. Co-stars statuesque blonde babe Ingeborg Riedmaier.

This classic sitcom was in real danger of jumping the shark as it entered its sixth season. They had just lost Tracy Pollan, Michael J. Fox’s love interest, and needed a ratings recharge if the show was to remain viable. That’s when they hired nubile Courteney Cox as Fox’s rebound-babe, invigorating not only the show but her career, she having just ended the too-brief 16-episode life of “Misfits of Science” (a vastly underrated show in our minds). Six years later, she would make history on “Friends.” Next-to-last season of one of the best-written, most entertaining shows around.

This thing blew our freakin’ minds! A doc on African artist El Anatsui, a man who turns bottle tops — i.e., garbage — into the most beautiful tapestries and lavish hangings imaginable. But beneath the sheer physical prowess necessary to perform this miracle, there lies the mysterious artist himself: an enigma whose art reveals remnants of both the private horror of his childhood and his ethereal outlook on life. Don’t miss it.

GOODNIGHT FOR JUSTICE: QUEEN OF HEARTS

The latest in a Hallmark Channel franchise starring Luke Perry as Old West Circuit Judge John Goodnight. Yes, several downtime thesps show up for a paycheck, but these things are still surprisingly entertaining. In this one, Ricky Schroder, Katharine Isabelle (“Ginger Snaps”) and Ryan Robbins (“Apollo 18”) have fun with a stagecoach robbery, a mysterious woman who may not be whom she appears to be, and a big reveal aboard a riverboat. Fun.

Comic Bill Murray proves himself timeless as President Franklin D. Roosevelt, who, with wife Olivia Williams, are about to host the king and queen of England — desperate to get U.S. help in quelling Hitler’s aggression — in this historical dramedy. But the real fun here is Daisy (Laura Linney), FDR’s distant cousin and “neighbor” — OK, let’s just say it: He’s hittin’ that — who helps the president keep his sense of whimsy as the world outside comes crashing into his own little sanctuary. A perfect gift for the ’rents, should you ever need it.

This over-titled doc by director O.H. Krill, famous for his breathless explorations of flying saucers, hauntings, Kentucky wildmen and other Fortean topics, looks at how a super-rich “ruling elite” control the world by manipulating the media and infiltrating all levels of power. His docs are never “good,” but they make great party platters! We suggest taking a shot each time he you hear “Bilderburg.” Enjoy.

We hate found-footage movies, which is one reason we enjoyed this spoof of them from Kevin and John Farley (a pair filmmakers you should get to know better). Kevin’s life has suddenly gotten spooky, so he sets up vidcams around his home to see what goes on while he and his girlfriend (smokin’ hot Maxim babe Carly Craig) sleep. The next scene is priceless as they find their nighttime sanctuary knee-deep in colorful clowns, unemployed Hollywood actors, bored ghosts and ganja-sucking demons! So they call on a TV paranormal investigator (John) to investigate. We liked it.

When it first came to theaters, no one would admit they liked this corny little Tolkenesque fantasy, but by 2001, it was one of the most-requested video titles in the nation. Starring Warwick Davis, Val Kilmer, Jean Marsh and Billy Barty, writers/directors Ron Howard and George Lucas combined their talents to create a timeless tale of evil queens, swashbucklers and plucky real-life dwarves. But the most historic thing about this picture is that it was the first-ever use of the now-common SFX technique called “morphing.” Lucas invented it, used it for only one scene, then went on with his life. Now available on Blu-ray.

A Sundance-winning biodoc of Gene Robinson, the world’s first openly gay bishop (he presided over Barack Obama’s Inauguration), and a look at how society’s changing attitudes on homosexuality are affecting Christendom. He puts it more simply: “Does God’s love have limits?”

A look at the Israel Philharmonic Orchestra, a group founded by Jewish musicians from across Europe who found themselves unemployable as Adolf Hitler rose to power.

A great little martial arts fantasy that starts off as a police procedural, then takes a left turn into legend. Based on the novel “The Four Detective Guards,” a quartet of Kung Fu masters investigates a counterfeiting ring, only to discover an army of the undead! Wildly imaginative, with terrific Kung Fu action and an attractive cast; may be hard to find but worth the search.

Red-headed Laura Prepon (“That 70’s Show”) is having a bad week. She’s turning 30, just left her job, has a really creepy roommate, discovered her boyfriend is cheating, all her friends suck, and now her best guy-pal (Matt Bush) wants to throw her the party to end all parties — which little sister Dreama Walker intends to hijack! — and it all takes place in her kitchen. A surprising ensemble experimental-dramedy with a wonderfully attractive cast. Worth your time.

Ray Winstone shines in this feature-length police drama based on a wildly popular British TV show from the 1970s. He plays the ultimate hard-boiled detective, a blunt instrument who solves crimes and puts away (or pits down) criminals, regardless of the costs. He’s also having an affair with the hot wife (Hayley Atwell) of a police internal affairs officer! Great stuff.