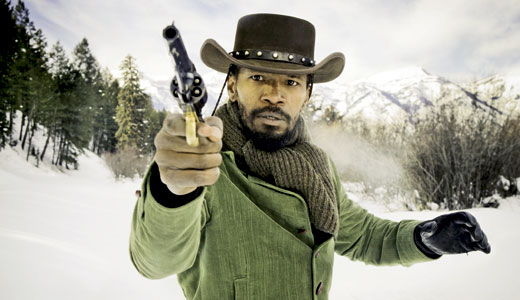 Jamie Foxx outshines an impressive cast (Christoph Waltz, Leonardo DiCaprio, Kerry Washington and Samuel L. Jackson) as the brutal, untamed slave used as a tool of revenge by bounty hunter Waltz — while Foxx hunts for his own enslaved wife (Washington). This film is a flawlessly written and brilliantly directed effort by Quentin Tarantino, but it’s not for everyone: It is a violent ode to a violent genre — relentless, savage and demeaning. That being said, it is also the perfect grindhouse experience, inspired by Sergio Corbucci’s 1966 genre-busting spaghetti western “Django.” (Watch for that film’s star, Franco Nero, in a cameo as Amerigo Vessepi.)

One of our absolute favorite flicks — now on a Criterion Edition Blu-ray! Emilio Estevez is a dead-end punk who lives in a world of violence and drugs until he meets Repo Man (Harry Dean Stanton) and learns the Zen of auto repossession. Meanwhile, a mysterious doctor drives through the night with (dun dun DUNNN) something in his trunk, while Tracey Walter ruminates on missing persons and time travel. And it all comes together in a slam-bang existential ending that’s part “Naked Lunch” and part “Electric Kool-Aid Acid Test.” A must-own!

AT THE GATE OF THE GHOST

Aka “The Outrage,” this is a Thai take on Kurasawa’s classic he-said/she-said drama “Rashomon.” After the trial of a brutal murderer, a young monk goes to discuss what he saw with his father. On the way he and a poor man ride out a storm in a burial tunnel where an old beggar guides them through the trial from each participant’s identical — yet completely different — point of view. The ending here is uniquely framed in a Buddhist perspective. Thought-provoking.

This enigmatic sort-of martial arts movie is a Chinese take on Viggo Mortensen’s “A History of Violence.” Donnie Yen plays a quiet man in a small village who recognizes a pair of brutal gangsters as they come into town. When they attack a shopkeeper, he jumps into action, displaying incredible feats of skill, but this attracts the attention of a detective who accuses him of being a notorious former gangster. This, in turn, draws more criminal elements into town to see if he is, in fact, their missing turncoat. Highly recommended.

A deep, complex tale from China based on real events. Over a century ago, in the heart of their “Wall Street” period, a young man, one of four brothers, is in line to inherit his father’s vast, crumbling banking empire. But he wants nothing to do with it because his father has married the young man’s one true love. The story also explores the effect the plague of Christianity had as it first swept over the more urban areas of the country. A historical soaper of the first order.

Dominic Purcell makes a terrific psychotic killer in this low-rent indie thriller. He’s quietly tucked away in a padded cell until a pretty co-ed (Christine Evangelista, nummy nummy) comes by to study him. That night — in the midst of a convenient hurricane! — he escapes in a bloody rampage, looking for the girl. OK, it’s a total piece of crap, but it’s an entertaining piece of crap! Great bad-movie fun.

Marvelites will recognize this as the excellent animated tales of billionaire Tony Stark. A young nut-job named Ezekiel Stane creates a “techno-organic” armor that seems even more incredible than Iron Man’s. But when Stane turns terrorist, Iron Man is accused of his crimes, putting Stark on the run from both S.H.I.E.L.D. and a new technology that threatens all life on Earth. Good stuff. ’Nuff said?

NOT SUITABLE FOR CHILDREN

An indie Aussie starring-vehicle for heartthrob Ryan Kwanten (Jason Stackhouse of “True Blood”). He plays a hedonistic young man who discovers that he will be infertile in a month, so he sets about trying to impregnate every woman he can find. But despite its stroke-flick plot, this is a very smart, funny, caring movie about finding what you want out of life. We liked it.

ONE DAY ON EARTH

A truly unique and immersive cinematic experiment, this is the first film ever made in every country on Earth on the same day: October 10, 2010. The result is a seamless look at the interconnectedness of all things on our fragile globe, the loss of even the least of which could make your life unbearable — if not impossible. From birth to death and beyond, we see the oneness of all things. Warning: This movie can be a sensory overload if you are unprepared. Don’t resist; just open your mind to the experience and enjoy.

An action-packed documentary on the rift between an ever-growing number of mountain bikers whose trails are destroying sensitive woodlands, home to extinction-threatened creatures, and the understaffed, underfunded federal land managers trying to protect them. While the topic is contentious, the filmmakers show that there is a simple solution, but it requires that capacity Americans seem to have lost of late: cooperation. A beautiful ride.

This short-lived romcom series from GB didn’t go over all that well, but we thought it was charming, sweet, fun and funny. A pair of brothers, one committed to the family/small-town candy business and the other a shallow big-time developer, clash when they must decide the business’ fate. But that is just a prelude to the clash that occurs when the rich brother sets his sights on the poor one’s fiancee. Miranda Raison (“Vexed,” “My Week With Marilyn”) is simply wonderful as the betrothed in question, with Tom Ellis (“Buffalo Soldiers”) and Shaun Dooley (“Misfits”) as the brothers. Recommended.

Lucas Till (“X-Men: First Class”) is BMOC at his high school, running all the plays on the field as well as within a gaggle of honeys and homeys. But the movie’s not about him, it’s about his entourage, one of which may be a psycho. Is it his childhood platonic friend, Sarah Bolger (Princess Aurora from “Once Upon a Time”)? Or the shy girl, Bess (Crystal Reed, TV’s “Teen Wolf”)? A better-than-average PG-13 teen outing that reminded us of “Swimfan.”

We were about to swear off zombie movies forever when we received this seemingly run-of-the-mill rotter. Wow, what a difference talent makes! When a military bio-weapons plant blows up (very well done, btw), it turns all the locals into the walking dead, except for a select few who seem to be immune. One of them (Jay Hayden, “A Warrior’s Heart”) must gather these few together and prepare for a rescue. But could the rescue be deadlier than the zombies?

Originally known as “Through The Eye,” this gritty war-on-drugs actioner stars Tom Sizemore (largely in cameo), Robert Thorne and Bertie Higgins with David Castro as the drug lord and little Bianca Malinowski as his squeeze. Thorne, a disgraced DEA agent, faces certain death at the hands of Sizemore’s weed-smuggling cartel as he passes through The Eye, a Yucatan channel between Mexico and Cuba where a ruthless cartel boss waits.