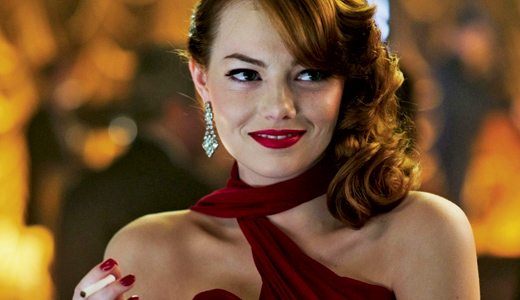 Sean Penn takes a rare turn at chewing the scenery as infamous L.A. mobster Mickey Cohen in this star-heavy real-life crime drama. Josh Brolin and Ryan Gosling are the good guys, with Emma Stone as Penn’s sultry hooker/girlfriend, and Robert Patrick in top form in a small part as a hilariously droll police officer. Surprisingly lighthearted in some ways (the cops spend much of their time cracking silly jokes), yet rife with bloody machine-gun shootouts. And, yes, the faux-noir stylings are too obviously similar to “The Untouchables” to go unmentioned. Not a great movie but entertaining if you like machine-gun mayhem.

Naomi Watts, Ewan McGregor and sons travel to Thailand for Christmas, only to wake up the next morning to the unimaginable: an earthquake and tidal wave that crushes and drowns tens of thousands of people in one of the worst natural disasters in recorded history. But this movie isn’t really about the catastrophe, it’s about the real-life courage and compassion of those who survived — or more often, died helping others survive. A breathtakingly intimate real-life drama that quite literally puts the viewer in the middle of a nightmare. An edge-of-your-seat thriller brought to life with state-of-the-art special effects, brilliant writing and a great cast. Highly recommended.

Marlon Wayans and Essence Atkins are the requisite new owners of a haunted house in this goofy spoof of “Paranormal Activity” found-footage movies. When Atkins becomes possessed, the transformation is captured on Wayan’s sex-cam — leading him to spend the rest of the movie frantically trying to get laid! Tasteless, raunchy and damn funny at times with Cedric the Entertainer as the priest and Nick Swardson as “Chip,” the psychic.

A surprisingly good look at UFOlogy’s first major abduction story. The Hills, a biracial couple traveling by car in the late ’50s, experience “missing time,” leading to odd behaviors and nightmares. Their experience is “recovered” by a therapist using “hypnotic regression,” leading to the hit book “The Interrupted Journey” (1961) and a TV movie. This doc introduces us to Betty’s niece, Kathleen Marden, who provides an intimate look at how the two were changed by the experience, insights into the now-disgraced therapist, and Betty’s transformation into a UFO investigator.

A rude, crude cartoon retelling of some of C&C’s best tales from back in the day, everything from “Dave’s not here, man!” to “Oh, wow! It’s rainin’ cats and dogs out here, man!” (while they piss on a car trunk full of guys they’ve sneaked into a drive-in). And it’s all told from the point of view of “Buster,” a body louse who spends his days getting high on the pair’s weed-infused blood. Two hours of tasteless, obscene, filthy, unredeemable fun. We LOVED IT!

A high-concept drama that mixes science, sexuality, horror, social commentary and exotic locales. Michael Angels plays the titular human clone, left for dead on a Greek beach. He’s eventually rescued by a man (Keith Roenke) trapped in a loveless relationship, who tries to selfishly mold his find into the perfect “companion” (often on a leash!), with disastrous results. The ending will hit you like a slap in the face; unlike anything we’ve seen before.

Two episodes of a mesmerizing, long-running German-made police procedural filmed in Venice, Italy. Crime novelist Leon is a masterful writer, using the canals, culture and Neapolitan delights of Venice in creative ways to feed the investigations of Brunetti, a razor-sharp detective, frustrated by the system and with zero regard for the rampant incompetence he sees around him. Episode 17, in particular, is a perfect introduction as he looks for the killer of a 10-year-old girl from a marginalized community that fears the police — and with good reason! Some of the most engrossing TV you’ll ever see; highly addictive, highly recommended.

A biodoc on Father Greg Boyle, the white Jesuit priest of Homebody Industries, the nation’s largest and most successful gang-reduction program. His philosophy is simple: Find the gang-bangers a job where they can use their skills in more profitable and productive ways, and the gangs will no longer exist. An earthy bear of a man who uses love and commerce to find the amazingly tender side of once-hardened criminals, turning them into captains of industry and making a positive change in the world. Inspiring.

IT’S IN THE BLOOD

The immortal Lance Henriksen stars as an estranged father who takes his adult son into the woods for some much-needed bonding. That never goes well, does it? After he is badly hurt, the son must save the day. But standing in their way is a sadness born of great loss from a year earlier, and the father’s injury seems to cause a breakdown in reality. Are the dead watching them? Is it an unpaid debt that they seek? This is one of the absolute best no-budget spooky dramas we’ve ever seen. Both co-star Sean Elliot and filmmaker Scooter Downey should be on everyone’s radar. Check this out.

Local boy Gus Van Sant’s latest indie directorial effort with Matt Damon (natch) and Frances McDormand as corporate suits sent to buy up natural gas drilling rights around a rural town hard hit by economic decline. But locals Hal Holbrook, John Krasinski and Rosemarie DeWitt take exception to their plans and try to rally the residents against them. An extremely well-done modern-day drama, ripped from the headlines by some of the most talented people in the industry. Highly recommended.

Rich-guy Goran Visnjic (“The Girl with the Dragon Tattoo”) wakes up from a drug-and-alcohol-fueled bender in a jail cell, unable to remember anything about the night before. Don’t you hate it when that happens? Locked in a “deviant jail,” a brutal nightmare of murderous homosexuals, transvestites, child-rapists and sadistic drugged-out thugs led by Mousey and Ben (Kate Del Castillo and Jason Mewes), he must learn how to survive before he can seek freedom. Honestly? This is one truly wretched film, but perfect your next Bad Movie Party! Recommended.

There have been a lot of films and docs that consider the aftereffects of 1967’s Summer Of Love, but this is the original and still the best. It focuses on NYC’s burgeoning anti-war movement, led by such luminaries as Abbie Hoffman, folksinger Phil Ochs and anarchist Tom Osha Neumann, many of them seen here before becoming household names. Its final segment, showing the brutality of the Chicago police against peaceful Vietnam protestors at the Democratic National Convention, is still difficult to watch. Recommended.

You could argue that The Inhumans is a failed Marvel experiment; the usual “race of genetic aberrations” plotline, but one so over the top and filled with self-actualization that it has had trouble finding its audience. Case in point: Black Bolt, a leader from the Royal family who must never speak, for his voice is as powerful as an atomic blast! And unlike the “X-Men,” these characters chose to become mutants and now protect their island sanctuary and way of life from those who would destroy it, from outside or within. We thought it was terrific; check it out.

The latest in a string of recent “moron criminals accidentally rob The Mob” actioners. In this case, a trio of petty thugs hold up a late-night diner. A cop walks in. Guns are drawn. The place is surrounded. But the hostages seem more concerned about the cops than the robbers — they are all mobsters, armed to the teeth! A fun bit of gangster nonsense with Ray Liotta, Nikki Reed and Jessica Szohr (“Gossip Girl”).

Yeah, it’s another one of the SciFi Channel’s cheezy CGI monster mashups, livened with help from lovely Rae Dawn Chong (so amazing in “Quest For Fire”) and sultry Nazneen Contractor, who played Kayla Hassan in “24” and will appear in “Star Trek Into Darkness” later this year. Stars the familiar face of Sebastian Roché from “Fringe,” “Beverly Hills Chihuahua 3” and TV’s “General Hospital.” Good Sunday afternoon couch-fodder.

This Norwegian horror/fantasy is a hoot! A pair of dim-bulb crime-scene cleanup men discover Thale, a beautiful, naked, mute woman-child (Silje Reinåmo) hidden at one of their jobs. Oh, and she has a tail. So they take her home. Smart move, dudes. What happens next is straight out of a Nordic fairytale — which is never a good thing, but makes one helluva good film. Very recommended.