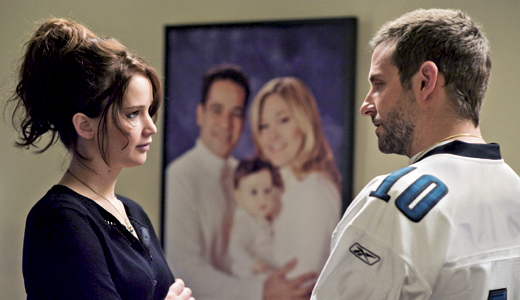 Local lass Jennifer Lawrence stumbled away with the Best Actress Oscar for her work in this lively drama; and rightly so, turning a good, if unremarkable indie potboiler into something quite amazing. Bradley Cooper stars as a man starting his life over, forced to move in with his football-obsessed parents (Robert De Niro and Jacki Weaver) after eight months in an institution for attacking his wife’s lover. That’s when he meets Tiffany (Lawrence), another damaged soul who agrees to help him in the misguided attempt to win back his wife — in return for his help with her own demons. The entire movie is a thrill ride of human emotion — and surprisingly uplifting — while the scenes between Lawrence and Cooper crackle and spark. A must-own.

Why this wasn’t more widely shown is beyond us, it’s one of the best dark comedies we’ve seen in years — and it has the Cast of the Gods! Tobey Maguire and Elizabeth Banks live the perfect suburban life until Lizzy’s waning sex drive sends Tobey into a porn-shame spiral. That’s when he decides to hump neighbor-babe Kerry Washington, hoping that her hubby (Ray Liotta!) doesn’t find out. He does, of course, and gives loverboy a pair of murderous choices. But his real problem? Raccoons are destroying his yard! Trust us, it makes a quirky kind of sense.

While it can’t have the dramatic impact of the Charleton Heston classic, this 3-plus-hour History Channel series has the advantage of being far more intimate and historically accurate. We particularly liked the inference that, because it was Passover, the Roman soldiers took Esther’s father down from the cross alive — implying that Jesus was also taken down alive. Stars Joseph “Vampire Diaries” Morgan and a slate of other familiar TV faces.

OK, right up front: This movie is terrible but entertaining as hell! Producer Mark Wahlberg stars as a mistreated force of nature out to take down the evil and powerful mayor (Russell Crowe, chewing scenery like a rabid beaver). Along the way we’re treated to Catherine Zeta-Jones in full-on sexy mode, Jeffrey Wright, Barry Pepper, Alona Tal from TV’s “Cult” and “Supernatural” — and a completely gratuitous nude scene by smokin’ hot Natalie Martinez, Detective Jamie Lovato from “CSI:NY”! Man, we have never had more fun groaning at the screen. You gotta check this out.

First-ever Blu-ray release of the perfect ’60s musical and the world’s cinematic introduction to Barbra Streisand. Set in the 1930s, Babs shines as Fanny Brice, a captivating, real-life singer/comedian who lived a professional life unfettered by society’s — and Judaism’s — limitations, though not without a price. The music is breathtaking from the opening “I’m the Greatest Star” through “People,” “Don’t Rain On My Parade” and “His Love Makes Me Beautiful.” Best of all, this new digital transfer has finally brought the soundtrack to the masses the way it was meant to be heard. Wonderful.

“Masterpiece Theatre” stalwart Ian Carmichael was everywhere on ’70s BBC TV, but this was his very best role, as Dorothy L. Sayers’ witty and avuncular detective, solving crimes and upsetting gentle 1920s British life, usually with his jolly pal Bunter (Glyn Houston) in tow. If you like earthy whodunits that put all the clues out in the open and dare you to solve them, there has simply never been a better series for you. Six wonderful discs; five three-hour stories plus almost 40 minutes of exceptional bonus goodies make this our favorite DVD release of 2013 to date. Don’t miss it.

Man, did we enjoy this! On the surface this is the tale of a young man who drops out of college to pursue his dream of being a ’60s rock god. But it goes so much deeper than that, exploring our collective dreams, our passions, our relationship with time, people and death, and, most of all, how other people change us, usually for the better. Written and directed by David Chase (“The Sopranos”), with an exceptionally attractive, talented cast and an Elysian soundtrack.

Son Seth Rogen and crazed, overbearing Jewish mom Barbra Streisand are stuck alone in a car together for 3,000 miles. Yeah, sounds like hell to us, too; but this out-of-the-box comedy revels in its irritations, eventually honing in on the notion that we’re all naturally kinda nuts in some way, even without our mother’s help. And watch for huge-hootered Vicki Goldsmith as Mom-in-flashbacks; she’s a bulbous hoot.

A handful of underpaid, dead-end supermarket workers, about to lose their jobs due to their store’s closing, pool their pence to buy a lottery ticket together — and win! But the price of prosperity may eat them alive in this Limey drama series. You may recognize the top-notch cast from some of your favorite movies (including more than one “Harry Potter” alum), but it’s the brilliant writing that you’ll be telling your friends about. In turns sad, funny, exciting, thought-provoking, sexy, disturbing, profound and insightful, but never less than completely entertaining. An American ABC version is in the works. Highly recommended.

The amazing Stephen Fry (the Master of Laketown in the next chapter of “The Hobbit”) shares his unabashed love of opera, and in particular, anything by Richard Wagner, in this weird little sort-of doc on the life of Hitler’s favorite composer. Provocative, intimate, funny, exuberant and completely nuts at times, Fry’s passion for the subject carries us along — down the rapids, over the waterfall, to be dashed giddy on the rocks below. Who knew opera could be so much fun?

One of the longest-running, most-watched series of the ’60s, this violent, unrepentant tale of American soldiers, belly-crawling through Europe, knife-in-teeth, would be right at home among today’s most popular cable series. Vic Morrow and Rick Jason lead a truly magnificent cast, all directed by the likes of Robert Altman and Richard Donner. Eight discs; more than 25 friggin’ HOURS of ballsy WWII drama. Get one for the Old Man.

NURSES: IF FLORENCE COULD SEE US NOW

You might expect a straight-up doc on the profession of nursing to be less than thrilling, but you’d be wrong. More than 100 nurses talk about their jobs in ways that make it sound like a religious experience, relating tales of life, death, sorrow, joy and the mystical essence of workaday miracles — all for zero respect and near-zero pay. Inspiring, fun and lively.

If this doc doesn’t piss you off, then you aren’t human. A look at the Texas Board of Education — a group of fascio-Christians, psycho-Creationists and other assorted hate-filled loons — that meets once a decade to make sure that their — and the rest of our country’s — schoolbooks don’t contain any information that might threaten their ignorant, self-righteous narrow-minded world view. And what lengths are they willing to go to prevent a new crop of more rational voices from breaking their stranglehold on a generation? You will be sickened.

This teen horror/thriller gets low ratings on IMDB, but that must be some kind of smear campaign, because we think it was damn entertaining. Justin Deeley (“Couples Retreat”) and Devon Werkheiser (TV’s “Greek”) lead an exceptionally attractive cast in an original story about the return of a legendary witch who supposedly kidnaps and eats children. The teen boys decide to scare up the local girls with a nighttime visit to the haunted witch-house, getting far more than they bargained for in the process. Not terrific by any means, but we enjoyed it.

A colorful biodoc on Vito Russo, an outspoken figure from the early days of the gay rights movement. While still a film student, he was among the crowd at the Stonewall riots of 1969, and continued to march, protest and inspire up until the time of his death from AIDS in 1990. A long overdue look at a true American hero.