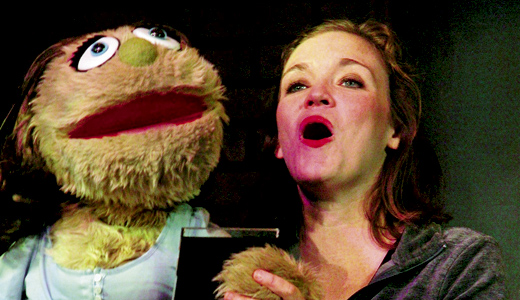 ‘Avenue Q’
A CenterStage production. Continues through April 28. Directed by John R. Leffert. For tickets and information, go to centerstagejcc.org, call 459-0660, or check at the Jewish Community Center, 3600 Dutchmans Lane.

Imagine a world without irony.

If you were trying to conjure up a society completely different from contemporary America, that’s what you’d want to create. Verbal irony, the mindful strategy of saying one thing in order to convey something quite different, is so deeply embedded in American culture (and often so clumsily executed) that future scholars (if there are any) will need acres of computer servers to hold the footnotes (if such things still exist) to explain just the works of Jon Stewart and Stephen Colbert.

Developmental psychologists say that children, once thought incapable of using or parsing irony before the age of 10, now start using it by the age of 4 and are masters by the time they enter primary school.

But “Avenue Q,” the 2003 musical comedy with music and lyrics by Robert Lopez and Jeff Marx and a book by Jeff Whitty, fantasizes an irony-free world populated by a collection of characters who take the stage as both human performers and puppeteers.

The play, which opened last week at CenterStage at the Jewish Community Center, may be the most unabashedly earnest play American musical comedy has ever produced. Set in a dilapidated, low-rent neighborhood of New York City (admirably designed by John R. Leffert, who also directed the production), “Avenue Q” is a place where newly minted college grads, frugal oldsters, curmudgeonly perverts and impecunious has-been celebrities form a zesty, caring community. The inhabitants are portrayed by actors (many in multiple roles) who double as human performers and puppeteers — and pull off the task with gusto.

The central story involves a complicated romance between new resident Princeton (Jordan Price), who is urgently looking for a sense of purpose, and the idealistic young teaching assistant Kate Monster (Katie Nuss, who doubles as the vampy singer Lucy the Slut — whose purpose in life is to steal Princeton away from Kate Monster), whose goal in life is to found a school for monsters (it seems media portrayals always emphasize the bad things about monsters). The couple is surrounded by folks like Trekkie Monster (Brian Morris), a furry monster whose motto “The Internet is for Porn” is grist for just one of the many high energy production numbers (with choreography by Zachary Boone and a fine live ensemble directed by Angie Hopperton) that dominate this play. Others include “Everyone’s a Little Bit Racist” and “You Can Be As Loud As the Hell You Want,” which features the sort of full-on puppet sex you’d never see on “Sesame Street” (an advisory from the theater company warns that the play isn’t appropriate for children).

Other neighbors include the Bad Idea Bears (Morris and Kirsty Calman), whose Long Island Iced Tea recipe leads Kate Monster astray; Brian, an aspiring comedian (Jason Cooper) and his Japanese fiancé/wife Christmas Eve (whose stereotypically broken English is fodder for humor when she sings “When You Ruv Someone”); a group of characters played by David Beach; and Gary Coleman — yes, that Gary Coleman — played with swagger, coveralls and thumbs-up flare by Tymika Prince, whose “Schadenfreude” is one of the standout songs.

The shrill enthusiasm of the production is sometimes a bit much (it seems in puppet land there are lots of high-pitched squeaky voices). But there are affecting moments as well, and in the end we discover that even a pervert can be won over by the power of romance and high ideals.