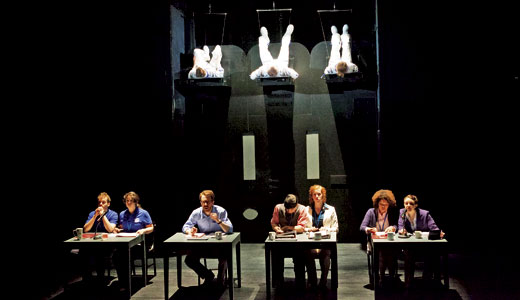 There’s nothing else in the performing arts quite like the Humana Festival of New American Plays. Attend a film festival, and you’ll see works that were fully formed when they were selected for presentation. Attend a music or dance festival, and you’ll find the same thing. Find your way to the new play festivals that have started to crop up the last few years in places like Seattle and Chicago, and the program will consist mostly of readings and workshop productions.

The Humana Festival is a different creature altogether. What Jon Jory and Actors Theatre of Louisville created in 1976 was a festival that would bring together new and established playwrights, directors, actors and technical crews to stage new scripts as full-fledged theatrical productions.

It was a visionary proposition 37 years ago, and one that continues to be an extraordinary venture. This year’s festival, the first under the artistic leadership of Les Waters, runs through April 7 — in fact, it’s still theoretically possible to see all of this year’s productions.

The finest of this year’s plays epitomize what makes the Humana Fest such a fascinating event. One, “Gnit,” by Will Eno, was written by a playwright with an international reputation; the other, “Cry Old Kingdom,” by Jeff Augustin, was written by an MFA student at the beginning of his career.

Directed by Les Waters, “Gnit” seems to have vexed some critics (and audience members) with its alleged difficulty. I reckon those folks were responding to something they expected to see, rather than what actually transpired on stage. Loosely based on Ibsen’s “Peer Gynt,” “Gnit” is a droll picaresque comedy about a narcissist who abducts a bride (on her wedding day), dumps her, falls in love with another woman who rejects him, and spends his life on a journey of “self-discovery” that takes him to various exotic and spectacular places. The play transpires in a series of tableaus that look and feel like postcards (or, to put it in a more contemporary context, Facebook posts) from a person who, no matter the circumstances, sees only him or herself. Under Waters’ direction, “Gnit” is a riot of intelligent wordplay with some brilliant performances — especially the dry arrogance of Dan Waller in the title role and Danny Wolohan as Town — a part that has him flickering from persona to persona as he embodies the incoherent, shape-shifting moods of an entire community. The rest of the ensemble cast (Linda Kimbrough, Kris Kling, Kate Eastwood Norris and Hannah Bos) play multiple parts as well, on a brilliant set (designed by Antje Ellermann) that frames Gnit’s voyage around the world.

A cast of three super performers and outstanding direction by Tom Dugdale bring Jeff Augustin’s “Cry Old Kingdom” to life. Set in Haiti in the mid-’60s under the brutal regime of Papa Doc Duvalier, it is an eloquent investigation of the plight of the artist under a reign of terror. Variations on the story might just as effectively have been set in Vichy France, Stalin’s Russia or Hollywood during the McCarthy era. But Augustin breathes life into his Haitian characters — an artist who has taken refuge in a deathlike anonymity (played by Andy Lucien), his wife who is still lustily committed to the fight for liberty (Natalie Paul), and a young man who bears the physical and spiritual scars of oppression, but who is determined to win freedom (Jonathan Majors). Like “Gnit,” “Cry Old Kingdom” is a trove of rich language and charged performances, but here ideas and actions fuse together to create a simmering and satisfying tension.

“The Delling Shore” (by Sam Marks, directed by Meredith McDonough) and “O Guru Guru Guru or Why I Don’t Want To Go To Yoga Class With You” (by Mallery Avidon, directed by Lila Neugebauer) feel like contemporary melodramas of manners. Marks gives us a drawing-room battle that pits two writers and their daughters against one another in a stifling series of manipulative games (and one really interesting game having to do with books). Avidon offers a series of whining complaints about commercial hypocrisy and spiritual corruption in the world of yoga (highlighted by one brilliant moment — a fine shadow puppet account of one of the tales of how the Hindu deity Ganesha acquired his elephant head).

“Appropriate” (by Branden Jacobs-Jenkins, directed by Gary Griffin) earned early plaudits from critics and audiences — and has already been picked up for a fall production by Wooly Mammoth Theatre Company in Washington, D.C. The tale is set in a crumbling Southern mansion, but what promises to be a penetrating and novel look at racism and its consequences spins out as an unfocused collection of family sins and grievances that’s noteworthy, especially for Jordan Baker’s muscular portrayal of a woman who is more aggrieved than grief-stricken by her father’s death.

The Humana Festival of New American Plays continues through April 7. For info, go to actorstheatre.org or call 584-1205.