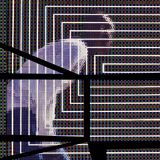 Bygone is the marriage of David Grubbs and the angular noise-rock of previous acts Squirrel Bait and Bastro, replaced by the contemplative pop music started in Gastr Del Sol and continued here in his solo music. Grubbs’ latest explores his colorful history, evidenced by the titular opening track or “Super-Adequate,” which hint at the distorted angst of his earliest projects, while later tracks maintain a playful whimsy, beholden to melody but almost magically ephemeral in structure. It’s this later aspect, the illusion that his songs are loosely constructed, where Grubbs really shines. Here his songs (loud or not) have a hydraulic, airy flow that seems strange on first listen but coheres as if out of the ether. Grubbs’ myriad strengths come to bear throughout the entirety of the album, from his lyrical voice to his proficiency as an instrumentalist.