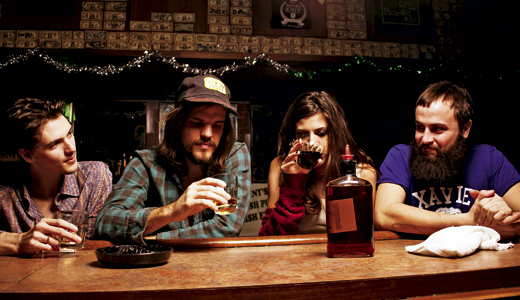 How was your winter? Mine wasn’t great — but Houndmouth’s was awesome. After recording their first full-length album, From the Hills Below the City (due June 4), they hit the road, traveling all over the United States and, for the first time, in Europe, sharing stages with the Drive-By Truckers, Lucero, Alabama Shakes and Grace Potter and the Nocturnals.

They stood out at the 2,000-plus-bands SXSW festival in Austin for the second year in a row, where they were interviewed for NBC’s “Rock Center” and made a new fan in veteran Rolling Stone writer David Fricke. The latter’s support led to Rolling Stone announcing Houndmouth’s album release. In their downtime, they released an eponymous beer made in collaboration with their neighbors, the New Albanian Brewing Company.

On Friday, they return home for a headlining show at Iroquois Amphitheater, whose 2,400 seating capacity is a big step up for the 18-month-old band. LEO Weekly asks guitarist/vocalist Matt Myers if he could guess, in comparison, what the capacity is for a more earthy local venue — the Irish Exit — where the members once practiced their craft. “Man, I don’t know!” he says. “Maybe 200?”

The band’s been getting used to bigger crowds, even if it means balancing some of the quieter moments in their songs with the chattering in the venue. In the album’s closing song, “Palmyra,” Myers sings of a “Kentucky shower,” which he defines as “when somebody takes a shower in the rain … There’s no gross connection with that,” he clarifies, laughing.

“Every time I sing ‘Kentucky shower,’ somebody laughs.”

Otherwise, it’s been a smooth, successful season for the rookies. “All the bands we’ve toured with not only have been great musicians but good people, and treated us really well,” Myers says.

Word of mouth has been spreading quickly, from online to fans of the headlining bands telling their friends. They’ve done especially well in New York. “Every time we’ve played here … we don’t expect anybody to show up, and now we’ve sold out shows. It blew us away, we had no idea.”

Europe has also been eye-opening. “We had some weird shows in France. They didn’t quite get it,” he laughs. “We heard, ‘Your stage presence is strange.’”

London was the best overseas date. “And the Netherlands — that kind of music, the folky sound goes over well in the Netherlands. That was great, too.”

Outside the Netherlands, getting mellow has become easier now that there’s a Houndmouth beer, what the NABC calls “a hopped-up American Wheat Ale.” The collaboration came together when the band filmed a video in their brewery. “We kind of brought that up in passing, that we’d like to do a beer with them if they’d be willing,” Myers says. “When you order it, you become a member of Houndmouth.”

The band went into SXSW knowing how much they’d need those ales to keep them steady during that hectic week. The previous year was “extremely stressful,” he says, “not only because we’d never been, but because we’d been a band for a couple months.” They did well enough then to earn a record deal with Rough Trade, so 2013 promised to be less intense.

“This year, we knew how stressful it was gonna be. We kind of prepared for it. It turned out to be good.”

Their summer adventures include some of their first festival dates, and they’re big ones: Lollapalooza, Outside Lands, and the Newport Folk Festival (where colleague and fan Jim James is a member of the advisory board this year).

With the album almost ready for public consumption, Houndmouth has no plans yet to go back into the studio, though they have been working up some fresh songs for their hometown fans.

“We play Louisville more than any other city, and we don’t want to go out there with all the same material. We’ve been testing songs on the road … hopefully it’ll be nice and tight for the Iroquois show.”

The band is in an enviable place right now, but growing pains are inevitable. One early favorite might be leaving the band soon.

“We’re getting tired of playing ‘Penitentiary.’ We’ve just been opening with it, getting that out of the way,” says Myers. “We know it like the back of our hands.”

Houndmouth with Joe Pug and Ranger