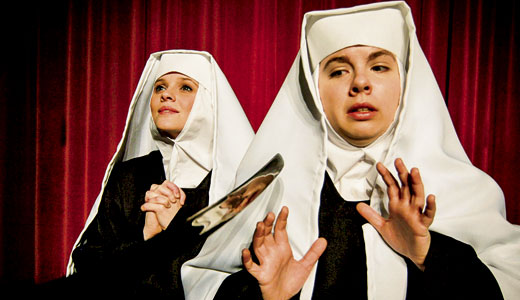 Dialogues of the Carmelites @ KY Center

During its three-year run on Broadway, the musical “Memphis” won four Tony Awards, including Best Musical in 2010. Now a touring production, Broadway Across America brings it to the Kentucky Center stage all this week. Loosely based on Memphis DJ Dewey Phillips, who was one of the first white DJs to play black music in the ’50s, the story takes place among the smoky halls and underground Memphis clubs. It begins as DJ Huey Calhoun discovers his love of rock ’n’ roll music and the seedy lifestyle that lurks long after the sun goes down. He stumbles upon a happening club, where he meets and falls head over heels for Felicia, a black singer. He fights to get her on the radio, and the two encounter prejudice at all levels of society. Rock ’n’ roll was never easy. —Sara Havens

‘When Jenny Lind Came to Town’

Jenny Lind, affectionately dubbed the “Swedish Nightingale,” became one of the most widely adored opera singers in the 1800s, touring Europe with much success. Yet it’s her American tour that Kentucky remembers, because, on P.T. Barnum’s arm, she came to Louisville and performed. More than a century-and-a-half later, Mike Smith, a retired C-J sports writer, has brought the story of Lind’s brief visit to life. The play is a “docudrama,” exploring the details of Lind’s impromptu concert — Smith even included a full-length performance as Lind might have given herself. Chicago actress Betsy Archer stars as Lind and is accompanied by eight members of the Louisville Chorus. Smith’s play promises to pay homage to the Swedish Nightingale. —Natalie French

U of L’s Comstock Hall

Tenor sax heavyweight Javon Jackson came up through the ranks, playing with Art Blakey and Elvin Jones, and subsequently has led his own groups, which have featured Jimmy Cobb and Les McCann. He’s released more than a dozen albums as a leader, such as 2012’s Celebrating John Coltrane. “The spirit of John Coltrane influences me quite a bit,” Jackson tells LEO. Jackson will be in residency at U of L, “to share my experiences, to give (students) perspective on life as a professional, touring artist.” Specifically, he will discuss improvisation. “G7 is universal, so it’s not just for the tenor saxophone. We’re discussing how to learn a solo … Music is about flexibility.” Jackson looks forward to presenting his music here with top-notch faculty musicians, “display(ing) where I’m at musically, within the ancestral stream I’m trying to pursue.” —Martin Z. Kasdan Jr.

It’s funky. It’s fresh. It’s fun. And sometimes it’s even a bit raunchy. Yep, Finnigan Productions again brings its Festival of Funky Fresh Fun to the stage, the sixth year for the production of 10-minute plays. This year, 11 playwrights will see their creations come to life, including first-time writers (Becky LeCron, “In the Driver’s Seat”) questioning our perception of reality and festival mainstays (Brian Walker, “Dry Erase BJ’s”) getting salacious onstage. For those who have attended a FoFFF before, you’ll either be happy or terrified to know that another installment of “The Life and Times of Brittany the Chicken,” an ongoing series by Sherry Deatrick, is on the bill. Part of what makes this festival so fun is that a variety of directors bring fresh visions to the widely varying scripts, and the ensemble of actors take it from there. —Kevin Gibson

‘Street to Studio’ by Teri Dryden

It all started in Paris, a prime location for art inspiration. Teri Dryden, whose love for collage is paramount, began seeing old frayed and torn posters as she traveled throughout France and Italy. These music, circus and propaganda posters had long ago done their job, so she, ahem, “procured” them for her art. “(I was) drawn to the colors, typography and texture of the paper, which gave way to (my) new series, ‘Street to Studio,’” she says. “This illustrates (my) implementation of the dual processes of construction and deconstruction; that is ripping the posters from the wall, then gluing them onto a support and ripping the fragments further to create an abstract composition.” The gallery will be open during the April 5 First Friday Trolley Hop from 5-8 p.m. —Jo Anne Triplett

Active for more than 20 years, Scott Miller may classify as a veteran artist, but with his recent album, he has proven to be just as feisty as ever. Raised on a farm in rural Virginia, he left his parents’ austere lifestyle behind and, in Knoxville, Tenn., founded the V-Roys. After their breakup and a brief-but-successful stint with Sugar Hill, Miller went on to start his own record label and has been producing ever since. His most recent release, a five-track collaboration, features Rayna Gellert’s fiddle and backing vocals as a true testament to Miller’s roots. Miller and Gellert are on tour together, an intimate pairing perfect for a late Friday night. —Natalie French

Based on the strength of their 2012 release Melt Cry Sleep, Minneapolis power-trio Buildings are not to be missed. Accurately compared to the Jesus Lizard, Pissed Jeans and our very own Young Widows, Buildings remain formidable even in such austere company. That they’ve remained busy is an understatement: having completed one European and three U.S. tours with bands like Titus Andronicus and The Men, the Minneapolis trio has certainly earned their accolades. The story goes that this current tour, which takes them through our fair city this Friday accompanied by Louisville indie-wizards Satellite Twin, is in support of their split seven-inch release with Atlanta’s Hawks. Given the muscular nature of each band’s riffage, it seems like a pretty good idea to pack back-pain medicine for all the head banging that will go on here. —Syd Bishop

ConGlomeration boasts itself as Louisville’s very own Sci-Fi and Fantasy Convention, and Wikipedia seems to agree. Established in 2001, the convention has become a local staple, much like RiverCon before it. It’s three days — 72 hours — of multimedia geeking, complete with a game room, art show and masquerade. Those involved in ConGlomeration call it “a labor of love,” and truly, it is; it is a gathering of young and old, all equally excited to share and revel in their favorite shows, games and artists. The best part? It’s a flat rate for the whole three days. No “gold memberships,” no special pass required — it’s open range, an unbiased intermingling of fans, and entirely tailored to suit Louisville. —Natalie French

‘Dialogues of the Carmelites’

U of L’s School of Music Opera Theater presents the 1956 French religious opera “Dialogues of the Carmelites” Friday and Sunday at Bomhard Theater in the Kentucky Center. Claire Divizio, a semi-finalist in the Metropolitan Opera National Council auditions, sings the lead role of Blanche. Patrick MacDevitt, who has sung with Kentucky Opera, takes the role of Chevalier. A primary attraction of the work is its unique final scene, in which voices silence as the singers die, one after the other. It’s a powerful musical statement, but a caution here on the overt religious and political propaganda. The opera casts the French aristocracy and Church as victims of the French Revolution. Nuns under the guillotine. The glorification of martyrdom. —Bill Doolittle

Nashville rockers Natural Child finish up their tour that started at the SXSW festival this night at Zanzabar. Touring as a five-piece, Natural Child create a brand of music that demands a good time of its audience. If you shut your eyes and just listen, you’ll be transported back in time to the days of stripped-down guitar rock, un-ironic moustaches, and tube socks with three bands of color at the top. You might even think you’re listening to .38 Special, Lynyrd Skynyrd or the Marshall Tucker Band, and you’d be wrong, but you’d still have fun; such is the atmosphere that Natural Child provoke. Rounding out the bill are Louisville’s own State Champion and the Chicago bedroom pop orchestra of Animal City. Each band carves out their own unique musical niche, while simultaneously complementing one another. —Syd Bishop

I prefer drinking my bourbon out of a rocks glass or snifter, but in a pinch, I will drink it from a mug, a red Solo cup, a fish bowl, out of a trough or directly from the barrel. I’m guessing the four ceramic artists in Spot5’s latest exhibit, “On the Rocks,” love bourbon just as much as me. The show consists of the artists’ interpretations of the vessels involved with bourbon consumption, and pieces range from functional sipping shot glasses or flasks to sculptural distilling rigs. Keith Carter, Cooper Levering, Matthew Schiemann and Nick Toebaas created this exhibit from their love of the Kentucky spirit, and it truly shows in each piece. It’s unclear whether you can try out the art before you buy it, but I’m gonna pack a fifth of Forester just in case. —Sara Havens

‘MORE or LESS’ by Joel Pinkerton

Anyone who has taken a studio drawing class has met a manikin, those jointed wood statuettes whose flexibility is their claim to fame. Assemblage artist Joel Pinkerton certainly has and, being that he loves found objects, has created his own version with welded steel and heat-fused film. He’s calling them “3D drawings” and has organized his new exhibition, “MORE or LESS,” around them. He is also thinking about his fellow artists. “I wanted to create an opportunity for those interested in figure drawing to bring their sketch pad and drawing materials,” he says, “and take advantage of the models throughout the duration of the exhibit. (They) won’t get tired of holding a pose.” The exhibition will be on view from 6-9 p.m. during the April 5 First Friday Trolley Hop. —Jo Anne Triplett