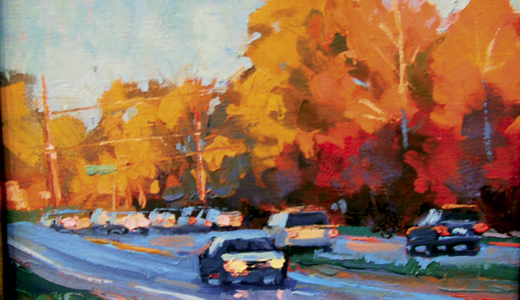 After forming in early 2006, Ra Ra Riot experienced a quick climb to fame, attributed to their energetic performances and catchy demo. Offering a taste of baroque pop and, more recently, synth pop, the band has branched out beyond their native New York, traveling as far as Iceland — and now, Louisville. Featured as WFPK Waterfront Wednesday headliners (and accompanied by fellow indie-rockers Leagues and A Lion Named Roar), Ra Ra Riot will perform songs from their newest album, Beta Love, and past favorites. Considering their original claim to fame was their exuberant concerts, their Louisville show is sure to live up to the hype. —Natalie French

Zomes make music that can be both atmospheric and rhythmic, immersing the listener in an ambience wrought by repetition. Consider the source — Asa Osborne, formerly of the equally transcendent Lungfish. Initially a solo project, Osborne sometimes invites performers to help expand his songs, in turn emphasizing the ephemeral boundaries inherent in his music. Most recently, Osborne has been collaborating with Hanna Olivegren, a vocalist, composer and improviser from Stockholm. The duo is touring in support of new release Time Was, which combines the haunting vocal melodies of Olivegren with the harmonious drones of Osborne. That Time Was marks the first Zomes album not recorded on a cassette tape, produced instead in a studio, implies an aesthetic shift that mirrors the band’s evolution. This ought to be interesting, given Zomes’ predilection for live experimentation. —Syd Bishop

Sallie Manassah’s newest play illuminates issues often labeled with a somber taboo: the process of aging and the stigma that accompanies old age. Five women in their 60s meet once a month over a game of cards to discuss their lives and families. They’ve known each other for more than 40 years, and invariably, the subject of age, family and death surfaces — but with their parents entering their 90s, the future becomes shakier than ever. In this Bunbury Theatre production, Manassah sheds light on five women as they question the value of life beyond their prime, demonstrating a certain strength that only grows with age. —Natalie French

It’s Derby … again. Time to booze it up on mint-flavored bourbon and go outside in hats you wouldn’t be caught dead in the other 364 days of the year. Just like the rest of us, The Bard’s Town is spreading the celebration out again this year with their special “12 Days of Derby” — for 12 nights leading up to what some consider the most exciting two minutes in sports, The Bard’s Town will host a different themed event. The nights will consist of things like “Funny Cide of Louisville Comedy Contest,” “The Great Creamboat Face” (I’m fairly convinced that has little or nothing to do with pornography), or The Stable Brown Party (it’s a Halloween party in May). For details on all the events that take place over the 12 nights, check out their website. —Brent Owen

On the count of three, everyone shout, “Chow Wagon!” Don’t deny your love for the Derby Festival event that serves up deep-fried corn dogs and buckets of draft beer and is set to tunes from bands both local and national. This year’s national highlights on the Kroger Fest-A-Ville stage include crooner Uncle Kracker (April 27), “Word Up” originator Cameo (April 30), trendy rockers The Features (May 1), and ’90s posterboys The Wallflowers (May 2). And beginning Thursday, local bands fill up the Miller Lite stage every day leading up to Derby. Highlights this week include J.D. Shelburne (April 25), Jefferson Tarc Bus (April 26), Kirby’s Dreamland (April 27), Eight Inch Elvis (April 30) and — my favorite — the Velcro Pygmies (May 1). Check our Plugged In listings for more info. —Sara Havens

History fans take note, David Dominé, Louisville’s only (that I know of) author, college instructor, entrepreneur and ghost tour guide will be speaking about and signing his brand new book, “Old Louisville: Exuberant, Elegant, and Alive” at Carmichael’s Friday evening. The beautiful 248-page large-format book is filled with hundreds of glossy photographs, illustrations and maps. “Old Louisville” is more than just eye candy, though. Dominé details the history, architecture and current state of 50 homes in the historic neighborhood. A second appearance that will include the photography team has been scheduled for May 10 at the Barnes and Noble on South Hurstbourne Parkway. —Sarah Duncan

The Gilbert & Sullivan Society of Louisville was inspired by the Victorian-era stage geniuses W.S. Gilbert and Arthur Sullivan. They were particularly known for their absurd works, mixing fantasy with reality, akin to Shakespeare’s comedies. GSS was established in an effort to inspire other fans of Gilbert & Sullivan and to share the operas written over the course of the partnership. “Trial by Jury” is a satire revolving around the rules of engagement and marriage; it first premiered in 1875 with excellent reception. It is this same humor and reception that GSS strives to carry over into the modern world, while boasting a cast comprised entirely of Louisville natives. —Natalie French

‘Artists in Our Midst’

You’re just not trying if you think you can’t connect with the visual arts. Even if you only like scenes of dogs playing poker, there’s an artist for you. In fact, you can’t swing a Louisville Slugger around here without hitting one. As far as I’m concerned, that’s one of the things that makes this a city great. Apparently Kaviar Forge & Gallery thinks so, too. The nearly 30 artists featured, such as Claudia Hammer, Lynn Dunbar and Joanne Weis, cover a wide swath of styles and media. And not only are the artists local, many of the scenes are, too. Don’t worry — you’ll feel right at home. The reception is during the April 26 F.A.T. Friday Trolley Hop from 6-9 p.m. —Jo Anne Triplett

Imagine a massive block party, crank it up a few notches, then throw in the joy of shopping for unique, creative wares. The result: Cherokee Triangle Art Fair, an annual spring tradition now in its 42nd year. More than 200 artists will peddle goods ranging from screen prints and handmade jewelry to wooden bowls and tea-cup bird feeders. In addition to arts and crafts aplenty, the fair offers a plant booth, activities for kids, including a children’s parade that kicks off the festivities Saturday morning, live music, lots of tasty food, and, of course, beer! Note: This is a pet-free event due to poorly behaved pooches causing past problems, so leave the dogs, cats, ferrets and other domesticated critters at home. —Sarah Kelley

No Wave, an early ’80s reaction to new wave punk, came and went in a few short years, and has, by my estimation, received very little praise in the interim. The Austin, Texas, band Marriage, though, proves that No Wave isn’t just an artifact of a bygone era but an ever-thriving approach to sound. Touring in support of their full-length For Brötzmann, available via Monofonus Press, Marriage creates music that gleefully blends noise with groove while skillfully managing to remain melodic. Also playing are Tropical Trash and Alcohol Party, both locals who also owe a bit to the No Wave scene. To top this off, Tropical Trash and Alcohol Party will have a new split-release cassette available. For fans of the stranger side of rock music, I’m not sure what more you could want. —Syd Bishop

Derby season won’t even know what to do with this night of cabaret, costumes, ceramics and gender dynamics. This “Pre-Derby Formal” — cited as a darker alternative to the more typical society balls — encourages dressing up in something shocking. Upon arrival, adult guests will be handed a complimentary ceramic shot glass by local artist Dan Marshall, with a shot of bourbon waiting inside to greet you. Veteran avant-garde chanteuse Little Annie and performance artist/pianist/circus sideshow pro Baby Dee recently collaborated on an album, State of Grace, a must-listen for fans of Weill & Lenya. A choir of local singers will join them, and it’s possible one of those might be Bonnie “Prince” Billy himself — Bonnie and Superwolf partner Matt Sweeney produced a Baby album in 2007, and the former also appears on Grace. —Peter Berkowitz

It was recently announced that the 500-600 blocks of South Fourth Street have had a facelift. The area from the Brown Hotel to the Seelbach has been dubbed “SOFO” (in case “South Fourth” was too hard to say) and will be largely populated by local entrepreneurs. Some of the stores, from Broadway to Muhammad Ali Boulevard, have already opened, such as Art Eatables, The Leading Man and Les Filles Louisville. I’m happy to say many of the stores feature visual art in some way, such as the third location of Regalo with its second floor exhibition space. Gifthorse plans to show art in the future. Celebrations has a frame shop, while the Block Party Handmade Boutique is a co-op retail space with 60 local artists and vendors selling an abundance of art, jewelry and sweets. Crafts(s) will open in June, so stay tuned. —Jo Anne Triplett