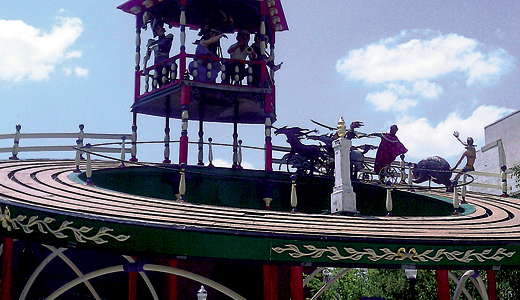 The signature slogan “keep Louisville weird” prompts questions of genesis. Where, when and why did we get so endearingly eccentric? The answer begins in the mid-1970s on the River City Mall, an anemic scheme to revive Fourth Street (between Liberty and Broadway). Remembered for its wig shops, it attempted to solve a problem filmmaker Al Shands defines in the introduction to his documentary, “The Craziest Thing You Ever Saw.”

“Louisville searched for a way to bring life and excitement to a declining downtown,” he says in the film.

The documentary captures the creation and 1976 dedication of the Louisville Clock. It’s a story of urban innovation in the face of desperation, long before weird was so wonderful.

“When I first thought about asking for money for an animated clock, I’d even wondered if I was crazy,” former Mayor Wilson Wyatt Jr. says in the movie. “I thought it was so fantastic and so far-out that Louisville would never do it — no city would do it.” But “we had a problem that needed a unique solution.”

Industrialist Henry Heuser Sr. would help fund it — with a caveat: “If somebody would ride by once, then it was no good. But if they would park their car, get out, come see it, and do it repeatedly, then it would meet that acid test.”

After a yearlong, worldwide search, a committee selected local artist and sculptor Barney Bright (a student of “The Thinker” creator Auguste Rodin). He agonized overtime for two months until he drafted a design that excited him. But reaction was mixed.

“Somebody said (it resembled) a pregnant woman holding a doughnut,” Heuser says of an early version.

“I said, what I’ve got is a mixture of sculpture and toy; let me make it all toy,” Bright explains in the film.

Devoid of the pregnant woman, the redesign was a hit, combining the history of Louisville and the Kentucky Derby via a mix of color, sound and lights.

The restored documentary, part of KET’s “Kentucky Time Capsule” series, shows Bright crafting the historical figurines that race around a track with others overlooking it from a Victorian-style gazebo. He confesses he is “not a caricaturist by nature,” but his mastery of the form explains why each exaggerated face became his favorite as he created it.

At the beginning and end of the documentary, faces among the nearly 3,000 spectators who witness the maiden race of the world’s largest folk-art clock display the affection Heuser desired.

However, through the blizzard-like winters of the late 1970s, the clock fell into disrepair and often sat idle — especially after developers paid $100,000 in 1981 to move it one block south. It moved again, in the late 1980s, to the Fair and Expo Center. In 1993, the city dismantled and mothballed the iconic timepiece in a Smoketown warehouse.

It took a socially interconnected village of leaders to raise it from the tomb and many free hands to move the clock forward. Steve Wiser, an architect, historian, preservationist and author, had the pedigree to take the lead. Early in the millennium, a friend of his, antique clock repairman Ken Machtolff, put him in touch with Adam Burckle, a dessert entrepreneur (owner of the Homemade Ice Cream and Pie Kitchen stores) renowned for his stalwart spirit. “Adam was also into clocks and toys — and he’d just donated a big mechanical toy called ‘The Carousel’ to the zoo — so this really fascinated him,” Wiser tells LEO.

With Burckle the de facto chief executive and Wiser the chief operating officer (as volunteer coordinator), the long and winding marathon to restore the clock began in 2003. An effort to place it at the zoo started and stalled. Two friends of Wiser’s, architects Bill Weyland and Steve Eggers, pushed to return the clock to Fourth Street, on Theater Square (west of the Brown Hotel). The trio enlisted the support of downtown developer George Stinson and city officials.

“They said, ‘Yeah, that’s great; that’s perfect,’ because they were looking for something to kick-start South Fourth Street and, quote, clean up the area a bit,” Wiser says.

But the clock was in pieces, some of which were damaged, and there was no owner’s manual. Wiser credits Alliant Technologies, notably Rob Camarota, for providing “the technology components of the clock to actually make it work properly.” Among Alliant’s specialties is conveyor-belt logistics, a rather un-evolved science when the clock was created. As a result, if one racer malfunctions, the other four may finish. That wasn’t the case with the original clock, which “was run, literally, by bicycle chains and eight-track tapes,” Wiser says.

More work remains to restore the clock’s animation (the paddlewheel on Bright’s Belle of Louisville, for example). Beyond completion, Kindred Healthcare will fund maintenance.

And changes in color are acutely controversial with purists, including Bright’s family and famous protégé, sculptor Ed Hamilton. “A rainbow of wrong colors was chosen,” Jep Bright, Barney’s son, tells LEO of the restoration. “The clock, instead of looking like an antique toy, as Barney intended, looks like a carnival ride.”

Nevertheless, Jep celebrates the clock’s Theater Square location “with little likelihood of ever having to be moved again.” It was re-dedicated there, with great fanfare, last August.

Since then, there are signs of new life, including a retail and restaurant revival, on Fourth Street.

Bright’s joyful toy, which races daily at noon and 6 p.m., is back in its cradle, this time drawing retail and pedestrians more successfully than it did amid the inferior infrastructure of the wig shop era.

The Arts Council of Southern Indiana recently honored the prolific sculptor, who died in 1997, with exhibits at three venues. The clockmaker’s legacy looms larger than ever.