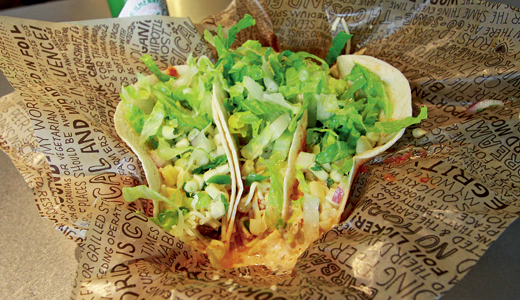 Chipotle is here at last. Let the congregation say “Whoopee!” The 20-year-old Denver-based fast-food chain built about 1,400 units in 43 states (including a few properties in Lexington and about 30 in Greater Cincinnati) before one finally opened in downtown Louisville last month.

Quite a few people have apparently been waiting a long time for this. When we showed up for a late lunch last week, we faced a 20-minute wait. Patient supplicants were lined up all the way back to the entrance of the smallish, glass-walled eatery tucked into a corner of the Hyatt-Regency Louisville. It was pretty much worth the wait, too, at least as much as fast food can be worth waiting for.

Why the excitement over the arrival of another national fast-food chain? Perhaps it’s because Chipotle is not just any fast-food chain. In a New York Times Magazine article this month, food writer/food anthropology pundit Mark Bittman declared Chipotle “the best newcomer of the last generation,” based on its commitment to quality and (relatively) healthful fare that breaks the pattern of the fast-food giants.

“There’s now a market for a fast-food chain that’s not only healthful itself, but vegetarian-friendly, sustainable and even humane. And, this being fast food: cheap,” Bittman wrote. It’s a formula that works for Chipotle, which bills its product as “food with integrity … the best ingredients raised with respect for the animals, the environment and the farmers.”

This is a promise that appeals to increasingly health-conscious Boomers and youthful hipsters alike, and anyone who likes the idea of fast food built on humanely raised, hormone-free “natural” beef, pork and poultry and organic and local produce. (Pay no attention to the “whenever possible” and “when practical” language that accompanies those pledges … I’m sure it’s only the lawyers who make them say that.)

Chipotle enjoyed a boost when mega-corporate McDonald’s became its major investor in the late ’90s and early ’00s, infusing sufficient cash to build the Chipotle empire from 16 to 500 restaurants between 1998 and 2005. Mickey D’s divested all its interest in 2006, but Chipotle hit the market with a winning IPO … and over the next few years tripled its reach again.

Chipotle’s sales reached $3 billion last year, Bittman said, and while that may be a tiny fraction of McDonald’s $88 billion, it should still be more than sufficient to keep the stockholders happy.

Does it keep the dining public happy? The consistent crowds seem to say “yes,” and I was impressed with the flavor and quantity of our lunch. I see hard times ahead for the Qdoba across the street, as Chipotle fits into the same fast-casual model as its neighbor but offers far more fetching fare.

Bittman calls Chipotle “improved fast food … the food is fresher and tastes much better than traditional fast food. The sourcing, production and cooking is generally of a higher level; and the overall experience is more pleasant.” I agree with 90 percent of that, although the combination of happy customer noise and a recorded drum track boosted the sound level a bit too high.

It’s very simple to order here, once you and the guy behind the counter establish communication. Check the clearly listed calorie and sodium content if you dare, then choose one of the four basic categories: burrito, taco, burrito “bowl” (the innards without the wrap) or salad. Take your choice of steak, beef barbacoa or pork carnitas ($6.65), or chicken or veggie ($6.25). Pick from four salsas and sundry toppings; watch the guy build your lunch, pay and eat in or take out.

A carnitas burrito at least as big as, if not bigger than, your head came snugly wrapped in foil. An oversize flour wrapper was filled with rice, smoky, bacon-scented pinto beans, mild fresh-tomato salsa, and the payload, a mound of “pulled” pastured pork and onions that could have passed for a well-made Cuban lechon asado.

Happy and full, we left with my wallet only $15.37 lighter; this being a fast-food joint, after all, there’s no provision for tipping.

Food Truck Sunday comes to St. Joe’s on April 21
It might look like the annual St. Joseph’s Children’s Home festival has returned out of season to the home at 2823 Frankfort Ave., from 11 a.m.-2 p.m. on Sunday, April 21, but in place of the festival’s traditional cake wheels and free-flowing industrial beer, you’ll find a few food trucks. A squadron of mobile meals including Grind Gourmet Burger Truck, Sweet ’N’ Savory, French Indo-Canada, and Homemade Ice Cream and Pie Kitchen will converge on the shady lawn for the first Food Truck Sunday, a festival sponsored by the Frankfort Avenue Business Association. There’ll also be sidewalk sales from retailers and neighborhood residents from 11 a.m.-4 p.m.