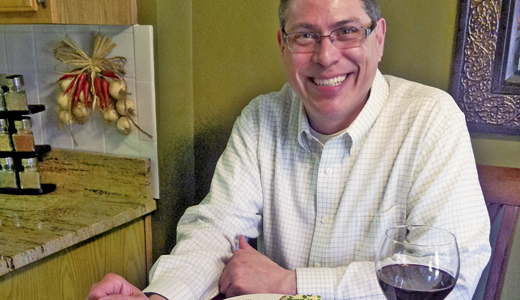 It was a chance encounter at the Douglass Loop Farmers Market back in December. At one of those booths where I don’t usually stop, a man was smiling in my direction, inviting my husband and me to sample his product.

Normally the business of sampling gives me a mild case of heebie-jeebies. If I try a bite, I feel obligated to buy the product or risk being seen as a jerk. I don’t want to be a jerk. I don’t want to tell the vendor waiting eagerly for my response — a person who’s poured hopes and dreams into the sample I’ve just tasted — that his life’s work is not my style. Then again, I don’t want to shell out cash for a product I don’t really want, just to salve my conflict-avoidance gene.

My normal tactic is to avoid eye contact and walk briskly past. But somehow, this guy snared us. Mid-30s maybe, dark hair, nice smile. “Would you like to try some habanero butter?” he asked.

My husband and I glanced at each other, meaning: “Why not?” We tried a schmear of the stuff on some bread, and this time the glance we exchanged said: “Heeeey! I like this stuff!” We walked away with a tub for us and a tub for a friend. It was that good.

What we bought was Roasted Habanero Gourmet Butter, a Kentucky Proud product from DJ Gourmet. In the weeks that followed, my husband and I became addicted to the stuff. It is smooth, creamy and piquant, dotted with bits of fresh garlic, jalapenos and habaneros. There’s a hint of olive oil in the concoction. The sweet cream butter supplies a fresh dairy goodness; the peppers lend a bite, leaving the lips and tongue pleasantly aglow with a low, slow tingle that hovers just below the threshold of a burn.

The label on the 7-ounce tub proclaims the product a “great addition to seafood, steak, chicken, baked potatoes and vegetable dishes,” but in our kitchen, we favor it on omelets and plain old toast. When we tried pairing it with key lime marmalade from Ruby’s Hill Jam (another Kentucky Proud product, this one procured at the Bardstown Road Farmers Market), we went nuts. The heat of the butter combined with the tang of citrus took us to a corner of taste-bud paradise we’d never visited before. Toast would never be the same.

“Melt a little and try it on popcorn, too,” advises David Olivarez, the man behind DJ Gourmet, who handed us that sample back in December. It turns out he is a one-man show, with a little help and advice from family and friends. A kid who grew up working in his family’s Mexican restaurant in Kansas City, Olivarez tried other careers, but after the packaging company he worked for folded early last year, life began to pull him back toward a career in food.

He didn’t want to get into the restaurant business again, but he was keen to do something with the recipes his mother, a first-generation American of Mexican descent, had perfected in the family restaurant. One recipe combined a mix of roasted peppers and garlic, which his mother used in a sour cream dip. Olivarez took the mixture and blended it with butter, then turned to Mom for advice. She packed her bags and came to Louisville to help her son perfect two versions of the recipe — one with jalapenos alone, the other with habaneros added.

Once the recipes were nailed down, it was a matter of going into production: finding a commercial kitchen to rent by the hour, getting labels designed, passing health inspections, etc. Olivarez bankrolled the operation himself and had his product in hand by late August last year. Next came research, which meant handing out more than 500 samples over a few late-summer weekends at the Douglass Loop Farmers Market. Luck was on his side — one of those samplers turned out to be the food buyer for Liquor Barn, who liked what she tasted. Suddenly he had his product in Liquor Barns throughout Louisville and Lexington.

Ah, but the perils of the one-person operation. DJ Gourmet had barely gotten off the ground when personal turbulence in the form of a divorce shut down operations for months. Only in the past few weeks has Olivarez gone back into the kitchen roasting peppers, softening butter, adding the other ingredients and blending it all in a big commercial mixer with a whipping attachment. (“The whole key,” he says, “is to get a good mix of the pepper inside the butter, so when someone takes a dab of it, they’re getting everything.”) He packs the tubs using an oversized ice-cream scoop, loads up his car, and drives the product to the stores.

Olivarez is back in business just in time for spring and the seasonal opening of the Douglass Loop Farmers Market. After selling out during his hiatus, his gourmet butters are back on the shelves at Liquor Barn. And in the weeks ahead, he plans to approach buyers at other small groceries. “The good thing about Louisville,” he says, “is you can be a small guy and take a shot. You’ve got your ValuMarket, your Paul’s, your Rainbow Blossom, that hopefully will be willing to give a guy like me a chance.”

Further down the road, Olivarez hopes to find a partner to take over manufacturing and packaging so he can concentrate on sales, marketing and delivery. Beyond that, he has visions of going wholesale and selling to caterers and restaurants. Right now, though, the trick is to get his butters into homes, tub by tub, and that takes product recognition. He does best at farmers markets and tasting events, where curious passersby try samples, and where even sample-shy passersby like me sometimes get hooked.

In the long run, Olivarez is optimistic about his chances. “I think the butter has a real shot. Because —” and here he delivers one of the great truths of human nature — “people like butter.”

For more info, go to djgourmetbutter.com.