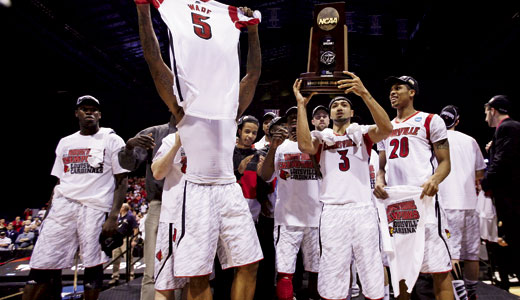 From the day the seedings and pairings for the 2013 NCAA Tournament were announced three weeks ago, everyone knew Louisville, as the No. 1 overall seed, had been handed the easiest possible path to success in the early rounds. That’s the reward that goes to the team deemed best in college basketball by the tournament selection committee. And that’s the way it worked for Louisville, which burned by North Carolina A & T, Colorado State and Oregon — despite dire warnings from U of L coach Rick Pitino that Oregon was the greatest No. 12 seed he’d ever seen in the history of the NCAA tournament, and Colorado State was the best rebounding team on earth.

But everyone also knew that eventually — waiting down the path of a championship run for the Cardinals — lay that baddest of bad news: a likely date with Duke, the most consistent winner in the game. In this space two weeks ago, we tabbed Louisville and Duke 1-2 in the tourney, and knew that unless something unusual happened, Duke would be the big boulder for Louisville to roll away on Easter Sunday.

But no one could have foreseen that this battle royale of superstar teams would change in a second with a horrifying injury to Louisville guard Kevin Ware. In just the past month, Ware had played the best basketball of his young career, fitting himself into a rotation of guards that solidified the Louisville attack. But now Ware, coming down awkwardly from a high leap, lay on the floor with a snap-broken compound leg fracture. His teammates shocked to the core, tears running down their cheeks. Just 20-something-year-olds, with all the adrenaline knocked out of them. The game was halted for nine minutes — not just for doctors to attend to Ware, but to let the shock wave play out on the floor, through the crowd of 34,000 in Lucas Oil Stadium, and among millions more watching the game on television.

When play resumed with 06:33 remaining in the first half, Louisville was still reeling — and Duke looked rocked as well. But the Cardinals composed themselves at halftime in the locker room, with Louisville coach Rick Pitino reminding them that the stricken Ware had asked only that his teammates carry on, repeating, “Just win the game.”

Which they did, 85-63, pulling away with authority through the final minutes to advance to the NCAA Final Four in Atlanta this weekend, where Louisville will need two victories to secure the school’s third national championship. Louisville meets Wichita State at 6:09 p.m. Saturday night (CBS, WLKY-32). Syracuse and Michigan square off in the second semi-final, with the winners playing for the championship Monday night in the Georgia Dome.

For this reporter, and we know for Louisville fans, it was some hours after Sunday’s game before the emotional impact receded enough to savor the basketball part of a victory over Duke and a ticket punched for the Final Four.

But before heading on to the basketball of it all, let us recall an anecdote about the sophomore born in the Bronx and raised in Atlanta:

It was Media Day last fall, a time when reporters try to pry interesting personality tidbits from the players. We posed one of those fishing-expedition questions, something along the lines of, “So Kevin, when you’re not practicing basketball, or having to study …” when Ware suddenly interrupted. “Oh, I like studying,” he said. “I like school and finding out about things I don’t know.”

An impressive and unexpected answer from a guy who shined this season, even as he lay injured on the court, repeating, over and over, “Just win the game.”

Ware underwent a successful operation Sunday night in Indianapolis to reset the fractures, with all optimism for recovery. He returned to Louisville Tuesday and plans to be on the bench alongside his team in Atlanta.

And now on to the basketball of things.

Louisville emerged this season as a team determined to win with its defense — deploying a withering full-court press that resolves into a dizzying array of complex half-court defenses. Any direction you go, a door slams in your face. But as the regular season wound into tournament season, the Cardinals added a potent offensive attack to go with all that guarding the other guys. And both were on display against Duke.

Still in the bright blush of victory in the moments after the game, and before heading to post-game press conferences, Pitino allowed himself to exhale a deep breath of satisfaction with WHAS radio broadcaster Paul Rogers. “Our offense, Paul, has caught up to our defense,” Pitino declared. “We’re wearing them out now with our offense, as well as our defense.”

And the scoring power was certainly something to see, with Louisville guards Peyton Siva and Russ Smith relentlessly knifing through Duke defenders for lay-ins and dish offs — often accompanied with acrobatic twists and shots that kissed softly off the backboard.

On the right occasions, Siva slipped the ball to 6-foot-10 center Gorgui Dieng, who has — just in time for the tournament — added a crisp 15-foot jump shot.

But “Russdiculous” Smith doesn’t pass as much. He’s a “volume shooter” who needs to keep his shot count up to conduct a volume scoring business. Smith has upped his regular season 18-point average to more than 20 in the tournament, with CBS analyst Clark Kellogg declaring, “Russ Smith is virtually impossible to stop in the open court.”

After seeing Smith and Siva run wild, it is interesting to hear how much attention to detail is involved in making that happen. How much teamwork goes into the Cardinals “pick and roll” offense — in which teammates set precise picks, allowing the guards to roll.

Louisville is a success because its players are savvy and quick enough to instantly respond to changing conditions on the floor. They react like a whip, sometimes ahead of the crack. But Siva says Pitino offers an occasional tip. “He tells us he’s just over there seeing the game and we’re the ones doing all the work,” Siva says with a laugh.

“At halftime, he was trying to tell us how to adjust (the mechanics of the pick and roll), and I was trying to cut him off, saying, ‘Coach they’re playing like this.’ And he said, ‘Just listen to me, Peyton, I got this.’”

Pitino told his team to set a higher “ball screen” to stretch Duke’s two tall defenders farther from the basket, and to add an extra screen before the main screen, to get the tall timber moving sideways. And suddenly Louisville’s guards were gone.

“He’s just the master at what he does,” Siva says.

For the Final Four, the pairings again seem to favor Louisville. Historically, in the championship round, favorites win. Louisville (33-5), which has beaten every tournament opponent so far by convincing margins, should handle Wichita State (30-8).

Veteran Louisville fans will happily reach back in history to recall Wichita as one of the great powerhouses of the Missouri Valley Conference, when coach Peck Hickman and center Westley Unseld led the Cardinals into the league in 1965. The Wheatshockers called themselves “Shockers” and smothered opponents with a full-court press — as Louisville does today. But Louisville in 2013 has too much height and quickness. Expect center Gorgui Dieng and forward Chane Behanan to control the game.

Louisville also is aided by the pairing of red-hot Michigan and U of L rival Syracuse — so the Cardinals won’t have beat both.

Michigan (30-9) flashes a galaxy of three-point shooters, while Syracuse (30-9) has finally found its stride, led by tall guard Michael Carter-Williams and coach Jim Boeheim’s patented 2-3 zone defense. Syracuse dominated Indiana. Can’t see any way it would be advantageous for Louisville to play Syracuse a fourth time this season, but that’s probably what will happen — Big East War IV in the Final IV?

A tall order for Louisville, but the Cards have their command from Ware: “Just win the game.”