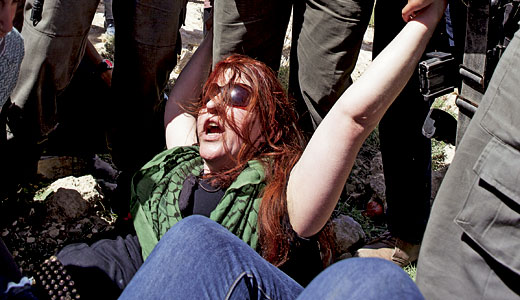 On March 15, I left Louisville for a 12-day freedom ride through the Israeli-occupied West Bank of Palestine on the Freedom Bus, sponsored by the Jenin Freedom Theater of Palestine. As a representative of Louisville Jewish Voice for Peace, I joined other filmmakers, actors, musicians and artists from all over the world (including Israel) to work with, learn from and offer protective presence to Palestinian farmers and shepherds in the Jordan Valley and South Hebron Hills. Here is some of what we saw:

Intisar, a Palestinian woman living in the South Hebron Hills, wants to make us some bread with thyme. She invites me to pick the thyme across the road in the lush valley that has belonged to her village since before the founding of the state of Israel. We cross the road and are soon flanked by Israeli soldiers who tell us that if we do not leave immediately they will “declare it a closed military zone” and arrest us both.

This is the daily experience of occupation in the West Bank. Arbitrary rules imposed by Israel for one purpose — to make life impossible for the Palestinians who live there so they will be forced to leave their homes and their lands.

An elderly Palestinian man says his village once had lush agricultural fields, explaining that a well provided all the water they needed. Then the Israeli military came and diverted the well and declared 75 percent of their land “a closed military zone,” confiscated it, and demolished many homes. Israel “granted” the village 3 percent of the amount of water it needed, and now the land is dry and full of thistles. The villagers travel miles to buy the water they need. Within view, there are illegal Israeli settlements where the well water now travels. The modern houses of the settlers, surrounded by lush green, are in stark contrast to the dust-covered tents of the villagers we meet.

Everywhere we go the stories are the same. We meet Palestinians who have had their homes demolished two or three times by the Israeli military. We see the remains of a mosque demolished two times. We enjoy the smile of a woman whose family has successfully built a house of concrete bricks and covered it with a tent; Palestinians are not allowed to build any permanent structures, and they face fines, arrest and imprisonment if they do. One man says, “As soon as a door to survival opens for us, the Israeli military closes it.”

We see a video filmed by the Italian group “Operation Dove” that shows Israeli settlers attacking the children of At-Tuwani and stabbing the village donkey to death. We see many photos of sheep dead on the hillside, shot by the settlers. Israeli human rights groups have documented these incidents as well (btselem.org).

Many of the Palestinians we meet are determined to stay on their land, despite continual persecution.

A Palestinian woman tells us that after fighting a legal battle with Israel, they won electricity for their village, then “one night we heard Israeli jeeps and saw the jeeps being used to tear down the electric poles. We immediately called people in the village, and suddenly I became stronger than I ever imagined and lifted a big rock onto the road to block the jeeps. Soon other villagers followed my example, and we were able to stop them from destroying our electricity.”

A young woman tells us the Israeli military arrested and imprisoned her father for accessing the natural spring beside their house and trying to build a well. That night the youth from her village finished the well, disguising it under rocks and tires. A village elder explains this kind of nonviolent resistance is what is keeping them alive. He tells us, “We don’t want to hurt anyone or send anyone away. We just want them to recognize that all the people who walk on this land are equals.”

In the Jordan Valley of Palestine where Israel controls 90 percent of the water, members of our Freedom Bus work on building a school out of mud bricks. There is no running water or electricity, but the Palestinian villagers host us with hospitality incomparable to anything I have ever experienced.

While we are building the school, Mayoub, a leader of the Palestinian village, comes over to us, puts his hand on his heart, and says, “Someone told me that there were several Jewish people in this group, and I just want to tell you that makes me feel so happy. The Israeli government wants people to believe that Palestinians hate Jews. That is not true. What we hate is the occupation by Israel, so I want to tell you welcome, you are always welcome here, and thank you.” There are tears in his eyes. I am standing there considering the fact that Israel pretends to do what it does in the name of Jews everywhere, and that my government grants Israel $3 billion a year, without which this occupation would not be possible. I can barely speak, except to say, “Thank you, and we will share your stories when we get home.”

Defenders of Israel’s occupation of the West Bank like to say it’s about defending the settlers. They don’t address the fact that all Israeli settlements in the West Bank are illegal under International law. When you take land and water from the native people, destroy their livelihoods and homes, and give their resources to your own population, there is going to be conflict. No people have ever accepted living under occupation, and the Palestinians in the West Bank have lived under Israeli military occupation for 45 years. People everywhere who truly want peace with justice must know it begins by ending the Israeli occupation.

Sonja de Vries is a local writer, filmmaker and activist. For more information on the Freedom Bus, visit freedombus.ps. For more stories from the author, visit louisvillepoetinjenin.blogspot.com.

Sonja de Vries will discuss her recent trip to the West Bank during a public forum at the Anne Braden Center, 3208 W. Broadway, on Sunday, April 28, from 3-5 p.m.