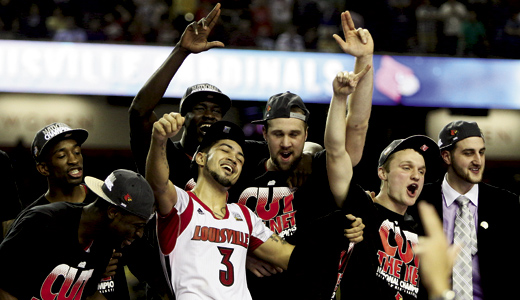 Champions are forged from tempered steel. From elements to elegance, they are a beautiful construct.

Ore begats ingots, which are forged into girders and cross beams. Some structural, some ornamental, all integral, none less important than another.

If the contemplation to be made is how champions evolve, now is the time for that consideration.

The University of Louisville won its third men’s basketball championship Monday night with a steely 82-76 victory over a carnivorous bunch of Wolverines representing the University of Michigan. In a scintillating battle, a classic encounter most worthy, the Cardinal juggernaut displayed its considerable mettle.

These grand champion redbirds, like all winners, have back stories that illuminate their genesis.

Consider Luke Hancock, the first non-starter in the history of the NCAA tournament to be honored as Most Outstanding Player in the Final Four.

A late addition to this Cardinal team, Hancock is a transfer from George Mason. A mystery to his future teammates when he arrived in town, before he was eligible, he goaded them to greater readiness during practice sessions and in the weight room.

His leadership was established, but props for his play was slower to evolve. Shoulder injuries diminished his performance. Early in his first Cardinal season, his shots didn’t drop, his footwork was slow. Cardinal fans wondered why his teammates and coach continued their praise.

On Monday, as on Saturday last, and as he displayed with nurturing class in the immediate aftermath of teammate Kevin Ware’s horrific injury, he showed why.

Louisville was forced to call a timeout with 3:51 to play in the title game’s first half. Spurred on by a zero-star freshman named Spike Albrecht, who scored 17 points on 6/7 shots, including four of four from Peachtree Street, Michigan surged ahead of the favored Cardinals, 33-21.

Moments later, Hancock, who seriously considered matriculating to Ann Arbor before choosing Derbytown, turned the game. First he hit two free throws. They were matched by Michigan. The margin remained a dozen.

Then came the wonder. Hancock drained a three at the 2:59 mark. Then another with 2:35 to play before intermission. Improbably, yet another 40 seconds later, to trim the Cardinal disadvantage to four points.

Finally the exclamation point, a fourth three-pointer at the 1:00 mark. The Wolverines’ lead had been willed to a single wafer-thin digit.

In a tick less than two minutes, with sadness in his heart, the weight of his father’s serious illness burdening his injured shoulders, with the eyes of the basketball world — and the largest crowd ever for a championship game — staring down, Luke Hancock grabbed the game and made it his.

As if to say to Michigan, which seconds before had seemed a team of destiny, “We are the champions, this game shall be ours.”

In the second half, Peyton Siva grabbed the baton, becoming the reigning maestro of March Madness

After the break, Louisville’s point guard tallied 14 points, grabbed three rebounds, pilfered the ball twice, and dished out a couple of assists. Stunning 20-minute stats, but they hardly reflect how the game became his.

Siva was steady. Siva was relentless. Siva was in charge. Siva scored on an alley-oop for the ages. Crunch time was but a frolic for the winner of the Frances Pomeroy Naismith Award, bestowed earlier in the weekend for his loyalty, leadership and all-around excellence.

To understand how he could perform so coolly at this championship level, picture this moment from his youth.

Young Peyton Siva is 13 years old. His depressed father, whom he loves dearly, is missing. The youngster knows that danger lurks, that action is critical. Seizing the moment with a maturity beyond his tender years, he grabs the car keys and drives the mean streets in search of his dad.

Whom he finds, stoned, beaten down, gun in hand, ready to cease the painful breaths that plague him, ready to kill the demons that bedevil him.

Years later in a titanic basketball struggle, Peyton Siva proves he is as titanium tough at title time as in real life.

With the Cards down three early in the second stanza, he stole the ball, then grabbed a rebound and scored to cut the margin to one. Seconds later he did it again, this time for a 56-52 Cardinal advantage. Then again to maintain that lead after a Michigan score.

As if to say, “We are the champions, this game shall be ours.”

Champions are built on a strong foundation.

Consider Gorgui Dieng, an afterthought of a recruit, born in the hoops hotbed of Kebemer, Senegal, who provided 38 minutes of rock-solid steadiness. He scored eight points, snared eight rebounds. He blocked three shots, dominated the paint, and led U of L with six astonishing assists.

He wasn’t the only Cardinal carrying the heavy load.

Consider Chane Behanan, the undersized power forward who started the season on the bench in street clothes, lips zipped, suspended.

There wasn’t a Cardinal who played that didn’t contribute in some meaningful manner. Even Russ Smith, who was off his feed. His lone three-pointer was key, giving Louisville its first five-point lead with 13:28 to play.

Wayne Blackshear tallied Louisville’s first five points of the game. He scored the first Cardinal points after halftime, a three for the team’s first two-point lead of the game. He played relentless defense to the point of exhaustion.

Consider now Rick Pitino, Louisville’s second Hall of Fame coach, the only coach in the history of the game to win a title at two different schools, the mentor — after he said no to, ironically, Michigan — hired 12 years ago to salvage the reputation of this proud program.

Which, beleaguered but undaunted, he has done. While allowing this particular Cardinal gang to steal his heart like none before.

The University of Louisville now has three championship trophies, one of only eight schools with that number. It is one of only six schools to accomplish the feat under different coaches.

Consider the Louisville Cardinals, 35-5, who overcame adversity and two 12-point Final Four deficits, steady under pressure, forged to brotherhood in the crucible of competition.

Consider the Louisville Cardinals, a band of brothers who never withered, winners of 16 in a row including the one that mattered most on the final Monday of the season.

Cut the nets. Fire up the tattoo gun. The University of Louisville Cardinals are the 2013 NCAA Men’s Basketball Champions.