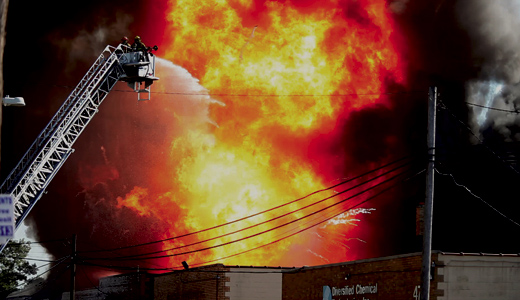 Detroit is the hottest town in the country, but not in a good way. The city sees an average of 30 fires a night, easily the most of any major U.S. metropolitan area. What would be an incredible stress on any fire department is particularly harrowing in the case of Detroit’s, which, like the city’s population, has dwindled to half since 1950.

This exodus has left more than 80,000 abandoned properties in its wake — what firefighters here call “kindling” for an unusually high number of arsonists. What’s worse is that this post-industrial depletion has left the D.F.D. strapped for cash. Its engines, firehouses and equipment are falling apart with no money to replace them.

It’s hard to believe that one of the concerns going into the production of “Burn,” a new documentary that follows the D.F.D. for over a year, was that the crew would not see enough action to make a compelling film. Directors Tom Putnam and Brenna Sanchez ended up shooting 21 fires in only their first two days of trailing Engine Company 50. Sadly, those blazes amount to a slow couple of days in Detroit.

From the opening, Putnam and Sanchez push viewers directly into the heat, building fiery sequences that could pass for big-budget, Hollywood pyrotechnics. We quickly become acquainted with Engine 50’s unique method for fighting fires with slow motion, too-close-for-comfort camera work. Unlike most of the world’s technique of dousing from the outside, Detroit’s E50 charges into burning structures and sprays from the inside out. This is a faster way of extinguishing flames, but also allows the firefighters to be certain that the vacant structures they bravely enter are actually vacant.

This inside-out method is, obviously, incredibly dangerous. This is evidenced not only by the fantastic, how did they get that shot photography, but the heartbreaking injuries that befall some of these men. Perhaps equally difficult are the rich, almost painfully slow dolly shots of a crumbling, once great Detroit. To call this “urban decay” would be putting it mildly — for that matter, so would terms like “war zone.” There are places here that appear post-nuclear — factories and warehouses ripped open decades ago, now reclaimed by wilderness.

“Thirty fires a night for 30 years. That’s how you destroy a city,” one firefighter says before heading out for a call.

Dave Parnell, another fireman and central character in “Burn,” has lived and worked in the district for all three of those decades. When describing what he’s seen over the course of his career — and the eight vacant homes that threaten his block — Parnell says Detroit is like Katrina without the storm.

Denis Leary, the TV star behind the firefighter drama “Rescue Me,” is the executive producer of “Burn.” The documentary seems to benefit from this association, both in its rollicking “action” sequences that are spiked with local, hard rock acts like The Stooges and Ted “Motor City Madman” Nugent, as well as in the obvious care for the material that Leary expresses in both his TV show and this new film.