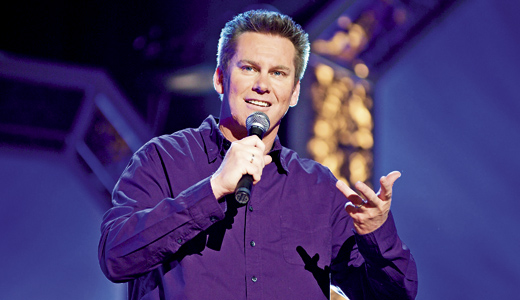 After three decades on the road, Brian Regan has become one of the most respected comedians around, performing in front of millions. He has recently appeared with peers/fans like Marc Maron on the “WTF” podcast and Jerry Seinfeld on the video series “Comedians in Cars Getting Coffee.”

LEO: How many years have you been coming through Louisville now?
Brian Regan: I can’t even begin to remember. I mean, I started there playing clubs two decades ago, so at least 20 years — but it’s always a blast.

LEO: Two decades of comedy?
BR: Umm … I started doing comedy in 1904 … well, it feels like it, at least. Actually, I’ve been doing comedy for 30 years now, right out of college, and been doing it ever since.

LEO: There are eight children in your family; two of you are professional comedians (Brian and brother Dennis). Was that a way for you all to stand out in the crowd?
BR: It’s interesting, my parents have eight kids and there are only four careers among them. Two stand-up comedians, two firefighters, two schoolteachers and two salesmen. My parents try to even the stories out because most people wanna talk about me or Dennis — but they have to make it even stevens.

LEO: You’ve said that Steve Martin was a big influence on you. Do you remember the first time you heard Let’s Get Small?
BR: You know, with eight kids, I didn’t have many albums. It was mostly, for me, watching him on television — his stuff was just so different from other stand-ups. Every other stand-up at the time was real and plausible, talking about real things; Steve Martin was kind of side-stepping that and making fun of show business … stand-up comedy … himself. It was just a really weird angle to look at things. So I don’t really remember the first time I saw him, but I remember he was the first one that I would look up in TV Guide and see when he was going to be on again.

LEO: Do you carry a similar tongue-in-cheek view of show business?
BR: Yeah, but not to the degree that he used to. His whole act came from an absurd point of view. I like to throw some of that into my bits now and then, but generally, I like to keep my material rooted in reality. If I’m on stage talking about my kids or things going on in the world, I want my audience, for the most part, to connect with the same things that I’m having fun with up there.

LEO: Your career has swelled to the point where you don’t get to do clubs much anymore. Do you miss it?
BR: Yeah, I did a couple of comedy clubs last summer for that very reason, and I’ve asked them to book a couple more this coming summer, as well. It’s just to experience that small, intimate kind of thing — because last year when I did it, the very first club I did, I got on stage and the table in front of me had this giant bucket of beer sitting on the table. And I thought to myself, “Wow, I’m gonna have to be pretty funny to overcome a bucket of beer.”

LEO: Not getting to be in the clubs as much, how do you work out new material?
BR: I do it in the theaters. When I first started in the theaters, I was less inclined to do new stuff because I figured people were paying more and wanted to see a tight show. But after a while, I needed to write and I needed to grow, so I forced myself to throw it in there. I’m just more inclined to bookend new stuff with much more dependable material.

LEO: When you’re done, what is the one piece of your work that would best represent your career?
BR: That first CD. Up until that point, I was just a guy in a club; people weren’t showing up for me, they were showing up for comedy, and I happened to be the guy on stage. But after that CD, people came up and started saying that they were fans of mine. Fans! I’d never even heard that word before. So I guess, in the end, it has to be the beginning … right? That makes sense.