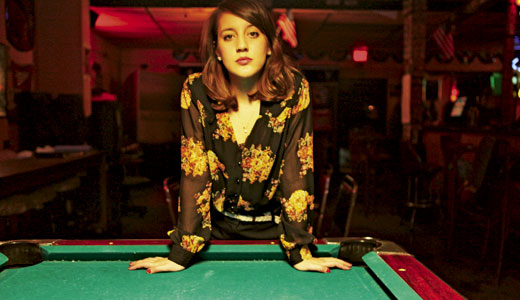 The come-hither pose Caitlin Rose strikes on the cover of her new album, The Stand-In, evokes a bygone era of cinema. Her dark hair styled in a lacquered 1940s wave, she gazes over her shoulder in a doe-eyed pout, an invitation to her performances on 12 remarkable songs. Despite its tongue-in-cheek title, Rose is all method actor, inhabiting the various characters with aplomb.

“It’s like any other writer,” she explains. “You’re taking things from personal experiences, and you’re living through these characters, but you’re putting your own lives into it.”

Rose’s debut full-length, 2010’s Own Side Now, was more straightforward, a cinéma vérité rendering of bedroom talk and confessional asides that came to grate on her during the endless touring that followed. “Once you sing the same songs every night to so many people — and try and relive that every time — it just gets a little bit exhausting,” she says. “With The Stand-In, I really just wanted to do something a little bit more free … where I could more inhabit the songs, rather than relive experiences.”

Longtime collaborators Jordan Lehning and Skylar Wilson assisted in co-writing many of The Stand-In’s songs, spending evenings working up melodies and hooks and sketching out characters. “We’d buy a bottle of bourbon and sit around in my living room and brainstorm these kind of ne’er-do-well motherfuckers and really try to put ourselves in their shoes,” Rose says, “because I think we’ve all been there.”

On “Waitin’,” Rose laments the demise of a relationship doomed from the start, her scalding vocals building in intensity over a moody arrangement featuring organ, harpsichord and electric guitar against the heightened tension of a kick drum. The trio based the gentle countrypolitan ballad “Pink Champagne” on a Joan Didion essay, detailing “visions of Chantilly lace” and the frenzied passions that result in a Las Vegas wedding.

Album opener “No One to Call” grounds the record in pure Americana, a gritty electric guitar paired with piano and a twangy pedal steel, as Rose seems to offer commentary on the state of modern music, confessing, So long ago my radio heart got broken/Now the songs I wanna hear they never play.

She laughs at a mention of that indictment. “That song actually grew out of when we lost our college station here (in Nashville),” she says. “A very large part of my growing up was calling in to these radio stations and saying, ‘Oh my God, what was that song?’ and finding out it was ‘Chocolate Jesus’ by Tom Waits. Those moments are just so few and far between now. It always bums me out to think that all these high school kids growing up don’t have the same thing. They have podcasts, but they don’t have that mystery, and I think it’s a shame.”

Rose also looks to the past as inspiration for her own career. When Own Side Now was released, she found herself being compared by many critics to Linda Ronstadt, long one of her musical heroines. The parallel is appropriate — Ronstadt practically invented the female concept album, interpreting songs that were both character-driven and cinematic in scope, like the ones found on The Stand-In.

“Linda Ronstadt always made a record that was better and better and better,” Rose says. “Her first cycle of records — like the first six or seven — they just got better every time. (They) all have this really amazing build. It’s like once you get up to (fifth album) Heart Like a Wheel, there’s a culmination of everything. And I see myself doing that in a different way. I feel like it’s all about a build for me, building on what I’ve learned and trying to make something better.”

Rose is gratified critics have noticed this progression with The Stand-In, which has already been named “one of the first truly great Americana albums of 2013” by Uncut. Yet she lightly brushes away such praise, wryly observing, “It is still pretty early in the year.” What truly matters, Rose says, is her own personal growth as a songwriter and being able to relate those songs to her fans.

“In story-songs, the key is to find the sentiment, to find the emotion that people will relate to,” she explains in true method actor fashion. “It’s not so much to just rehash a story. That’s how I’ve always felt about it.”