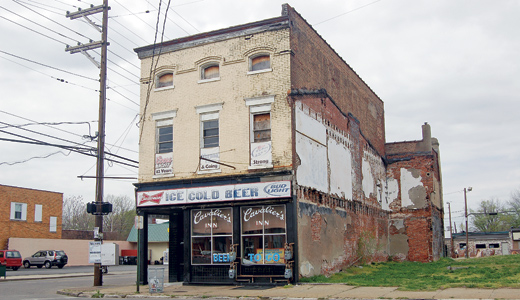 Since the Great Recession, dollar stores and their rock-bottom prices have capitalized on the diminished incomes and increased anxieties of Americans in poor neighborhoods in cities across the country.

In Louisville, nowhere has this phenomenon been more prevalent than in Portland, where residents and community groups have been waging a war to fight the influx of these businesses — particularly the Goodlettsville, Tenn.-based Dollar General, which has been aggressively expanding in the post-recession economy — as the chain seeks to bolster its revenue by adding alcohol sales in Louisville outlets.

“We’ve watched (West) Market Street fall and fall and fall,” said Portland resident and activist John Owen in a public comment hearing before the Metro Council on Feb. 28. “And these cast iron buildings that may seem old and dumpy have special meaning to us that live in communities like Portland. We don’t want a metal building on Market Street. We got that with a new Dollar General and half-a-block of parking at 17th and Market. It looks totally out of place.”

Pam Rice, executive director for Portland’s Neighborhood House — Kentucky’s oldest settlement house and a social services beacon in the neighborhood — says the recent dollar store proliferation in Portland and across west and south Louisville and the liquor licenses they seek is a public health and safety issue that cannot be ignored.

“The whole concern from folks in our neighborhood is, when you get a Dollar General, they can get a liquor license after they’ve come in, and then there’s one more place to sell liquor in Portland, and we are already oversaturated,” she says. Since last August, Dollar General has sought approximately 24 such licenses throughout Louisville, and the Metro Office of Alcoholic Beverage Control has granted eight.

Funded by a grant from the Substance Abuse and Mental Health Administration, the neighborhood’s community organization, Portland Now!, has sought to engage Portland youth and community members over the last decade to curb the deleterious effects of alcohol over-saturation in their own backyard, focusing on substance abuse prevention, planning and programming. But the money to combat the likes of aggressively expanding chain stores like Dollar General will soon dry up when funding expires this September.

“What a lot of social research shows is that the higher the density of alcohol outlets, the higher the rates of all types of crime and … higher underage consumption,” says Jackie McComb, project director for the Portland Now! prevention partnership, which implements the federal grant money. “So it becomes an availability question. The more of a substance that is available, the more it ends up being used and the more social problems result.”

Due to west Louisville’s higher-than-average density of alcohol licenses, McComb says the “Trojan horse” effect of dollar stores setting up shop then applying for ABC licenses exacerbates the boilerplate problems of crime and ill health in those areas.

With each new ABC license, she says members of Portland Now! and other community activists “are constantly scrambling to coordinate some kind of opposition campaign to each new license, and it becomes kind of tiring. It really takes your attention away from other things they could be working on.”

An April 11 report by the Centers for Disease Control and Prevention buttresses McComb’s claims. In it, the CDC reviewed 88 studies on the correlation between the density of alcohol outlets and concentrations of crime, poverty and health, concluding that “evidence-based strategies such as alcohol outlet density reduction” will “create healthier and safer communities.” One study conducted in Newark, N.J., showed a 1:1 ratio between alcohol outlets and crime. Another study in New Orleans estimated that for every 10 percent increase in density of alcohol outlets selling booze for off-premises consumption, the city’s homicide rate would rise 2.4 percent.

“Here in Portland, we have one (alcohol) outlet per 500 people,” McComb says. “So that’s at least twice as high as other parts of the city.”

Further complicating matters is an Aug. 12, 2012, ruling by U.S. District Judge John G. Heyburn II allowing Kentucky grocery stores to sell liquor. Heyburn did not immediately enforce the ruling, leaving it up to state legislators to take action to tweak the laws, which lawmakers neglected to do in the most recent session.

“Judge Heyburn’s decision and the lack of action by the General Assembly open the door for those type businesses to apply for licenses to sell alcohol,” Portland Councilwoman Cheri Bryant Hamilton, D-5, says in an email. “That means we will have a dramatic increase in those outlets selling beer, malt beverages and liquor in establishments frequented by minors all over our neighborhoods.”

“If you have a very high concentration of liquor stores, as a result you have higher crime rates, then other types of businesses and/or residential development are less likely to be attracted to the neighborhood,” McComb says. “It’s sort of a self-perpetuating cycle of negative economic development.”

Marianne Zickuhr, executive director for the nonprofit Preservation Louisville Inc., says that a “dollar store” mentality is converging on west Louisville, to the detriment of neighborhood identity and character.

“I grew up in Portland. I pay a lot of attention to what goes on there,” Zickuhr says. “And to see these businesses continually try to prey on what some people in Louisville might refer to as underserved areas, and low-income housing areas, the West End just deserves better, and it definitely doesn’t need another … nondescript box that won’t say anything about who we are, what we need, and what I think that neighborhood really deserves.”

But rumors that Dollar General will continue its expansion — potentially at the cost of Portland’s deteriorating historic structures — persist. There’s been talk of a potential expansion into the former Unique Thrift store at 617 Carter St. and the Cavalier Building, a two-story brick building on West Market Street that is currently awaiting historic status designation by the Metro Landmarks Commission following a Jan. 16 vote to start the process.

Councilwoman Hamilton says the developer on behalf of Dollar General is working with Portland Now! “on a new design which would maintain the Cavalier building and bring the proposed dollar store flush to it,” thereby sparing its demise.

Hamilton says she will unveil the plans at a zoning meeting this week.

However, when asked to confirm specific plans for store development in the aforementioned locations, Dollar General spokesman Dan MacDonald says via email, “While our business is growing rapidly, at this time we do not have plans to occupy the former Unique Thrift store in Louisville’s Portland Neighborhood or in the Cavalier Building on West Market Street.”

Further, MacDonald defends the Dollar General’s sale of beer and wine (they do not sell liquor) in some stores, saying they are “sensitive to community concerns” and have embraced a responsible selling model: “Dollar General has implemented policies that include: strict zero-tolerance ID checks, no single-serving sales, no liquor sales, and no on-premise consumption.”