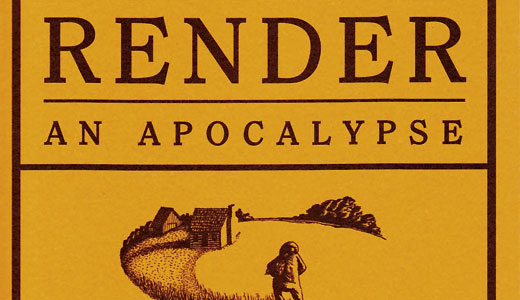 In the annals of Kentucky poetry, a few names stand out. Robert Penn Warren, the first U.S. Poet Laureate, comes to mind. Wendell Berry is another. Rebecca Gayle Howell, author of “Render / An Apocalypse,” may now count herself in Kentucky’s pantheon, alongside contemporary poets Frank X. Walker, Ada Limón and Maurice Manning.

The book begins with an epigram by poet Adrienne Rich: “Without tenderness, we are in hell.” Over the course of the 23 poems, Howell details the hell we must live through and the attention to suffering required of us. “It’s true,” Howell says, “without tenderness we are in hell. And that’s where the book begins — with a man trying to find his way out of his own personal hell, through the land, through his use and misuse of animals, through what the animals know that he doesn’t know, through his frustration and startling heartlessness. To remember tenderness is his only way out. It has been my own only hope many times, but I see it’s true in larger arenas as well. In his recent Jefferson Lecture, (Wendell) Berry put it another way: ‘It all turns on affection.’ I think it does.”

Surprisingly, Howell herself did not grow up on the farm; instead, her parents owned a diner in Elizabethtown. “The book’s narrative element comes from research,” Howell admits. “While I taught writing in Eastern Kentucky, I talked with former students and their families. Later I interviewed my mother, who grew up on a subsistence farm. Later still I read histories and oral histories and manuals. I read Wendell Berry daily.”

From this research comes a book that combines the darker shades of Robert Frost with unwavering visions of the blood and brutality of contemporary living. “Render / An Apocalypse” is a book with a multifaceted address of the concept of “rendering”: Howell not only talks of rendering animals, but of rendering the truth of our situation, a life where, as she says in “A Calendar of Blazing Days,” the long poem that closes the book, “You’ve made food of death.”

Gather her organs up
into your arms
like you once did your mother’s robes
when you were a boy who knew nothing.

“For me, the book is about love,” Howell says. “It is most concerned with the consequences of forgetting love, or, as I said, tenderness. Tenderness is our sustenance. In other words, and I’m only repeating Berry here, our capacity to forget affection is directly proportional to our capacity to destroy our own habitat. And each other. And ourselves.”

Poems like this are born of a life in hardscrabble Kentucky. It’s no surprise one of the dominant themes of these poems is work. What does it mean to feed oneself by killing? What does it mean to live in such a way that something must be destroyed? Howell, by seeing her parents struggle and exhaust themselves in work, clearly identifies with the working class. Her mother, aside from helping her family subsist, worked most of her life as a waitress. Howell’s father grew up working in a hamburger joint and spent most of his life as a fry cook.

The young poet herself started working at her parent’s diner when she was all of 8 years old. “Work, for me, is a guide, a morality I trust,” she insists.

In the face of this work, Howell’s poems suggest that our identity is marred. Two poems, for example, seem to stand against each other, as with “How to Be Civilized” and “How to Be an Animal.” We see the life of agriculture as “civilized,” yet its particulars require us to be animals. One of Howell’s tasks is to reconcile this conflict of our humanity. “We assume a concrete wall stands between what it means to be civilized and what it means to be wild — and that the former constitutes human endeavor and achievement,” Howell explains. “The animals in these poems would disagree.”

The end of such a struggle is love. “I have reverence for what I do not know,” Howell says. “‘How to Kill a Hog’ is the poem in which the ‘you,’ who has been, up to this point, a man struggling to remember his own sublime and animal soul, releases himself into what he cannot control. If there is any definition of love, it’s probably that.”