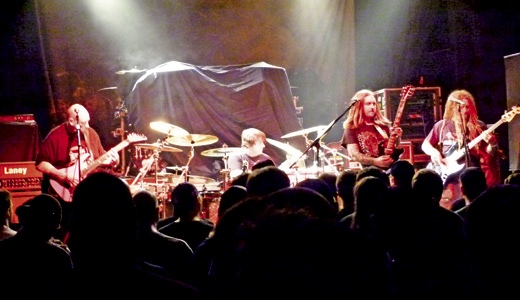 No rest for the wicked

“I’ve been getting good feedback on it so far. Well, at least from my friends,” laughs Brian Omer about the new album by his band Stonecutters. The band celebrates its release with a show Saturday at Headliners.

As founder, vocalist and one of the guitarists in Stonecutters, Omer — a heavy-metal lifer whose other passions are for classic horror movies and similarly over-the-top paintings — has found the perfect vehicle for his obsessions. Previously known for his work with My Own Victim, who toured the world and then came to an end as the music industry was going through its own upheavals, Omer isn’t going anywhere soon, though he prefers CDs and vinyl to digital downloads.

He’s paid his bills through music for 15 years now — clerking at ear X-tacy, then teaching guitar at Mom’s Music and now at Guitar Center. A student of his genre, Omer was thrilled to discover recently that the late guitar master Randy Rhoads had also been a teacher. It’s another connection to past greats for Stonecutters, who shared stages last year with everyone from Anthrax to Down to Goatwhore.

Their new, third studio album, recorded by Kevin Ratterman in his La La Land studios over four days in February, is called Creatio Ex Nihil. It’s the first Stonecutters album for guitarist Chris Leffler, another metal vet, who approached his now-bandmates to ask about joining. It was a new beginning for the band, says Omer, who praises Leffler as one of the best guitarists he’s ever seen — high praise from a guy who gets paid by 50 regular students.

Creatio Ex Nihil translates as “Creation in Annihilation.” While not strictly a concept album, there is a recurring theme of annihilation, anger and frustration running through the songs. It’s a healthy release of energy from a band that’s never been happier.

“I think this is definitely the best thing I’ve done. You can hear a progression, from the first album to this one. I’m excited for people to hear it,” says Omer.