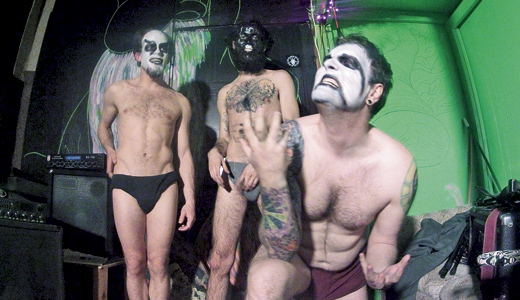 Have you ever wanted to call back the deviant succubus that entered your life like a car crash? Turns out she’s an exemplar of Kentucky Goddamn, a barbarous three-piece who spawned in 2008 and have since marked an epoch in Louisville thrash.

With one demo and an upcoming album, Weird Bath, Kentucky Goddamn is comprised of three: guitarist/vocalist Patrick Burns, bassist/vocalist Jesse Best, and drummer/vocalist Oliver Carter. This daunting trifecta comes from different corners of what can collectively be called punk: Carter played hardcore in Black Cloud, Burns dabbled with progressive metal in Anchor, while Best performed in garage bands across Louisville.

The trio’s taste for thrash fusion and inane non-sequiturs (hence songs like “Sharkansas” and “Interhorse”) wasn’t hatched solely by the band. “Our writing is influenced by the Melvins. Boris is an influence, too. Punk is our backbone,” Burns explains. “We’ve stopped playing shows to write new material. For a while, we couldn’t play because I went to Utah for six months and met a squirrel. I got a job in environmental conservation.”

The band has been writing music again and will release their new album on April 20. Claiming a powerfully diversified background and in search of new territory, Burns says, “If we ever go on tour, it would only be a small one. Probably for a few weeks over the summer.”

“We’re releasing Weird Bath on our own label, Kritikal Serf,” Best adds. “The label is also a way that we can cross-promote local bands who’ve been around for a while and book shows.”

Kentucky Goddamn rents a practice space in a compartmentalized art-house parallel to a dismal computer recycling plant downtown. The room features one of those awesome climb-up bunks you’d see in those ’90s kids TV shows.

“You’re more than welcome to join us,” Burns asserts in regard to the ping-pong outing later that night. “We’re all quiet dudes publicly. Not all of us are public speakers, so we just yell.”