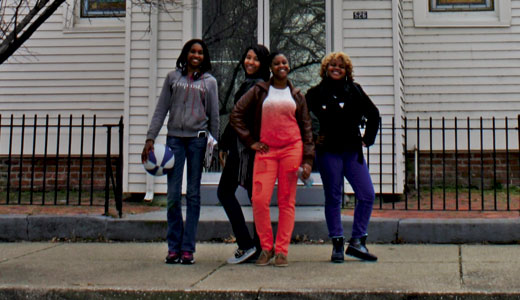 When I went to meet artist-in-residence C. Ryan Patterson at St. Peter Claver Parish in Smoketown last week to discuss his new project, the Smoketown Social Club, I talked to him for a good five minutes before I realized he was the person I was there to meet. A tall, friendly man from Baltimore in a baseball hat and T-shirt, he was about as unassuming and affable as a person could be, and I was embarrassed. Approachability is part of his discipline as a community artist; instead of adhering to strictly making art objects, Patterson works with communities to use art as a tool for promoting social cohesion and collective action. Tapped to come to Louisville by the Kentucky School of Art to work with their students to lead a semester’s worth of community organizing, Patterson’s goal is to generate and document memories, conversation and ideas about Smoketown — a neighborhood that has experienced substantial upheaval brought on by the demolition of the Sheppard Square public housing complex last summer.

This semester, Patterson’s students will be collaborating with neighborhood residents on art projects, including an all-ages Saturday art club, a town hall meeting, an artist lecture and a block party. “How is this art?,” you may ask.

The hybridized practice of community art often involves aspects of grassroots organization, performance, investigative journalism and object making. It also tends to question the traditional separation between artist and observer. Although the history of community art can be traced back to the dawn of time, recent incarnations across the country see artists and art institutions looking for ways to use art to serve social need. A replica of the childhood home of artist Mike Kelley will soon be parked in front of the Detroit Institute of Art and will offer basic services such as haircuts, a community meeting space and mail services for the homeless, while a center for immigrants in New York is supported by the work of artist Tania Bruguera. “It’s time to return Marcel Duchamp’s urinal to the bathroom,” Bruguera said in a recent New York Times article.

Patterson doesn’t shy away from the fact that his students are demographically divergent from most of the residents of Smoketown. He sees this short-term project as an opportunity to make an impact — both experientially for his students, and hopefully for his community partners as well. His sincerity is disarming; in a letter addressed to the residents of Smoketown, he writes, “So, if you are walking down the street or looking out of your window, you may see some new faces doing some strange things in the name of ‘art’ in the next few weeks … please don’t cross the street or pull the shades, ask us what we are up to or share some history about the neighborhood …” At the end of the letter, he lists his cell phone number, making himself accessible to any member of the community and inviting their feedback, both positive and negative.

As someone who has not spent much time in the neighborhood since I was a student at Meyzeek Middle School in the ’90s, it was hard to fathom what a significant transition the neighborhood had been through until I saw the empty lots where Sheppard Square once stood. I can only imagine what that has meant for the people who live there. With the input of Smoketown residents, by the end of the semester, hopefully that will be easier to understand.

For updates on the project, visit smoketownsocialclub.tumblr.com.

April 26 — Opening Reception of “Community and Collaboration,” artwork and relevant documentation of the Smoketown Social Club Project, which runs through May 12. Kentucky School of Art, 849 S. Third St., 6 p.m.