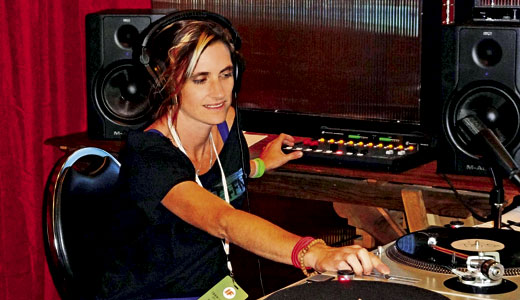 By definition, visual art is creativity that is seen. But some visual artists make work that is heard and not seen. Confused yet?

Listening to “sound art” is one of the goals of the new local radio station ART+FM, billed as an “intersection of art and radio.” They officially launched their full-time, 24/7 programming during the April 5 First Friday Trolley Hop from their new studio in NuLu.

While their debut was last year at the IdeaFestival, the nucleus for an art-based radio station has been peculating in the brain of general manager/president Sharon Scott for years. “It was a tiny idea,” she says. “I’ve always been interested in art and radio. (ART+FM’s) definition of artist is broad. It includes musicians, performers, writers, athletes, painters, photographers, sculptors, dancers, filmmakers, philosophers, scientists and more.”

Additional special events gave them the chance to continue testing the waters. They’ve broadcasted from such locations as the St. James Court Art Show, the Fund for the Arts Showcase and the Wendell Castle “Caligari” piano concert series at the Kentucky Museum of Art and Craft.

Scott says the station will cover music, talk radio and experimental. “Experimental projects — that’s the new thing. A third each, that’s what I eventually hope for. Now it’s mostly music and talk.”

The ART+FM DJs have regular weekly timeslots. “Most music shows are two hours, with talk shows one hour,” she says. “All are staffed by volunteers. People want to be heard.” Most of the current programming is local and live, but there will be prerecorded broadcasts coming from New York City, Los Angeles and Denmark.

New media artist Valerie Sullivan Fuchs is ART+FM’s artist-in-residence. “(It’s) a unique opportunity for me to introduce iconic well-known sound artists … to a larger audience from the point of view of an artist who works with sound,” she says. “It would be great to also leave in the archives something I create just for ART+FM.” Her show is called “Sonic Space.”

The program “Fleur de Arts” by Marianne Zickuhr will discuss the arts in Louisville, from what opportunities for participation there are, to what performances you shouldn’t miss, and preservation and history. “I hope to tap into all parts of the arts, cultural, architectural sides of our community,” she says. Her other show, “Vocalease,” will focus on singing.

Additional programs include “Cutting Edges” by Shawn Hennessey and Zach Brammel, described as “the intersection of visual art, music and culture in the postmodern world”; Kim Sorise’s “Global Grease”; and “The Medium is Sound” by Douglas Lucas.

For now, the way to listen to ART+FM is to stream it live from their website or with apps from iTunes or Google Play (links are on the website). A program guide and archives are also available. Scott wants to be on the FM dial by 2014. “I’m hoping by the beginning of next year, that’s realistic.”