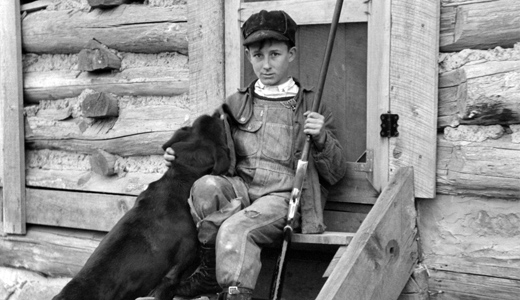 A good photograph can stand the test of time. The shimmering midtones, nuanced hues and thoughtful compositions of the “FSA (Farm Service Administration) in Kentucky” photographs illustrate this fact perfectly. The Library of Congress collection features rural Kentucky between 1935 and 1943 and is on display at U of L’s Ekstrom Library through the end of the month. Taken by various photographers, the body of work documents the damage done by the Great Depression and the Dust Bowl on economic development in rural America. Their original purpose was to make a compelling visual argument to support Franklin D. Roosevelt’s New Deal social aid programs. Some 13,000 of the 77,000 images from the project, selected by director Roy E. Stryker, are from Kentucky. While this exhibition is only a fraction of those photos, it documents people and places that may have otherwise been lost to the passage of time.

It’s easy to see how these images support the argument for government intervention — in a single room of photos, you see log cabin school houses full of eager children, horses pulling automobiles from dirt roads that have fallen into creeks, an impressive expanse of a swinging bridge suspended over a hollow in Jackson, Ky., vital enough to the town’s transportation infrastructure that people hauled groceries over its perilous stretch. Men carry a coffin down a muddy gulch, a mountain family stands outside their humble home with three generations of family — the conspicuous absence of electrical and telephone lines, paved roads and running water show the visual vestiges of economic atrophy.

Photographs of Louisville are also included, as the 1936 Great Flood was associated with the climatic upheaval that was the Dust Bowl. They also document the then “downtown business district,” complete with one of my favorite photos, of a parked junked-out jalopy with St. X scrawled on the side, and on the door it reads: “Ladies enter here (girls the other side).”

Despite the fact that these photos are essentially editorialized photojournalism, many show an understanding of the expressive potentialities of black-and-white photography as a medium. In one photo of a baptism in a river, the photographer creates a geographic feature of the crowd; in another, a crowd at a country fair appears in the dappled shade of a tree. The prints are beautiful and subtle, and many impress me with their clarity and nuance. ?

While viewing the show, I experienced the quiet realization that the people in these photos are the same people who may have held our hands or the hands of our parents — that the economic and climactic crisis they experienced would be echoed in our lifetime. How ironic that our television and Internet signals are clogged with the same debates regarding government intervention that their radio and telephone lines teamed with more than a half-century ago. Recommended for anyone interested in Americana, regional history or 20th century photography, “FSA in Kentucky” is a worthwhile journey into Kentucky’s past.