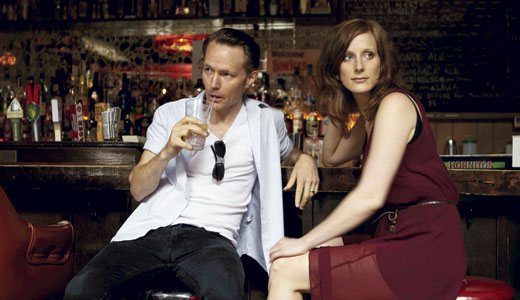 Whitehorse released their second full-length album, the memorably titled The Fate of the World Depends on This Kiss, last year, but they’re not exactly newcomers to the music business. Melissa McClelland and Luke Doucet established themselves in their native Canada well before their 2006 marriage helped them decide to make beautiful music together full-time.

Doucet began his career in the ’90s with the alt-rock band Veal and has since distinguished himself as one of the best guitarists of his generation. He joined Sarah McLachlan’s band at 19, a connection that would eventually lead him to produce three solo albums by McClelland, who often sang backing vocals for the star.

While both had their own careers, it only made sense to merge their musical desires as well. If nothing else, they would now be able to travel together, instead of being apart for months at a time, making their lives easier.

“Yeah — in most cases,” says McClelland, who laughs playfully at the idea. “No, it definitely is. For most people (in bands), you’re leaving somebody behind, so you’re always looking for when you get to go back home.”

As Whitehorse has picked up momentum over the past few years, they’ve made the road their home. They haven’t seen their Ontario home in almost a year, but are happy to get to do what makes them happiest.

Their full-time pairing began as a fun exercise, but McClelland says when they realized how rewarding it could be, they decided to take it more seriously, even taking on a new name that risked having to re-introduce themselves. They didn’t need to worry — people caught on quickly, and the Internet, which loves to discover new things, has helped them re-brand as a new thing, as opposed to the 30-something industry vets they actually are.

While they began playing together full-time five years ago, under their given names, it’s only in the last two that they became Whitehorse, taking the name from a remote northern Canada town. “It’s nice that we finally have a thing that originally felt like a side project, and now it’s completely taken over,” McClelland says. “It’s grown to be bigger than either of our solo projects before. It feels like an all-or-nothing thing right now.”

The pair reached another professional highlight last year when they headlined a concert at Toronto’s Massey Hall, the Carnegie Hall of Canada, open since 1894. To celebrate, they put together a live EP, The Road to Massey Hall, released last month. The collection was worked up from a set of songs by some of their favorite fellow Canadian songwriters, including Ron Sexsmith, Gordon Lightfoot, Blue Rodeo and Neil Young (who has also released his own Massey Hall live album).

“We’re from the Toronto area, so that’s the hall I grew up not far from,” McClelland says. “I saw so many people play at Massey Hall; I saw Gordon Lightfoot play there a couple times. It’s one of those legendary places, where, if you’re a kid and you know you want to grow up and be a musician, you have dreams of playing a room like that. When we booked that room, we knew it was significant for us, personally. We wanted to do something to celebrate that fact.”

While they pay homage to their past, they are also very much a modern band, utilizing technology to make their duo sound as electric and full as possible.

“Our show involves a lot more than just the two of us,” McClelland explains. “We have a looping pedal that we use quite a bit. We have drums, we have bass, we have tons of guitars, keys, lots of weird little mics and some percussion … the songs are quite different from the record, in a way. But then we strip it down and we share a single condenser mic and do Johnny-and-June style songs. So it’s kind of back and forth, between two stations, if you will.”

“It kind of grew into this monster,” she continues, detailing how the duo evolved from folk to fuzz. “It’s fun. It’s a lot for us to wrap our heads around musically, but I think that’s what makes the show good. We’re kind of risking it on stage every night.”